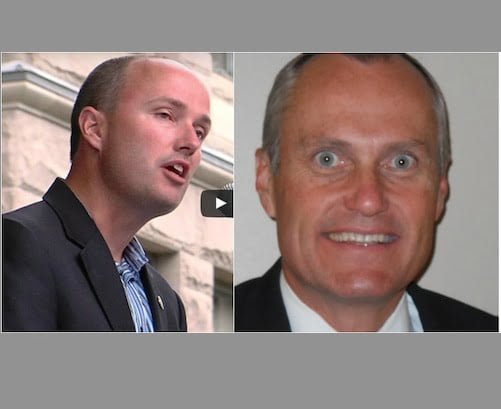 In an emotional speech at a vigil for the Orlando shooting victims on Monday, Utah Republican Lt. Governor Spencer Cox gave a message of support and solidarity to the LGBT community. He started off by describing himself as “a balding, youngish, middle-aged, straight, white, male, Republican politician” and said that he was not the type of person that would be expected to speak about the LGBT community in the wake of tragedy.

He spoke about the LGBT people he has met since taking office, saying, “You have been patient with me. You helped me learn the right letters of the alphabet in the right order even though you keep adding new ones. You have been kind to me,” he said. The video and transcript with Lt. Governor Spencer Cox’s full speech are below.

In contrast, I visited Georgia’s Lt. Governor Casey Cagle’s website and could find  no mention of Orlando at all! On his Twitter feed I saw a tweet in reference to his sympathies for a recent attack in Israel. “We are proud to #StandWithIsrael Prayers to all the families affected by this senseless act of terror”  I also saw his condolence for a Dr. Dugan, but I saw no tweets at all referencing the Orlando mass murder. The same applies to his Facebook page where again there is no mention of the Pulse attack targeting the LGBT community.

Other Georgia Republican politicians also failed to mention the Orlando massacre had anything to do with an attack on the LGBT community, but at  least they acknowledged it occurred.  Casey has been completely silent. Casey Cagle can’t find the time to offer sympathy for the biggest massacre in modern American history in a neighboring state? Shame on you Casey Cagle. But we shouldn’t be surprised in the least. Take a look at his past statements and actions towards the LGBT community.

We know how Cagle feels about the so-called “Religious Freedom” laws which have the sole purpose of enabling discrimination against the LGBT citizens in Georgia. In my article Georgia FADA: Fascism brought to you by fundamentalists I attempted to explain why these types of laws are so dangerous. Their sole intent is legalizing discrimination as a reaction to the SCOTUS decision regarding same-sex marriage.

Cagle also claims the great “silent majority” backs his discrimination bill. In a Q&A after it was thankfully vetoed Cagle had this to say. “The electorate seems to be more motivated than they’ve seemed in a long time. For me, the week after the session, and traveling a little around the state, this has been undoubtedly the biggest issue brought forward. And it’s been very consistent. I’ve seen the silent majority waking up, and this is one of the issues that has awakened them. The electorate will be more engaged this time.”

Casey Cagle invited also invited Paul Voorhees to the Georgia State Capitol to be the chaplain of the day in 2011. The Georgia Voice Reported below:

“Voorhees, the host of “Ranger Joe’s  God & Country” radio show  in Columbus, routinely posts racist and homophobic messages on his Facebook page, including an image of him with fellow speakers at a north Georgia college holding homophobic signs, another image of a heterosexual couple holding hands with the words “Straight Pride” and Voorhees commenting “gay life is like an acting role with a used barf bag,” and an image of the atomic bomb that the United States dropped over the Japanese city of Nagasaki in 1945 with Voorhees calling the victims “rice krispies.”

In other posts, Voorhees appears to compare an African-American looter to President Obama and posts an image showing the Devil supporting same-sex marriage.”

Perhaps now we know why Casey Cagle failed to mention the Orlando massacre. What a sad contrast between Georgia and Utah.

Thank you for being here tonight on this very solemn and somber occasion. I begin with an admission and an apology. First, I recognize fully that I am a balding, youngish, middle-aged straight, white, male, Republican, politician… with all of the expectations and privileges that come with those labels. I am probably not who you expected to hear from today.

I grew up in a small town and went to a small rural high school. There were some kids in my class that were different. Sometimes I wasn’t kind to them. I didn’t know it at the time, but I know now that they were gay. I will forever regret not treating them with the kindness, dignity and respect — the love — that they deserved. For that, I sincerely and humbly apologize.

Over the intervening years, my heart has changed. It has changed because of you. It has changed because I have gotten to know many of you. You have been patient with me. You helped me learn the right letters of the alphabet in the right order even though you keep adding new ones. You have been kind to me. Jim Dabakis even told me I dressed nice once, even though I know he was lying. You have treated me with the kindness, dignity, and respect — the love — that I very often did NOT deserve. And it has made me love you.

But now we are here. We are here because 49 beautiful, amazing people are gone. These are not just statistics. These were individuals. These are human beings. They each have a story. They each had dreams, goals, talents, friends, family. They are you and they are me. And one night they went out to relax, to laugh, to connect, to forget, to remember. And in a few minutes of chaos and terror, they were gone.

I believe that we can all agree we have come a long way as a society when it comes to our acceptance and understanding of the LGBTQ community (did I get that right?). However, there has been something about this tragedy that has very much troubled me. I believe that there is a question, two questions actually, that each of us needs to ask ourselves in our heart of hearts. And I am speaking now to the straight community. How did you feel when you heard that 49 people had been gunned down by a self-proclaimed terrorist? That’s the easy question. Here is the hard one: Did that feeling change when you found out the shooting was at a gay bar at 2 a.m. in the morning? If that feeling changed, then we are doing something wrong.

So now we find ourselves at a crossroads. A crossroads of hate and terror. How do we respond? How do you respond? Do we lash out with anger, hate and mistrust. Or do we, as Lincoln begged, appeal to the “better angels of our nature?”

Usually when tragedy occurs, we see our nation come together. I was saddened, yesterday to see far too many retreating to their over-worn policy corners and demagoguery. Let me be clear, there are no simple policy answers to this tragedy. Beware of anyone who tells you that they have the easy solution. It doesn’t exist. And I can assure you this — that calling people idiots, communists, fascists or bigots on Facebook is not going to change any hearts or minds. Today we need fewer Republicans and fewer Democrats. Today we need more Americans.

But just because an easy solution doesn’t exist, doesn’t mean we shouldn’t try. The greatest generations in the history of the world were never innately great. They became great because of how they responded in the face of evil. Their humanity is measured by their response to hate and terror.

I truly believe that this is the defining issue of our generation. Can we be brave? Can we be strong? Can we be kind and, perhaps, even happy, in the face of atrocious acts of hate and terrorism? Do we find a way to unite? Or do these atrocities further corrode and divide our torn nation? Can we, the citizens of the great state of Utah, lead the nation with love in the face of adversity? Can WE become a greatest generation?

I promise we can. But I also promise it will never happen if we leave it to the politicians. Ultimately, there is only one way for us to come together. It must happen at a personal level. We must learn to truly love one another.

The Prophet Muhammad is reported to have said: “You will not enter paradise until you believe, and you will not believe until you love one another.”

Jesus said, “Love your enemies, bless them that curse you, do good to them that hate you, and pray for them which despitefully use you and persecute you.”

And so may we leave today, with a resolve to be a little kinder. May we try to listen more and talk less. May we forgive someone that has wronged us. And perhaps, most importantly, try to love someone that is different than us. For my straight friends, might I suggest starting with someone who is gay.

I leave you with the words of Lyndon B. Johnson. They were spoken at another very sad time in our history, the death of President John F. Kennedy. He said this:

“Our enemies have always made the same mistake. In my lifetime — in depression and in war — they have awaited our defeat. Each time, from the secret places of the American heart, came forth the faith they could not see or that they could not even imagine. It brought us victory. And it will again. For this is what America is all about.”

On behalf of the 3 million people of the state of Utah, We Are Orlando. We love you. And I love you.

One thought on “Love vs. Hate: Georgia and Utah Lt. Governors responses to Orlando”