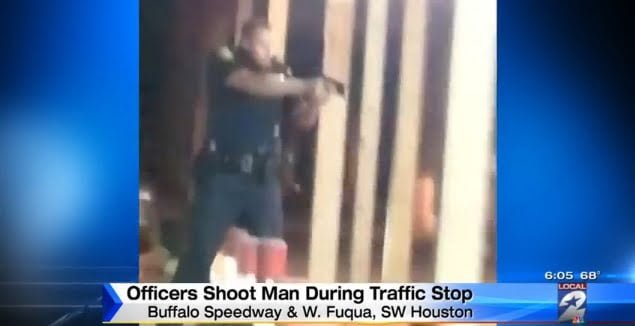 Houston, Texas – This week, Houston police shot an unarmed man multiple times because he was acting suspicious and not obeying their commands. Two officers fired multiple shots at 38-year old Mike Walker, with some of those shots being fired even after it was obvious that he did not have a gun.

The shooting occurred in the parking lot of a convenience store on Buffalo Speedway and West Fuqua, in front of multiple witnesses.

Walker was the passenger in a car that was pulled over for making an illegal lane change, but whether or not the driver was actually guilty of any traffic violations has not yet been proven. When the driver of the vehicle saw the police lights behind him, he pulled into a nearby Sunny’s Food Store.

According to police, they ordered the occupants of the car to sit still and put their hands up, and then they claim that Walker ignored their orders and reached under his seat. That’s when police immediately opened fire.

At that point, Walker, after already being shot, got out of the car and began to strip off his clothes. Clearly unarmed and not posing a threat, another officer got involved and shot him several more times.

“When I was about to walk into the store, I heard gunshots, so immediately I turned around and grabbed my son and got us both on the ground,” witness Laquesha Spencer told 2 News.

“I’m telling him ‘Lay down, they are going to shoot you. They are going to kill you.’ And I guess he was in shock, he had already been shot three times, because I heard multiple gunshots,” Spencer said.

There were a number of witnesses who overwhelmingly agreed that the police used excessive force and unnecessarily escalated the situation.

In a statement to the media, Houston Police Department spokesman Victor Senties said:

“They saw the doors open up, one of the officers gave repeated verbal commands to stay inside the vehicle, then the officer went to brace the door to keep him (the passenger) inside. At one point he had his arm all the way under the seat, right up to the elbow, as if he was trying to grab something. The officer gave him commands to show his hands … at that point the officer was in fear of his life and that of his partner. The second officer seeing the suspect try to reach into his waistband and into his sweater as if he was trying to locate something. He also feared for his safety and once he was out of the area, where there were people behind him the officer discharged his weapon as well.”

However, many witnesses dispute this struggle, and say that the man was simply ignoring officers, but not being aggressive in any way.

According to the victims mother, the police would not let her into the hospital to see her son, and had guarded his room for hours after the shooting.

“I was there ’till about 5 a.m. this morning, they have a police officer in his room and they won’t let me in there. He didn’t even have a gun. He’s never owned a weapon, he didn’t have one on him,” 53-year-old Laura Walker told reporters.

After shooting Walker, Police then arrested the driver and impounded his car to search for weapons, but they have not said if the driver, or Walker will face any charges.

Walker is currently being treated at Ben Taub Hospital where he is listed in serious, but stable condition.