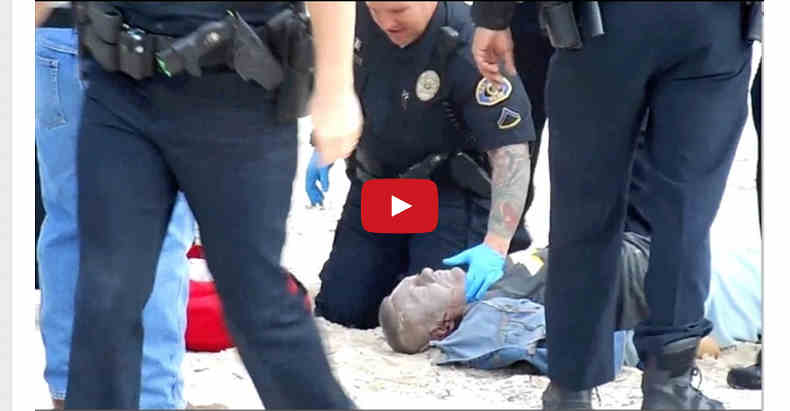 “I dropped like a f**king bomb on his head!” “I tased a motherf**ker in custody today. I don’t care. I gotta call my PBA rep… when you kill someone… I already called them.”

Key West, FL — An internal investigation by the Key West Police department, into the in-custody death of 61-year-old Charles Eimers has resulted in, what the department refers to as “discipline,” for two officers.

The two officers on the receiving end of the “discipline” are Gary Lee Lovette and Henry del Valle, according to a report released Monday by police.

Lovette, according to a Florida Department of Law Enforcement summary released this past August, said on a Taser recording “I dropped like a f**king bomb on his [Eimers’] head.”

Lovette is expected to receive a five-day suspension without pay for actions including inappropriate remarks he made to employees of a Key West cupcake store that “gave the impression he had done something purposely wrong to cause Mr. Eimers’ death.”

According to KeysInfoNet, Lovette is also being punished for comments on a Taser recording that included words to co-workers and family members “that were lies and exaggerations concerning his actions during the Eimers incident.”

del Valle has received a letter of reprimand for engaging in “an unauthorized vehicle pursuit” of Eimers, including by not continuously operating his emergency lights and sirens during the pursuit.

Both officers can challenge their punishments. Police Chief Donie Lee said the disciplines and a majority of recommendations in the report have to do with policy issues.

“These policy violations had absolutely nothing to do with Mr. Eimers’ death,” Lee said.

The lack of punishment of these two officers however, is only the tip of the iceberg in a much larger tragedy of justice facilitated by the Key West Police Department and the Florida Department of Law Enforcement.

The original incident happened on Thanksgiving of 2013 when Elmers allegedly sped off from a traffic stop, leading police on a chase. From there, the “official account” of what happened begins to fall apart.

Police first reported that after Eimers sped off he eventually stopped his car at the beach. Police said that Eimers then got out and collapsed into the sand, having never regained consciousness.

However, video evidence of the incident was released which contradicted these claims. In the video we clearly see Eimers exit his vehicle with his hands up and get on the ground, as police, with weapons drawn, ordered Eimers to do.

“I watched the video, and I had no words. Everything that I was told while I was here was a lie. He was murdered by those officers,” Treavor Eimers, son of Charles said after this video surfaced weeks later.

The police claimed that Eimers’ face was not in the sand and that he was not bleeding. However an additional video surfaced in November 2014, taken by a tourist which showed Eimers’ face covered in sand and blood coming from his ears.

The FDLE had the phone number of the iphone videographer in Colombia all along and knew that the video existed, but they never made the call. The Eimers’ family attorneys did.

The new video supported the civilian witnesses account, which is contrary to the testimony of certain police officers who claim Eimers was never face down in the sand. Civilian witnesses said Eimers’ face was “caked up with sand,” and that he had “sand in the mouth and nose.”

Eimers, unconscious and unresponsive was eventually brought to the hospital. After a week of unconsciousness, and being on life support, Treavor Eimers, made the difficult decision to pull the plug. Charles Eimers died on December 4, 2013.

Treavor says he had confidently assumed that an autopsy would be performed; it was also required by Florida law. However, with no logical explanation being offered, the police hurriedly shipped his body off to a funeral home and asked for it to be cremated, CBS reported.

This hurried response was not only against police protocol but also against the law and all of this was done without the consent of the family. Luckily, the funeral home did not get to the cremation in a timely fashion so Eimers’ body sat there for 7 days, eventually allowing for an autopsy.

After the evidence was nearly destroyed, an autopsy was finally performed, yielding highly suspect results. Mr. Eimers was found to have ten broken ribs, as well as wounds around both wrists. While no official explanations were offered on the cause of death, Monroe County Medical Examiner Dr. E. Scheuerman ruled out heart attack as a cause.

There are also the lies about the taser.

Originally Police admitted that a taser was “placed on the back of the subject” during the arrest, but according to police statements, no tasing was done to the victim. However, some eyewitnesses told The Blue Paper something quite different:

“They tased him in the neck,” said one witness who asked not to be identified, “and after that he didn’t move – he was out. Then they rolled him over and started compression.”

“I was about 30 feet away,” says another, “I saw him [a police officer] taser him [Eimers]. He didn’t lift the taser from his chest. I could see his legs jerking when they were tasing him… it lasted a good 6 minutes… The female cop was not involved in all that.”

The ten officers who were involved in the arrest all testified that he wasn’t tased. However, in a segment of the Taser video that was recorded inadvertently by the officer after the incident, he is heard saying to fellow officers that he did in fact taser Eimers. Lovette later claimed he was just kidding.

The following video was just released this week.

Officer Lovette: “Listen. I tased a motherf***er in custody today. I don’t care. I already called my PBA rep.”

Unknown person: “For what?”

Officer Lovette: [unintelligible] when you kill someone PB is first. I already called.”

Apparently enough people were duped into believing these contradictory and dishonest series of events, as put forward by the FDLE and the KWPD because a Grand Jury found that there was no probable cause for indictment. Sadly much of this evidence that you’ve just seen in this report, was never presented to them.

The cases of Eric Garner and Mike Brown are tragic, but so is the case of Charles Eimers. Why are we not hearing about this injustice on the MSM?

The family of Charles Eimers deserves justice, help spread awareness to this travesty of the legal system by sharing this story. #Justice for ALL those killed by police.