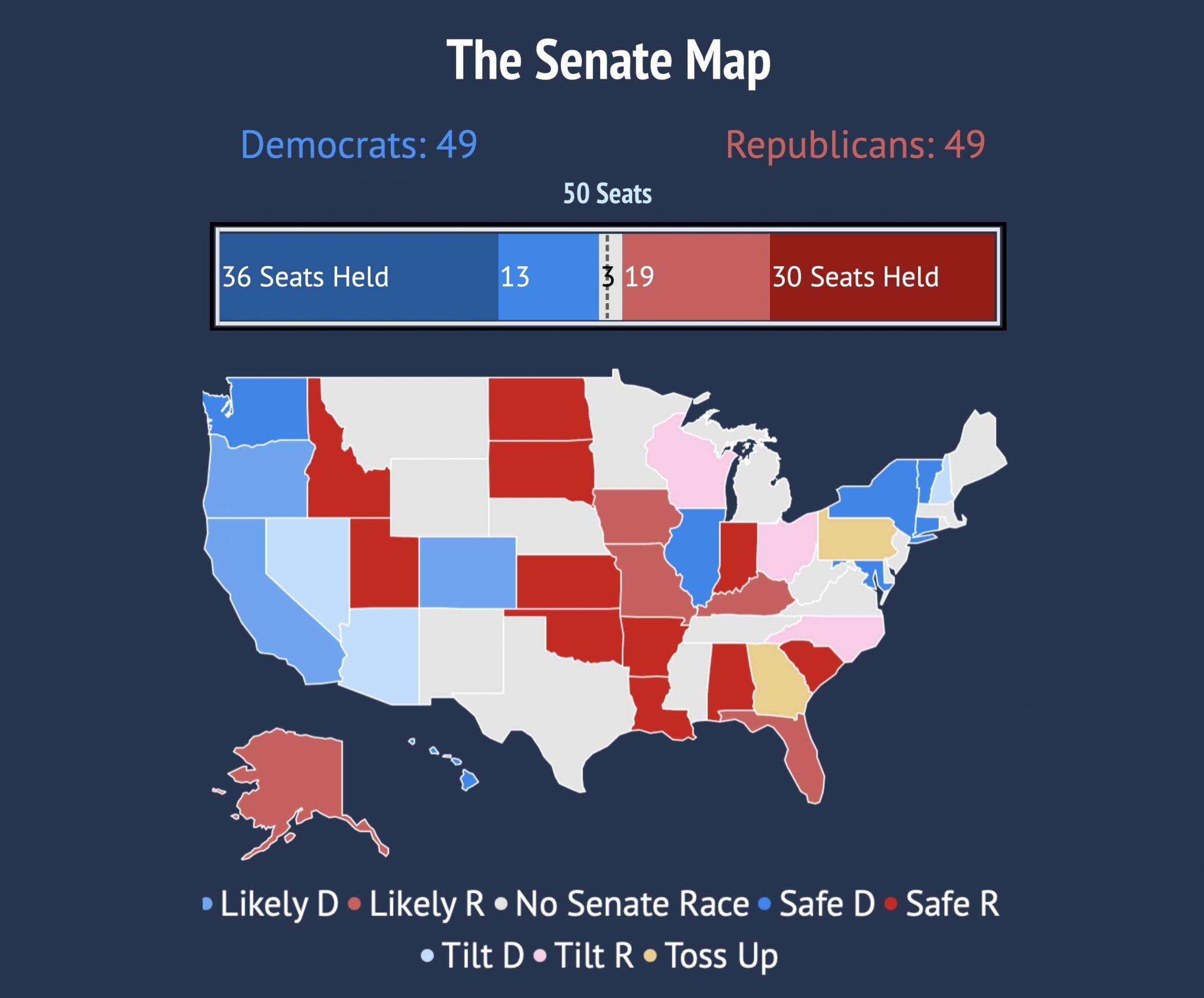 Today, Democrats control a razor-thin majority, holding fifty seats out of 100, with the tie being broken by Vice President Kamala Harris. In a little more than a year, 35 Senate seats will be up for grabs. Of those 35 seats, however, only 9 states are worth giving serious consideration. Out of those 9 states, two in particular, are likely to decide control of the Senate. Those 2 states are Georgia and Pennsylvania.

The most important storyline to watch will be whether Democrats can successfully fend off challenges in Arizona, Georgia, Nevada, and New Hampshire. To win the Senate, Republicans need to expand their ranks by a single seat.

Democrats just need to maintain the status quo though they would prefer to weaken the power of Joe Manchin and win a few seats. Democrats’ chances of victory will expand considerably if they can pick off one of the three seats left open by retiring Republican Senators in Pennsylvania, North Carolina, and Ohio. Ron Johnson and Marco Rubio are favored to win re-election in Wisconsin and Florida, but their victory is far from secure.

States are categorized into 5 categories. The darker the blue or red on the map the less likely they are to flip.

For this article, I will only focus on 2 of these categories which are Tilt and Tossup. First, let’s look at the Tilt states.There are a total of 7 states that tilt either R or D.

All these states could potentially flip but at the moment at least that appears to be unlikely. The biggest factor is also who will be running against the incumbent. Both Ohio and North Carolina should be more competitive since they are open seats.

Georgia -Currently Raphael Warnock (Democratic Party) is the Senator from Georgia. He assumed office on January 20, 2021. His current term ends on January 3, 2023.

Warnock is running for re-election to the U.S. Senate to represent Georgia. He declared candidacy for the Democratic primary in 2022. The reason he is running so soon after his victory only a year ago is that he won a special election for the remainder of Johnny Isakson’s term. The race in 2022 will be for a full term.

Hershel Walker – although he has not announced, Former President Trump said a few weeks ago that former NFL player Herschel Walker told him he plans to make a run for the Senate next year.

“He told me he’s going to, and I think he will,” Trump said on the “Clay Travis & Buck Sexton Show” while discussing Walker running for a Georgia Senate seat.

“I had dinner with him a week ago. He’s a great guy. He’s a patriot. He’s a very loyal person,” Trump added.

If he ultimately jumps into the race, Walker would enter the Republican primary as the presumed front-runner given his broad name recognition and likely endorsement from Trump, who remains deeply influential among GOP voters nationwide but especially in Georgia.

Of the announced candidates so far you would have to give the edge to Gary Black since he has already won a statewide race.

Pennsylvania – On October 5, 2020, incumbent two-term Republican Senator Pat Toomey announced that he would not run for re-election to a third term and currently plans “to go back to the private sector” at the conclusion of his term.

It is far too early to tell who are the front runners but the Philadelphia Inquirer just published an excellent article with more details if you would like a detailed analysys.

Pennsylvania’s 2022 U.S. Senate race: Who’s in, who’s out and what comes next

I would love to hear your thoughts and especially your predictions in the comments so please take a minute and let us know what you think.

If you are interested in the Georgia Governor race please read