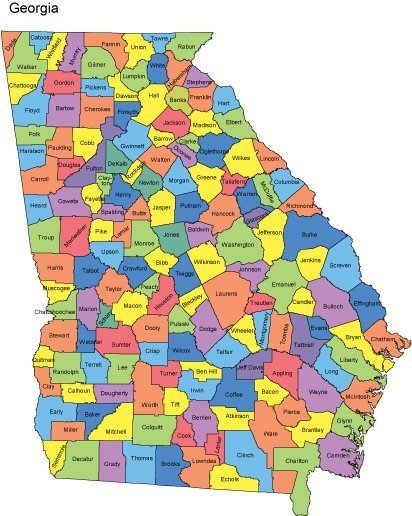 Why does Georgia have 159 counties?

This is a subject that has always intrigued me. Why is Georgia second only to Texas in the number of counties given that Texas has not only a larger population but is also just a much larger state in landmass. The history and reasons how Georgia reached the magic number of 159 is a long and complicated subject that was adeptly explained by fellow blogger Jim Cofer who wrote an amazing article explaining our complicated but also extremely interesting history as it relates to counties.

Did you know all of  Northeast Georgia used to be Cherokee county for example before the very tragic episode known as the trail of tears?  The Trail of Tears was essentially an ethnic cleansing that stole the last remaining Indian lands in Georgia from Native Americans and sent them west to Oklahoma. How many of you knew that Georgia also had an independent country known as Trans-Oconee Republic founded by Elijah Clarke the very same person of Athens-Clarke county fame.

If you are interested in learning more about why Georgia has so many counties this is a great resource to learn more. An Historical Overview on How Georgia settled on 159 Counties

Suffice it to say that the configuration of counties started with the founding of Georgia as a colony and the number of counties was fixed in 1945. State legislators settled on 159 as an absolute number and changed the state constitution. Peach is the newest county and was created in 1924 from parts of Houston and Macon counties.

At one point Georgia had as many as 161 counties. What happened between 1924 when Peach County was created and the constitutional convention of 1945? How did the state lose two counties? The Great Depression happened and two very rural and poor counties that bordered Fulton county called Milton and Campbell counties were absorbed by Fulton because one was nearly bankrupt and Campbell was bankrupt. That is why Fulton is such an odd shape and size today.

In an interesting twist, North Fulton county which used to be known as Milton now is trying to secede from Fulton now that they are the much wealthier part of the county. The benefactor that saved them nearly a century ago is apparently now county non grata. They will be in for a tough fight given the hard limit of 159 set by the Georgia constitution. Perhaps if they can bribe two other poor and rural counties to merge that would leave them an opening.

How Does Georgia Compare with other States?

Georgia is the 24th state in size with 159 counties. Alabama and Florida each have 67 counties, and South Carolina has only 46. Two of the country’s most populous states — California and New York — have only 58 and 62 counties, respectively. Alaska (the largest state in land size) has 13 counties and Montana (fourth-largest, following Texas and California) has 56 counties.

Some cite the reasons as the state’s civic-minded founders wanted all Georgians to live no more than a day’s horse ride away from their county courthouses.  Others argue the lines were originally drawn to make it possible for a farmer to travel by mule-drawn buggy to the county seat and be back home again by sunset in one day. Of course, if true, this explanation begs the question of why continue a system that is so outdated and so expensive?  This is all well and good when everyone relies on foot or horse to get to the county seat but not so good once the internal combustion engine was invented and we no longer had to ride on animals’ backs to get around. Much faster for us and I am sure the horses and mules are also happy about that development.

Having a Lot of Counties is Extremely Expensive and Hurts Growth

One hundred fifty-nine counties translates into a tremendously large number of government employees. With 159 county governments, you need 159 sheriffs, 159 clerks, 159 school superintendents 159 tax commissioners, 159 probate judges, and so on and so on. Every county has a courthouse, school system, and county government. Furthermore, some counties have a large population but small in area. Others may be large in area but have tiny and shrinking populations. This makes absolutely no sense, is extremely inefficient, and is extremely expensive.

Some examples to demonstrate the huge discrepancy between land and population:

Georgia has grown in population by the millions over the last few decades. We are currently 8th in the country with around 10.8  million people and have overtaken Michigan. Georgia will likely overtake Ohio by the next census.  But all that growth has been very unevenly distributed. Most has gone to certain areas most notably the Atlanta metro, along with second and third-tier cities like Gainesville, Warner Robins, Dalton, Athens-Clarke, Brunswick, Columbus, Savannah, and Augusta to name but a few. Many parts of the state have actually lost population.

Macon has been largely stagnant and has shown little growth thanks largely to inept leadership and a series of blunders and lost opportunities in the past. Luckily it now has a new Mayor who seems keenly aware of the problems and is trying his best to turn things around.  No doubt nepotism, corruption, Planning & Zoning with no long-term strategic plan, and just the inability of leaders to take advantage of the location and resources were certainly factors as well. Valdosta and Albany also are stagnant. Georgia had three cities among the 10 fastest shrinking cities in the U.S. in 2014. In the latest 2021 report, Albany is still on the list with a 6.9% drop. So the growth in Georgia has been extremely uneven which exacerbates the problem of having so many counties.

While some counties have grown others have shrunk in population and the people left behind are largely older. Young people have little choice but to abandon these rural counties since there are few to no jobs as industries closed.  So we are left with some counties that although large in square miles, have very few people, and other counties though small in square mileage are bursting at the seams with population growth.

Can Anything be Done?

If you agree that something should be done because of the expense of operating 159 counties with the required 159 offices of all the various government entities required there is a sliver of hope. Although modifying the state constitution is no easy feat it is also not locked in stone and impossible to accomplish. This is also a topic that should garner widespread bi-partisan support. If ever there was an issue that Democrats and Republicans can and should agree upon this is the one.

Just recently five counties merged with cities to form consolidated governments: Athens-Clarke County; Augusta-Richmond County; Columbus-Muscogee County; Cusseta-Chattahoochee County and Macon-Bibb County. The Republicans and Democrats might have different reasons for supporting a reduction in the number of counties but all should support this simply because it is the smart thing to do.

Georgia should realistically be able to cut the number of counties in half. A good goal might be around 75-80 counties or the most 100 like North Carolina.  There is simply no good justification to continue this ridiculous and outdated system. This would be beneficial to the counties themselves, the state government, and certainly the taxpayers that could potentially save tens of millions if not potentially hundreds of millions. At last count, there were over 500 municipalities in Georgia, which when combined with 159 counties, creates a total of almost 700 governments taxing Georgians. Poorer and depopulated counties could especially benefit by having access to much better resources from larger neighbors.

The Time has Come for Action

Although I am sure you can find some vested interest and naysayers who might risk losing their jobs if we went from 159 counties to 76, most people in the private and public sectors realize this would be a very good thing. There simply is no more reason for delaying something that could so greatly improve the lives and tax bills of Georgians. I call on Governor Brian Kemp and all other state representatives, state senators, mayors, and indeed all Georgia citizens to demand that we take steps to change the constitution to allow for more flexibility in counties. This is also an issue I wish Stacey Abrams would consider bringing up during her campaign to succeed Kemp. The Covid-19 crisis more than anything has demonstrated how unresponsive, confused,  and disorganized having so many chefs in the kitchen can be.

Politicians rarely act until it is too late and never act unless they hear from their constituents. If you agree that reducing the number of counties in Georgia is the smart thing to do please take 2 minutes from your day and contact your state Representative, Senator, Governor and share this post on social media. We can do this but I need your help to spread the word.