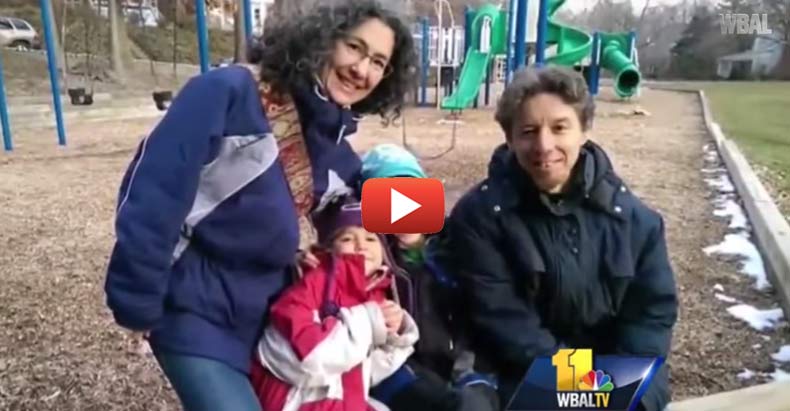 Silver Spring, Md. – Two Maryland parents have been found responsible, by Child Protective Services (CPS), of “unsubstantiated child neglect.” for allowing their 10-year-old boy and 6-year-old girl to walk a mile home, from a local playground to the family residence.

Their crime? They allowed their 10-year-old boy and 6-year-old girl to walk a mile home, from a local playground to the family residence.

The issues began when an anonymous caller phoned police on the afternoon of December 20 to report seeing the children walking home alone on in Silver Springs, Maryland.

Police picked the children up as they were walking home and brought them home in a police cruiser. The officer told the father Alexander Meitiv, a physicist for the National Health Institute, that the children were found walking the streets “unsupervised.”

This of course came as no surprise to Meitiv, as it was under his guidance that his children had earned the responsibility of on occasion being allowed to walk home from the park at a specified time.

The parents said that they gradually let the pair take walks on their own and that their children knew the area, which is along busy Georgia Avenue.

Being the stellar authority on parenting that he was, the officer didn’t think this was acceptable. Within a few hours a CPS officer was at the home threatening to take the kids away if Meitiv didn’t sign a form acknowledging that he wouldn’t leave the children unsupervised until CPS had a chance to review the case and make a determination.

The Meitivs’ said that if they didn’t feel as if the children were able to handle the walk they would never have allowed it and that it was a responsible decision made intelligently and consciously.

Then in February they received a letter telling them that the investigation had been completed and announced a finding of unsubstantiated child neglect.

“We got this form letter last week that said in nice big capital letters, ‘You have been found responsible for unsubstantiated child neglect,’” Meitiv told the Guardian by telephone. “As a parent you try so hard to do what’s best for your kid, you put so much energy and emotion into raising them, only to have a government agency come in with a silver pen and judge you for negligence.”

Paula Tolson, spokeswoman for the Maryland Department of Human Resources, said as a general practice, CPS officials in Maryland reach one of three possible findings after neglect investigations: ruled out, unsubstantiated or indicated, according to the Washington Post.

Unsubstantiated findings usually are made when CPS believes that there is information that supports a child neglect conclusion, if there are credible conflicting reports, or when there isn’t sufficient information to make a more definitive determination.

The CPS decision was based on an interpretation of a law regarding the supervision of children, which says that children under the age of eight cannot be left home alone.

The “unsubstantiated child neglect” charge means that the case will remain in the state’s database for five years if no further reports are added to the file.

“I don’t want there to be a file. We never should have been on their radar in the first place. We shouldn’t be in their system at all and certainly not with some allegation of neglect, whether substantiated or not,” said Danielle Meitiv, a writer and science consultant.

The Meitivs intend on appealing the charge in hopes of getting it expunged. However in what sounds like a retaliatory move, Sandra Barnes, Assistant Attorney General in the Maryland Department of Human Resources claims that such a move may lead to the charge being escalated to an “indicated” child neglect case.

The Meitivs believe in a parenting style labeled as the free-range kids movement. They believe that giving children independence rather than helicopter parenting is a much healthier way to raise responsible children.

“This isn’t some crazy, newfangled movement – this is how parents have raised children for generations,” Danielle Meitiv said.

The movement started when Lenore Skenazy, in 2008, after she wrote a newspaper column about allowing her 9-year-old son to ride the subway, which sparked major controversy.

“There really is a deep but misguided belief that our children are in real danger,” Skenazy said.

This point is highlighted by the fact that the Polly Klaas Foundation, a child safety non-profit, claims the number of children taken by total strangers is roughly only 100 per year. The vast majority of abductions are perpetrated by someone known to the child or family members in custody disputes.

“This country has become a land of snitches, where anybody who sees a child doing anything they think might a little bit dangerous turns in their neighbor,” Skenazy said. “They think they’re being a good samaritan.”

The Meitivs say that they will not change their behavior, as it is the healthy choice for their children. The government has no right to treat parents exercising their well thought out parental judgment as suspects that need to prove they aren’t doing anything wrong.

The true tragedy is the scores of children needlessly taken from loving and capable parents, only to have those children end up stuck in a cyclical system of abuse. All too often these children are victimized, or even killed, while in “the system.”