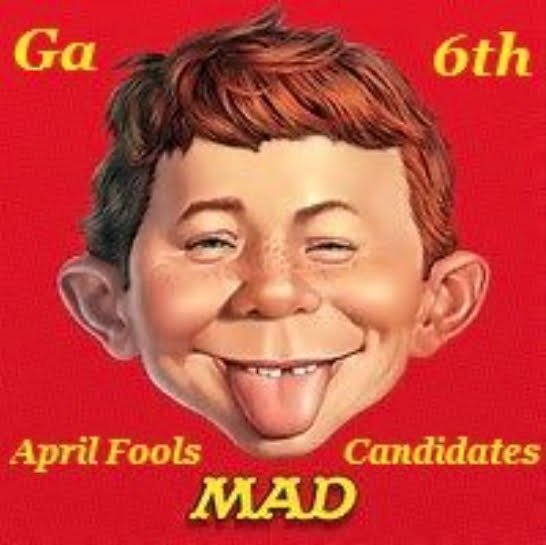 It is good that Georgia’s 6th district voters have 18 choices in the upcoming April 18th Congressional Election because several of the 11 Republican candidates have flawed histories of flip flops, support for outrageous legislation or worse, particularly the experienced ones. Consider the well documented track record of these candidates who claim to represent the people but gave us April Fools surprises instead.

When Karen Handel ran for Secretary of State in 2006 she published a “Basics” report that explained the flaws in Georgia’s unverifiable voting equipment but she reversed her position after getting elected. That is because she was taking $25,000 in campaign contributions from friends and family members of the voting machine vendor lobbyist. Don’t believe any of that? Here is an in-depth report from a former supporter including the public record of her campaign contributions.

In addition, while she was Secretary of State, Karen Handel created a new Inspector General position and staffed it with Shawn LaGrua who conducted politicized investigations that nearly destroyed innocent individuals. Some of her horrible investigations were eventually the subject of a 70 count impeachment resolution that was filed in the House. Don’t believe that either? Here is the 2010 HR1714 impeachment resolution.

On February 28, 2017, Judson Hill voted for the Senate Version of SB183 that proposed to legalize permanent toll roads in Georgia, remove the competitive bid requirement for toll roads and allow the toll road authority to extend credit to any private organization or individual even if the individual had nothing more than a DBA account for roadwork. Is that hard to believe? Read lines 61-70 and 107-109 of the original bill that he voted for.

In 2005, Dan Moody introduced SB5 that allowed private developers to use eminent domain to take away property from Georgia citizens even if their purpose had nothing to with roads and utilities. The private plans could be secretly reviewed by government officials, a decision could be made without a competitive bid process and ownership of the property could be transferred from victimized Georgia citizens to well-connected developers. Don’t believe that? Here is an analysis of the legislation and the actual bill that was ridiculed so badly Moody’s only co-sponsor Don Balfour withdrew from it.

The first time Mr. Llop ran for the 11 District Congressional Seat he participated in a Cherokee County debate on July 15, 2012 at the Bluffs where he adamantly advocated for the progressive income tax system and higher federal taxes because “the more you pay the more you can contribute to society”. His signs now claim that he is for lower taxes and fairer wages. Those wages have been suppressed because of high corporate taxation policies he supported. Why would any knowledgeable person believe anything he says? See and hear him in his own words at 1:13 of this 2012 video:

While some of these establishment candidates tout experience, their track records show that it is bad experience that favors elite lobbyists and influence peddling. Will voters in this Republican leaning district hold their nose and vote for anyone with an “R” behind their name? Regardless of whether you may be Republican, Democrat or Independent, don’t voters deserve better than the April Fools surprises that these candidates have already given us to subvert the will of the voters?