Dear Allen Peake, Who are those Many Critics of Whom You Speak? 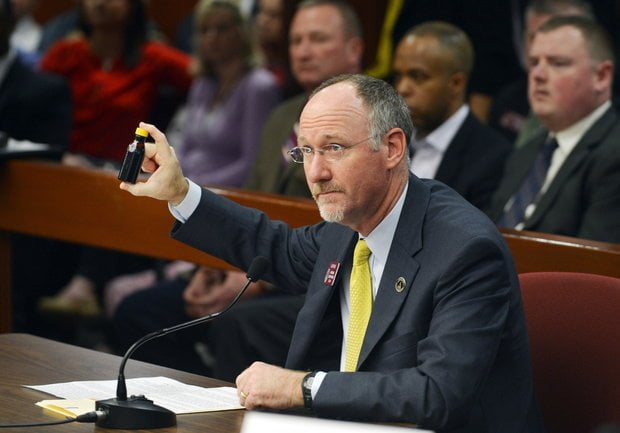 My Dad would often use the collective “They” when having a debate with my Mom. He would say “They said…” to which my Mom very astutely would reply, who exactly is this “They” of whom you speak? She didn’t stop there, she would also say she wanted to meet them so she could see if “THEY” had any credibility before “WE” give any stock to “THEIR” opinion. She would stress those words in parentheses. Needless to say she won most of those  debates when the best my Dad could come up with was “they” and not produce any actual names of these invisible expert witnesses.

Of course we all do that on occasion and it is a common tactic to give our own opinion more credence by creating allies out of thin air. Usually it just refers to an old memory of something you may have heard on TV or from people you speak with. In the course of debates humans will often call in backup by using “they” when in reality they are just restating their own opinions. “They” are not an expert and as Judge Judy would remind us, hearsay is inadmissible and with good reason. You can’t cross-examine a nameless and faceless THEY.

It appears Allen Peake is using the same tautological shortcut that my Dad used to employ in debates with my Mom. Although I loved my Dad very much and still miss him, he had to do better than offer some mythical group of invisible experts to win an argument with my Mom. Allen Peake likewise has to do a better job when speaking of these mysterious and nebulous groups opposed to medical marijuana but instead of “they” he calls them “Many Critics“. Either name them or stop using the phrase “Many Critics”. Because I don’t think they are quite as numerous as you are trying to suggest.

How exactly are we supposed to help you or fight these “Many Critics” if you refuse to even tell us who they are? We already know, but we need you to tell us you know as well and want to fight them and not cave to their demands. That starts with naming names.

They aren’t numerous but they are powerful. They include Nathan Deal, Casey Cagle, Sheldon Adelson, Pharmaceutical Lobbyists, Private Prison Lobbyists, Georgia Sheriff’s, Georgia Prosecutors, Religious Fundamentalists, along with Drug dealers and drug cartels who are definitely opposed to marijuana ever being legalized. If you would call them a small but powerful group of critics instead of “many critics”  that I could at least buy as believable.

I will paste an example below from his letter to the Macon Telegraph today.

Many critics have warned about the potential abuse from passing this law. And sure, there is the possibility of that happening with any bill we pass, but I would counter that by saying individuals who wish to abuse marijuana are not going to travel to another state and risk arrest by violating federal law by bringing low THC oil back to Georgia.

Dear Allen Peake, Who are those Many Critics of Whom You Speak?  84% or so of Georgians support medical marijuana. That means that only around 16% of Georgia is opposed. It seems to me that 84 is a much bigger number than 16. Why don’t you ever say the vast majority of Georgians support medical marijuana instead of focusing on the minority of malcontents who will never be swayed. Why do you continue to give their minority opinion more gravitas than it deserves?

There are a hell of a lot more supporters for medical marijuana than opponents against. There is no reason for you to kowtow to a small fringe minority of loons and lobbyists. Stay the course and start speaking to the 84% and not the 16%. I hope I never hear you utter any phrase ever again that contains the words “many critics” when speaking about medical marijuana because it is factually incorrect.

P.S. Mr. Peake, this is how you deal with the sixteen percenters. You don’t get on your knees and bow and scrape. You point out their hypocrisy and bash them with facts and remind them of the polls and especially of the lives this bill will save. Not so long ago you were part of that fringe so make them visit with the sick people it will help. That converted you to reason and may work with a few of them as well.

These people aren’t interested in compromise so stop trying. Fight for the sick from a position of strength not weakness and you will have a better chance to win. But keep giving them more power than they deserve and you will lose.

There aren’t “many critics” but there sure as hell are a lot of real supporters. Please start addressing us instead of the fringe. Out of the 19 conditions let them remove no more than two which is more than they deserve.

The critics are rich, powerful, connected, and include both the Governor and Lieutenant Governor. But the one thing they are not is numerous. Our biggest strength is our numbers. Keep reminding these critics that they are but a tiny minority and don’t diminish our side by inflating theirs. You weaken your position when you pump their numbers. Call them something more accurately descriptive like “A Small Minority.”

One thought on “Dear Allen Peake, Who are those Many Critics of Whom You Speak?”