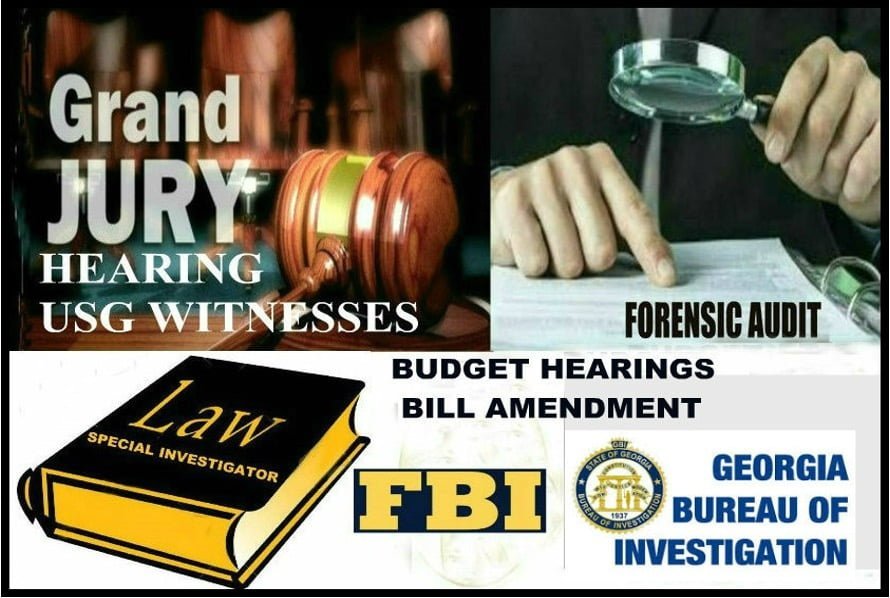 The Constitution of the State of Georgia, Article VIII. Education; Section IV. Board of Regents, gives the Board of Regents of the University System of Georgia (USG) EXCLUSIVE AUTHORITY to do what they want with BILLIONS OF ANNUAL HIGHER EDUCATION ALLOCATIONS of State Taxes and Federal Grants with NO FISCAL ACCOUNTABILITY TO THE  LEGISLATURE.

GOVERNOR KEMP EXEMPTED THE BOARD OF REGENTS OF UNIVERSITY SYSTEM OF GEORGIA TO MANDATORY BUDGET HEARINGS BY SPEAKER RALSTON IN SEPTEMBER 2019;

GOVERNOR KEMP FAILED TO RESPOND TO SIX REQUESTS TO APPOINT A SPECIAL INVESTIGATOR ALLOWED BY O.C.G.A. 45-15-18 TO CRIMES NOT INVESTIGATED BY TWO ATTORNEY GENERALS (OLENS AND CARR).

All Six Requests to appoint a Special Investigator were sent to Governor Kemp by Athens Attorney Stephen Humphreys.

★ NO RESPONSE FROM GOVERNOR KEMP TO ALL SIX REQUESTS:

Attorney General Chris Carr keeps much evidence in one USG Whistleblower case SEALED and is viewable on YouTube LYING to the public stating the evidence is “NOT SEALED.”

The Board of Regents of the USG recently froze tuition hikes, but failed to mention this is The Regents media “crumb” to avoid the fact “GEORGIA 4-YEAR UNIVERSITY TUITIONS JUMPED 88.7% OVER 15 YEARS!” ■ THE CENTER SQUARE 1 December 2019

Global Watchdog By Alan Wood   August 23, 2015 The Board of Regents of the University System of Georgia a.k.a. “The Untouchables”

are struggling to afford college because Professor  Bourdeaux is paid more than $3350 per hour spent teaching.”

He was one of three university staffers to be paid more than $1 million in fiscal 2020, which ended June 30, just after state lawmakers cut state spending 10% in the midst of the COVID-19 pandemic.

For nine years after he retired as the chancellor of the University System of Georgia, Stephen Portch remained on the state’s payroll, collecting $823,000 as an adviser and consultant…   By James Salzer  May 26, 2011

Georgia’s public universities could see overall state funding increase next year, despite guidance from Gov. Brian Kemp to trim budgets this year and next.   https://apnews.com/article/9a57a29474394389b9185e071ef7aeac

Some of Georgia’s top education officials continue drawing 6 figure salaries after they retire, despite deep cuts to higher education

UGA President Michael Adams to receive $2.7 million over five years after retirement  By A.J. Archer May 11, 2012

By Johnny Edwards and Ty Tagami – The Atlanta Journal-Constitution

For years, high-ranking Georgia Tech officials earning six-figure salaries used their positions to line their pockets, internal investigations have found. “There have been way too many cases of universities sweeping things under the rug.”

Dean Alford has been ordered to pay nearly $10.8 million after

about 100 investors say he ran a Ponzi scheme that defrauded them.

A source at a top office at The Board of Regents informed USG Whistleblower/Witness #1, Elizabeth Denise Caldon Sorkness, the Regents have an alleged “90/60” non-disclosed to the public policy which continues to pay USG presidents and officials for years after their retirements as “consultants” or part-time faculty at “90% of their former administrative salary for the first two years and 60%, thereafter;” i.e.:  See: http://www.open.georgia.gov/sta/advance.aud

★ When USG Whistleblower/Witness #1, Elizabeth Denise Caldon Sorkness, was asked by a faculty member to ask President David Bell about the rumor on campus he was also receiving a $400,000 deferred compensation check when he retired, President Bell responded to Denise:   “It’s none of their business.”

Four USG Witnesses met with Senator Lindsey Tippins, Chairman of the Senate Higher Education Committee, in February 2019 at his office in the Capitol.

This USG Witness remains confidential until investigation.Attorney General Chris Carr is viewable on YouTube stating the evidence in a USG Whistleblower case is “NOT SEALED,” when, in fact, it is.

“The statements by Mr. Carr were not made in the course of his job.”

FACT: Carr made statements at a Campaign forum for his job as  Attorney General

With the fact Georgia Attorney General Chris Carr keeps evidence SEALED and is on YouTube lying to this fact, the State Bar Approving Rule Allowing Disbarment for Prosecutors who hide evidence should also apply to Attorneys (i.e., Attorney General Carr) when they “hide evidence” for their Defendants. *See pgs. 9-10

The State Bar’s Board of Governors approved a revision of Rule 3.8 that would allow prosecutors who withhold evidence to be disbarred; the Georgia Supreme Court will have the final say.

The Prosecuting Attorneys’ Council of Georgia and DeKalb County District Attorney Sherry Boston have teamed up to revise and strengthen the state’s rules governing prosecutorial misconduct.

Under proposed revisions to the Rules of Professional Conduct approved by the State Bar of Georgia’s Board of Governors, prosecutors found to have failed to disclose potentially exculpatory evidence to a defendant can face sanctions up to and including disbarment; the current maximum penalty under Rule 3.8 is a public reprimand.

★ Regent Poitevint stated in her Deposition she did NOT even know she was the Co-Chair of the Regents’ Organization and Law Committee – appointed years earlier!

An Open Letter to the People of Georgia: Your Higher Education is in Crisis

Former employee: Board of Regents hiding records that show mismanagement

State’s college presidents in line for raises from 1.5 to 5 percent

By Janel Davis Education – The Atlanta Journal-Constitution May 15, 2016

AJC – The Atlanta Journal-Constitution/ Get Schooled

Are generous raises for Georgia college presidents defensible or necessary?  By Maureen Downey May 29, 2015

★ Former Governor Sonny Perdue – who is being considered to be appointed Chancellor – was fully informed about the fiscal malfeasance by the Regents.  Perdue responded in 2009 with an email stating:

From: STATE OF GEORGIA

Thank you for taking the time to make me aware of your thoughts about the University System of Georgia.

I understand your concerns about what you perceive to be unnecessary expenditures in these difficult budget times.

I must tell you, however, that Georgia’s Constitution reserves to the Board of Regents the exclusive authority to make such decisions.  See Ga. Const. Art. 8, Sec. 3, Para. 1(c).  For that reason, I encourage you to share your concerns with the Board of Regents…..

GOVERNOR KEMP’S FACEBOOK SITE REPORTED LINKS POSTED ON 26 MAY 2021 AND 4 JUNE 2021 BY USG WHISTLEBLOWER/WITNESS #1 RE MEETING REQUEST AND POWER POINT – USG WITNESS #1 WARNED IF SHE POSTED AGAIN SHE WOULD BE “RESTRICTED.”

★ BOARD OF REGENTS USG CORRUPTION SORKNESS/HUMPHREYS

*invited to share with Congress in D.C. in February 2017