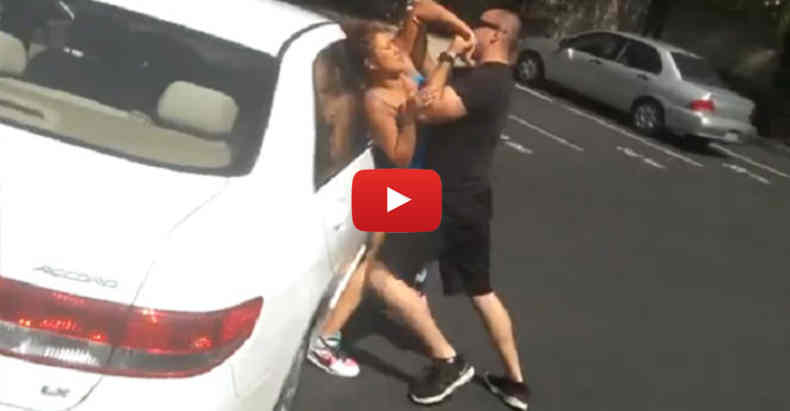 San Jose, CA — An altercation between a man and two women in a San Jose parking lot sparks some serious questions about an off-duty cop’s behavior.

The video, which was originally uploaded to Liveleak, shows a man in a physical altercation with two women, one of whom allegedly rear-ended his vehicle.

According to the post in LiveLeak, the man filming said he heard a commotion and saw that a man claiming to be an off-duty cop was following a car full of girls and tried to detain one of them.

According to the poster, the off-duty officer never showed his badge. He went on to say that “San Jose police are notorious for this type of behavior.”

The video obviously starts after the original incident occurred so it would be irresponsible to make assumptions on what happened prior to this man trying to detain a woman.

What we do actually see in this video though, is a man, in plainclothes, who is claiming to be a police officer, attacking a woman who is trying to get away. Not until the woman is slammed into a car and running away does the man claim to show a badge.

Prior to the end of the video, we do not see a badge, a uniform, a patrol car, or anything else that tells this woman that this man who is applying violent force to her, is a cop. This means that the woman in the video was entirely justified in using whatever means necessary to free herself from this violent and dangerous confrontation, which she did.

However, the San Jose Police department obviously sees it a different way. Sergeant Heather Randol confirmed the events by stating that the woman in the video allegedly rear-ended the off-duty police officer and he followed her vehicle and tried to detain her until local, uniformed police arrived.

But then he does something that is completely unique to police, which is claiming to be assaulted after they initiated the force.

“During the altercation the female suspect assaulted the officer (bit him). She eventually ran to her car and drove away (as seen on the video),” said Randol.

Do you see what Sergeant Randol did there? The woman, who was followed and assaulted by a man only claiming to be a cop, “assaulted the officer” by trying to get away from a man who could have been a crazed lunatic trying to kill her.

It is highly unlikely that this woman walked up, unprovoked, to the off-duty officer and ‘bit him.’

Naturally the San Jose police department has issued misdemeanor warrants for the women in the video for “hit and run” and using force against the officer.

It seems that even off duty police are allowed to indiscriminately initiate force with total impunity.