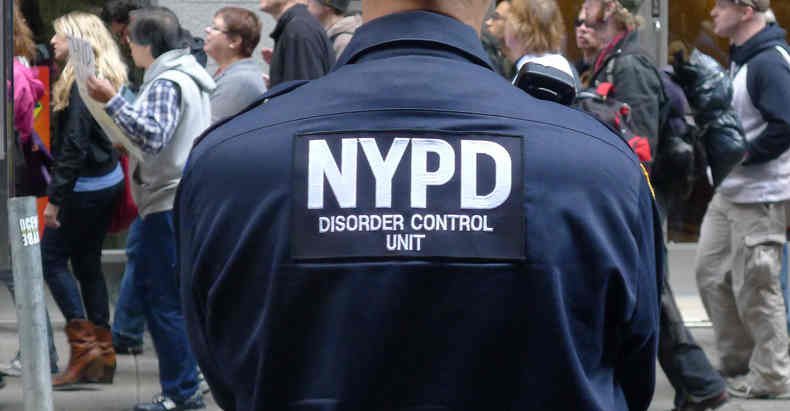 “It’s not a slowdown — it’s a virtual work stoppage.”

New York, NY — The NYPD has basically stopped doing its job since the murder of officers Rafael Ramos and Wenjian Liu earlier this month, according to reports in the New York Post and New York Daily News, and yet the city hasn’t descended into total chaos.

The Post reported that arrests were down 66% in the week following the deaths of officers Rafael Ramos and Wenjian Liu, compared to the same period in 2013.

For certain offenses, the arrest levels are staggeringly low, according to the numbers put out by the Post.

Summonses for low-level offenses like public drinking and urination also plunged 94 percent — from 4,831 to 300.

Drug arrests by cops assigned to the NYPD’s Organized Crime Control Bureau — which are part of the overall number — dropped by 84 percent, from 382 to 63.

It’s not a slowdown — it’s a virtual work stoppage, reported the Post yesterday.

The Post says these numbers were obtained hours after revealing that cops were turning a blind eye to some minor crimes and making arrests only “when they have to” since the execution-style shootings of Ramos and Liu.

Some of the reason for the drop off in police activity is that there are some safety concerns. However, one of the Post‘s sources says that yes it’s partly out of safety concerns and partly a continuation of the childish and embarrassing protest against Mayor de Blasio’s response to the non-indictment of Daniel Pantaleo, the officer who killed Eric Garner last summer.

“The call last week from the PBA is what started it, but this has been simmering for a long time,” one source said.

“This is not a slowdown for slowdown’s sake. Cops are concerned, after the reaction from City Hall on the Garner case, about de Blasio not backing them.”

A recently retired cop who attended the funeral also noted that police from around the country joined in the stunning display of resentment toward de Blasio.

“It’s a national protest against the mayor of New York,” the ex-cop said.

After the police union blamed the mayor for the subsequent murder of two officers, the New York Times made the case that rank-and-file officers deserve better from their union reps.

“Mr. de Blasio isn’t going to say it, but somebody has to: With these acts of passive-aggressive contempt and self-pity, many New York police officers, led by their union, are squandering the department’s credibility, defacing its reputation, shredding its hard-earned respect,” it says in an editorial. “They have taken the most grave and solemn of civic moments—a funeral of a fallen colleague—and hijacked it for their own petty look-at-us gesture.”

“I think it’s probably a rift that is going to go on for a while longer,” Police Commissioner Bill Bratton said as he predicted a long, cold war between Mayor Bill de Blasio and the NYPD’s rank and file Sunday, while admitting that morale among cops was so low, the problem could no longer be denied.

The time for petty threats and antagonism is over. It is now time we talk solutions.

Mayor de Blasio is to meet face-to-face with the heads of five police unions today. If there is one thing that we can rest assured will not be brought up at this meeting, it is that this sharp drop in the enforcement of certain offenses has not created the Mad Max scenario that so many people predict would happen if police loosen their grip.

Drug offenses, parking violations, traffic citations; these are not so much crimes as they are streams of revenue for the city. They are also the reason for the majority of police harassment within certain communities.

Without the war on drugs and without police shaking down every young person who they suspect is carrying an illegal plant, the quality of life for so many people would instantly increase, as it likely already has.

Ending prohibition would also effectively and drastically reduce the amount of crime in communities derived from the black market sale of drugs and the gang-related monopolies which arise from making certain substances illegal.

These are real solutions to real problems and we have an opportunity now to show how many of these laws are based in irrational fear or simply designed for revenue generation.

Sure, if police start refusing to arrest murderers and rapists, things will probably get really bad, especially since most of the residents in New York City have been disarmed. But this lawlessness would likely be a temporary reality. As we’ve seen with the economic collapse in Detroit and the subsequent lack of government policing, solutions like the Threat Management Center arise, which provide a more efficient and much more peaceful means of societal security.

As Reason Magazine’s Scott Shackford said, presumably, next year, after this all dies down, the NYPD may note a big drop of crime in December entirely because they stopped finding reasons to charge people with crimes.

Police unions could use the experience to decry all the petty, unnecessary reasons they’re ordered to cite and arrest people in the first place, but that’s not going to happen because they love the drug war and the money that comes into the departments from fighting it.