Who will replace Johnny Isakon when he retires soon after election? 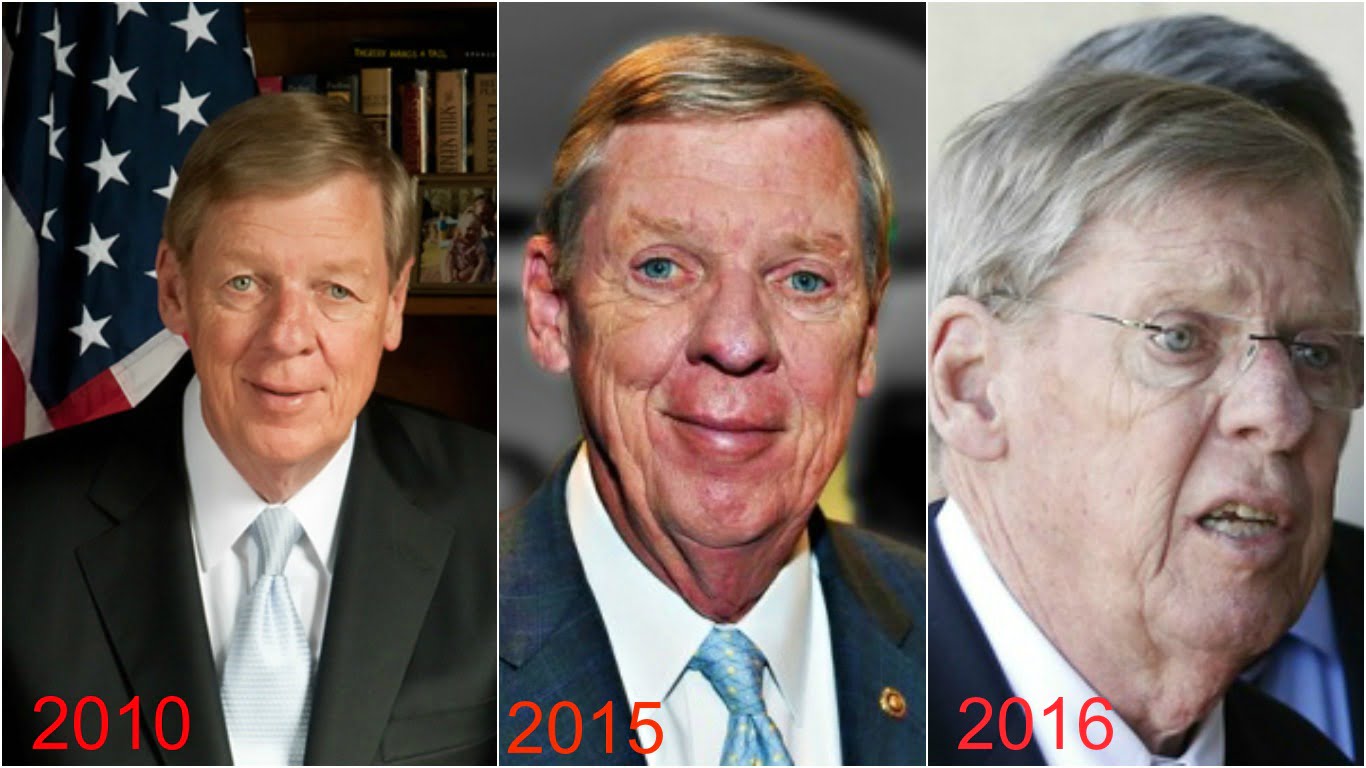 Johnny Isakson is way ahead in the polls and will almost certainly be re-elected shortly.  He was first elected to the House in 1999 to replace former Speaker Newt Gingrich (R-Ga.). He has been a solid Republican lemming that would follow them over the cliff as evidenced by his support for Donald Trump.

He is already 70 years old and announced his Parkinson diagnosis last year which is a progressive disease. He was diagnosed in August of 2013 though likely had the disease years earlier. If anyone thinks Isakson will serve his full six year Senate term they are delusional. I wager that Isakson is only running for one simple reason. He is guaranteed to win and would then keep his seat safe allowing Governor Nathan Deal to pick his replacement not long after the election and almost certainly before Deal himself finishes his term in two years. Instead of retiring gracefully and taking care of his health and spending time with his family Johnny Isakson will instead allow Nathan Deal to foist a Senator on Georgia citizens who did not receive even one vote.

I don’t personally dislike Johnny Isakson though I feel he has been an abysmally bad Senator as I outlined in Should We Worry About Johnny Isakson’s Health.  His voting record on terrorism, gun violence, LGBT rights, equality for women in the workplace, and many other issues have been on the wrong side of history. But this isn’t really about his unimpressive Senatorial career, this is about the fact that Parkinson’s is a progressively degenerative disease that only gets worse over time. Six years is a very long time even if the 70 year old Isakson were in perfect health which he most certainly is not.

But who are the likely replacements when Isakson retires?

#1 Nathan Deal – You don’t need to look too far for the number one contender. Nathan Deal could easily appoint himself. Well, technically he would have to do a Jawja shuffle with some pretense of being selected by Casey Cagle because Deal would have to retire himself making Cagle the Governor who would then appoint Deal to the Senate seat. This would mean Cagle as an incumbent would almost be sure to win shortly afterwards. Deal likes power and the money that brings. He was flat broke when he was first elected but is now magically a millionaire a few years later.

#2 Casey Cagle – If Nathan Deal doesn’t want the job for himself then he most certainly will pick from his inner circle. After all he had no qualms about appointing his son’s lawyer to the ethics commission.  That lawyer also just happened to be the son of Deal’s longtime private attorney Randy Evans. No conflict of interest there. 😉

Rumors have it that Deal and Cagle have a symbiotic but rocky relationship. They both use the other for political maneuverings but don’t like each other very much on a personal level. But if Deal wants to move Cagle out of Georgia it might make sense to pick him as Senator and then be able to hand pick a Governor that will likely not investigate any of the shady deals (pardon the pun) old Nate has committed while in office. Copart anyone?

#3 David Ralston – The House speaker has been a loyal lieutenant to Nathan Deal. He is also from north Georgia and closely aligned with the Hall County mafia crowd that Deal trusts implicitly. He is also the one who pushed through the ridiculous amendment to disband the Judicial watchdog agency and replace it with political appointees . State Senator Josh McKoon is quoted as saying “We were told that the speaker had made it clear if we did not pass the JQC constitutional amendment that he would quote, “shut the building down,” meaning the House would not consider any Senate legislation.”

#4 Sam Olens – Yes I know that Olens just got offered a fat paycheck of $430,000 as the president of Kennesaw State University. But there is a lot of pushback and also now an injunction to stop his appointment. That lawsuit has legs because it is a clear violation of both Equal Opportunity and affirmative Action laws. You can’t appoint an unqualified political flunky to the third largest university in the state and never even consider any application from far more qualified applicants. Opens also has done a great deal to protect Deal and his cronies over the years by failing to investigate ethics charges so this would be a reward if he is not able able to take the helm at KSU.

#5 Jack Kingston This is a 20 year veteran of Congress who was defeated by David Perdue for Senate two years ago. Since that defeat Kingston is most noted for being a Donald Trump surrogate on news shows. Once Trump loses the election Kingston will be desperate to find a new gig. His name and reputation will be tarnished but his great desperation to get that appointment would mean he would owe Nathan Deal a lot of favors. Nathan Deal loves to choose people he can control or who owe him favors.

#6 Brian Kemp This is the current Secretary of State who had ambitions to be elected Governor in 2018. In the past year Kemp released 6.1 million social security numbers, allowed voters to vote in the wrong district, issued the wrong ballots in the primary election, and is also involved in numerous voter suppression and disenfranchisement cases. All these blunders may have so damaged him as a candidate that he is no longer the presumed front runner he once may have been. He has however been a loyal lemming to Nathan Deal and might be rewarded with a cushy Senate seat.

Who did I leave out? Please list your own names of potential replacements Nathan Deal might appoint to replace Johnny Isakson after he retires within a year or so of being re-elected in the comments section. Below is a video by Allen Buckley who is running as the Libertarian candidate against Isakson. In the video a man claims to have been told by an Isakson staffer it is well-known that Isakson plans to retire. My article is not based in any way from this video but rather common sense and logic but I thought it worth including.

One thought on “Who will replace Johnny Isakon when he retires soon after election?”