Everything Peachy in Georgia: If you live in Hall County that is.. 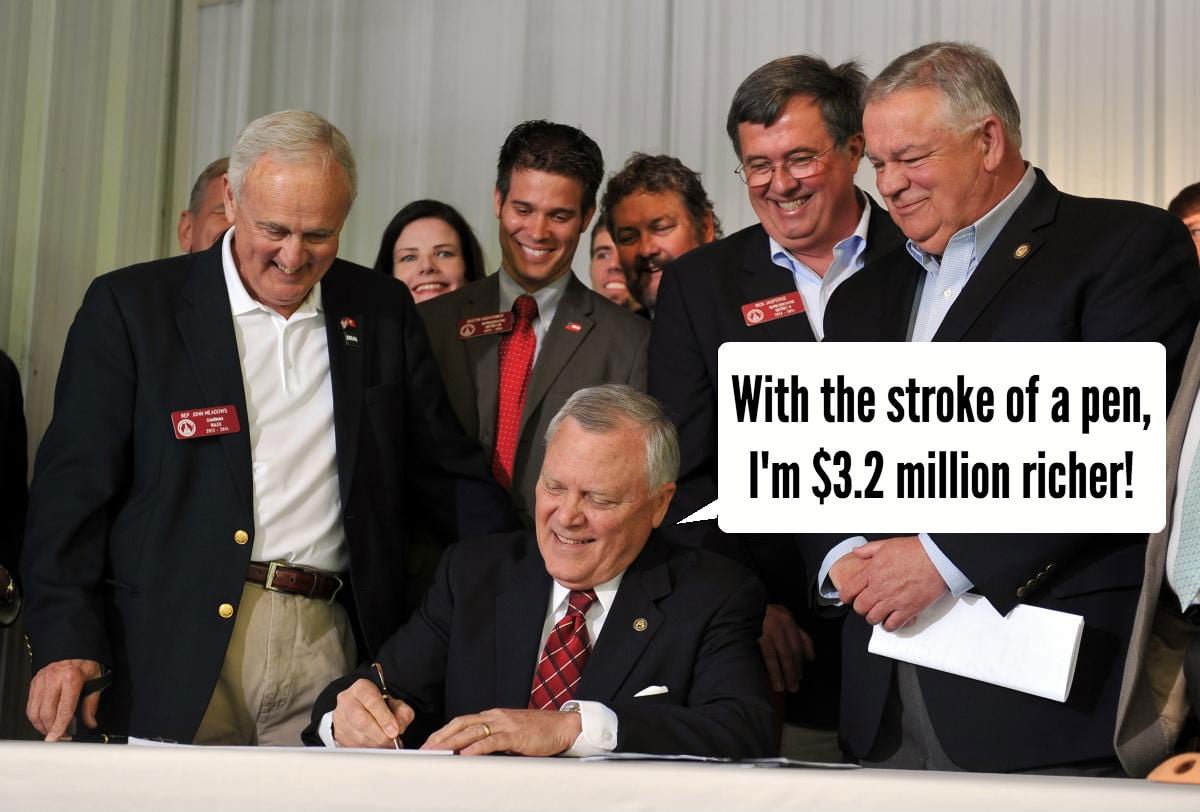 Hall County just happens to be the home of Nathan Deal. The largest city is Gainesville which is where Deal’s Salvage yard recently leased/sold to Copart is  located. I used the hybrid term since Copart will pay Deal $10,000 a month to “lease” the land even though they have already paid him millions. The  total amount Deal and his partner will receive from Copart is around $11.2 Million. That sure is nice of them. I wonder when they will find that $74 million in tax money they owe.

They have also been very generous to his re-election efforts and have given $100,000 to the Republican Governor Association responsible for many of the negative fliers you likely received in the mail or ads on TV.

To say that Deal has been good to Hall County is an understatement. Well at least if you happen to be a pal and big donator to Nathan like Phillip Wilheit. Owning land in Hall county also seems to have been very good for Nathan Deal and his entourage. Some have dubbed this collection of lucky fellows the “Hall County Mafia”. But unlike the real mob I don’t think they fear the Attorney General. It is apparently good to have an AG without any prosecutorial experience apparently with ambitions to a higher office.

Hall County is getting lots of love from native son Nathan Deal. It has among the lowest unemployment rates in the state already at 6.7% while Chatahoochee struggles with 17.6%.  Today James Salzer from the AJC reports Hall County is getting more love from Nathan. Deal announced Monday that Kubota, a leading manufacturer of small tractors, lawn mowers and recreational vehicles, would expand in his home county, bringing 650 good-paying jobs to 180 acres located in the Gateway Industrial Centre.

Kubota is expected to pay the local development authority about $5.67 million for the land, with the proceeds going to pay off Hall County for infrastructure improvements at the industrial park and to the past owners of the land. As The Atlanta Journal-Constitution reported in 2012, the partnership of owners that transferred the land to the authority includes Philip Wilheit, the governor’s campaign chairman. The CEO of the limited partnership involved was Jim Walters, a longtime supporter. A press release from the governor’s office said the state Department of Economic Development “assisted” Kubota, along with the local chamber of commerce.

Readers of this blog will recognize the name Phillip Wilheit. Deal already made him a member of the extremely powerful Board of regents which controls billions. Wilheit and his family and businesses have contributed about $89,000 to Deal’s gubernatorial campaigns, and Jim Walters, the CEO of the limited partnership, an additional $37,000. Some of these name also seem to be linked  with the Nursing Home #ScanDeal.

Andrew Hunt, the Libertarian candidate running against Deal noted that in 2012, the State Properties Commission, which Deal heads as chairman, decided to spend $690,000 on 10 acres in the same industrial park for a new State Poultry Lab site. Hall County officials agreed to front about $10 million in local taxpayer funds to improve the 500-acre industrial park property.

The same day the county voted to spend the money, Wilheit and his partners transferred the property to the local development authority with the idea that they would get paid as lots in the industrial park were sold. Wilheit has long served as a chairman of the development authority.

Hunt sent out a release Tuesday saying he wanted to “expose” the facts about the expansion site.

“I understand that Governor Deal has friends and family whom he would like to see succeed,” Hunt said. “The more that comes to light, the more I worry about our state under his leadership. “Government should not create jobs in the private sector because it causes great expense to everyday taxpayers. I would never invest millions of taxpayer dollars into my friends’ property, either direct or in such a manner that is in any way sketchy and nontransparent.”

Upon hearing about this news while campaigning in Athens, Jason Carter said :

“As I understand the facts, this is a typical Deal deal. You have got 15,000 fewer private-sector jobs (since Deal became governor). He is bragging and cutting the ribbon on 650 jobs because his biggest campaign contributor will be the biggest beneficiary of the deal.”

Although it is true Nathan Deal “helps” out people not from Hall County, move to the front of the line if  if you are old, rich and white and happen to live in Hall County.

One of the governor’s first acts after taking office in 2011 was to appoint Wilheit to the University System of Georgia’s Board of Regents, where he serves as chairman. His son was appointed to the Department of Natural Resources board, where he also serves as chairman. Walters was appointed to the Georgia Ports Authority board. Those three boards are among the most prestigious in state government, and the AJC found earlier this year that members of those three bodies contributed nearly $1.3 million to Deal’s campaign and political action committee.

Leebern Jr. should not still be a University System regent

One thought on “Everything Peachy in Georgia: If you live in Hall County that is..”