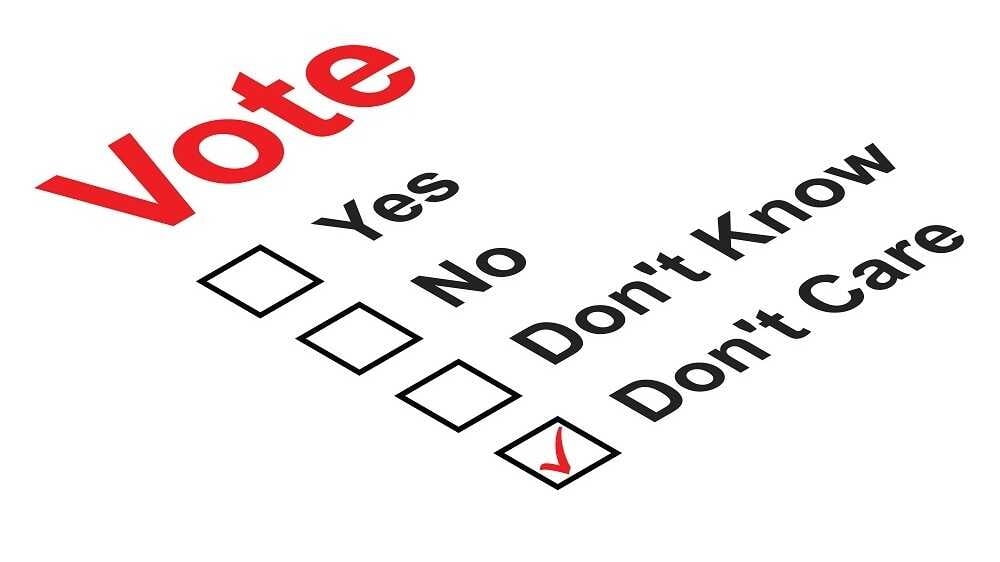 Voter apathy and low voter turnout isn’t necessarily a bad thing. Do we really need a large chunk of the electorate actually voting when they have no idea who or what they are even voting for?

Conventional wisdom indoctrinates us to believe voting is a civic duty and an essential responsibility as citizens. You have undoubtedly seen expensive ad campaigns with names like Get out the Vote and Rock the Vote with many famous celebrities encouraging us all to go to the polls. Some other campaigns have catchy names like souls to the polls which organize voting after church ends on Sundays.

The tactics used to get people to vote include: shame, fame, guilt, patriotism, civic pride and anything else they can think of to get people to the polls. But voter apathy has largely remained unchanged for decades. We were just as apathetic 50 years ago. The percentages are largely the same once you take into account that there are a lot more people over the age of 18 ineligible to vote than in 1972 for example.  Noncitizens and convicted felons are a much higher percentage of 2022 ‘Murica than the population in 1972. Once you remove those two cohorts, the percentages are roughly the same.

We could certainly increase voter turnout dramatically if we imposed monetary fines like some countries and require mandatory voting. However, we must remember that most countries unlike the U.S. only hold elections around once every 4 to 5 years at the most.  Americans are asked not only to vote far more frequently but for many more offices including dog catchers, coroners, and county clerks. We also have tons of runoffs before we even get to the actual election. Americans it seems have to vote not only yearly but many times in any given year. It leads to burnout.

It’s always between a douche and turd sandwich

Of course, given how gerrymandered and polarized the entire country has become, the primaries or runoffs in most districts will usually decide the ultimate winner in many elections. True reform would require making all districts competitive. There is little incentive for either party to push for competitive districts so this is a pipe dream.

Another possible reason for apathy is all the negative ads. Here in Georgia, you could not help to see a constant stream of negative ads featuring Brian Kemp, Stacey Abrams, Ralph Warnock, and Herschel Walker. Negative ads may increase voter turnout among the politically engaged to a very small degree, but for the larger population as a whole, negative ads simply reinforce negative stereotypes that people have about all politicians. Namely, that one is a turd and the other is a douche.

Now that is certainly true about many politicians but that is also true about any and all occupations outside of politics as well. Chances are whether you are a teacher, a factory worker, a doctor at a hospital, a claims rep at an insurance company, or any other job, you likely know a few turds and douches at work. Am I wrong?

Politicians are no different since they are us. Many politicians that choose to run are good and decent people that sincerely want to make a positive difference and many others are egomaniacal assholes simply addicted to power, influence, and money. I think the ones that become career politicians can become corrupted and jaded after 12 or more years, which is why I support term limits. But most politicians at least begin their service with noble intentions to serve their constituents to the best of their ability and do not run for the sole purpose of becoming corrupt assholes. Unfortuately, that is an inevitable byproduct of serving too long.

So get the point already…Why is low voter turnout a good thing?

I’m glad you asked. It boils down to something very simple. If you don’t care enough to vote, then there is a very large likelihood that you didn’t care enough to research the issues or candidates either. Do we really want more of these uninformed people, who for all intents and purposes are political zombies, just blindly pulling a lever when they have no idea who they are even voting for? Are these the people we want to choose our leaders when they don’t even know who they are voting for?

Perhaps others don’t vote because they are largely satisfied with the way things are going. There is nothing like anger and dissatisfaction to get people to the polls after all. People that are happy with the status quo simply do not feel the need to vote for change. When you try to increase turnout and bring in people without a strong interest in the business of government, you get random voting and that is not necessarily a good thing.

Moreover, if you want to be civic-minded, your duty isn’t to blindly fill in ballots just to fill in ballots. You shouldn’t do it from ignorance, out of emotion, or to win approval from your political friends. Your duty to vote should be to participate in a way that, at the very least, makes the outcome no worse and hopefully from an informed decision.

The ones least motivated to show up at the polls year in and year out also tend to be most poorly informed. Many vote against their own self-interest. They simply vote out of habit or obligation in many cases blindly voting all Republican or all Democrat when chances are if they knew the candidates and issues they would pick some candidates from both parties and possibly from third parties as well. So when turnout drops, it tends to leave the pool of remaining voters with an improved average level of political knowledge and policy know-how. So perhaps that paltry 35% of voters deciding elections were our crème de la crème. Maybe just maybe it’s a good thing people who had no idea who was even running let alone what they supported abstained.

My idea is something that will never happen in the United States but could solve pretty much all of our complaints in one fell swoop. When we go to the polls instead of having a choice of candidates, we are instead asked a series of questions on policy and issues. Perhaps it could be on a scale from strongly disagree to strongly agree like the question above about dogs or cats but instead ask about specific issues. The candidates could help formulate their key policy stances and approve the questions. Instead of voting for names, parties, looks, or personality, we could vote on the one thing that actually matters which is our answers to policy questions.  Yes, I realize this is a pipe dream. But I hope the next time someone brings up voter apathy, you politely let them know why that is not necessarily a bad thing.

My second choice would be to offer rank-choice voting in all 50 states. I think this is a brilliant compromise and could eliminate all these wasteful runoffs once and for good. Allow people to vote for their 1st, 2nd, and 3rd place choices and be done with it.

Are You a Republican, Democrat, Libertarian, or None of the above?

Here are a few polls that will attempt to guess your political identity by simply answering a few questions. Let me know in the comments how accurate they were. Most people fall near the center or slightly to the left or right of the center.  Until we get term limits, less politically drawn districts as opposed to geographic districting that make elections instead of primaries important again, a strong third party, campaign finance reform, and figure out a way to curtail influence from any and all outside lobbying groups nothing will change.

Mr. Gridlock has found a comfortable home in Washington D.C. and indeed all over the country and he has no intention of moving over for Mr. Compromise any time soon.