Debating Whether Thug is the new N-Word is Pointless 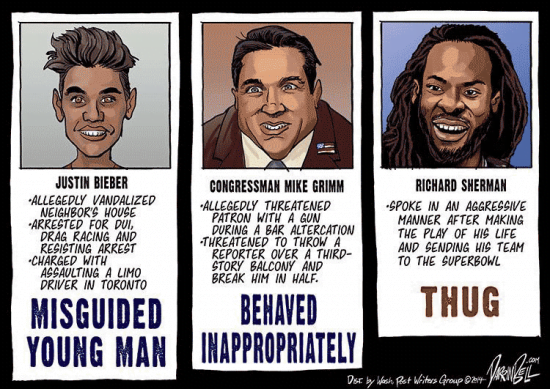 “What a sad era when it is easier to smash an atom than a prejudice.”
― Albert Einstein

This article certainly won’t be the first or the last to address the question of whether thug is being used as the new N-word.

Back in January of 2014 Seattle Seahawks player Richard Sherman was asked if “thug,” a word that was used often on message boards and social media to describe the Seahawks cornerback, bothers him more than any other term.

“The reason it bothers me is because it seems like it’s an accepted way of calling somebody the N-word now,” he said. “It’s like everybody else said the N-word and then they say ‘thug’ and that’s fine. It kind of takes me aback and it’s kind of disappointing because they know.

“What’s the definition of a thug? Really? Can a guy on a football field just talking to people [be a thug?] … There was a hockey game where they didn’t even play hockey! (Laughter from the media) They just threw the puck aside and started fighting. I saw that and said, ‘Ah, man, I’m the thug? What’s going on here?'” (More laughter from the media). So I’m really disappointed in being called a thug,” he said.

Later, Sherman explained that the term was especially troubling given that it’s something he’s endured his whole life.

“I know some ‘thugs,’ and they know I’m the furthest thing from a thug,” Sherman said. “I’ve fought that my whole life, just coming from where I’m coming from. Just because you hear Compton (Calif.), you hear Watts, you hear cities like that, you just think ‘thug, he’s a gangster, he’s this, that, and the other,’ and then you hear Stanford, and they’re like, ‘oh man, that doesn’t even make sense, that’s an oxymoron.”

The debate had been going on long before Sherman gave the interview and it has become especially heated recently after the Baltimore riots and Charleston massacre with debates about the removal of the Confederate flag. Racial tensions are extremely high at the moment and we all need to see what we can do to calm things down.

My personal feelings, as I have stated in past articles, is I do not view the Confederate flag as a racist symbol when I see it but I also understand why many do. Hate groups like the KKK, Neo-Nazis and others use it for their hate filled speech.  For that reason I do not think it should be flown over government property. If you want to fly it in your yard or on your vehicle that is your right, but not on government property which gives the pretense of government support or sanction which I believe sends a bad message to people who view it as a symbol of hate.

I feel historical monuments likes statues and plaques are completely different however. We must be careful to separate learning from history and honoring dead soldiers from the Confederate battle flag. Statues are not flags and must be treated entirely different. Even in Germany you see statues and monuments honoring their fallen soldiers from WW II,  but you won’t see any Nazi flags flying. The Germans understand the distinction and so should we.

President Obama controversially used the word thug to describe rioters and looters in Baltimore. So did the city’s mayor, Stephanie Rawlings-Blake, and Maryland Gov. Larry Hogan. The rioters most certainly were technically thugs because of their actions, but this reignited the debate about it being a racially charged word aimed almost exclusively at young black males.

The dictionary defines thug as: (1) a violent person, esp. a criminal. (2) Historical: a member of a religious organization of robbers and assassins in India. Devotees of the goddess Kali, the Thugs waylaid and strangled their victims, usually travelers, in a ritually prescribed manner. They were suppressed by the British in the 1830s. Here is a clip from a movie that you may remember showing an actual “thug” based on the historical meaning of the word.

I think it is really pointless though to debate the semantics or etymology of the word “thug”. It is not a word I have used very often for people of any race for the simple fact that it is so broad and non-descriptive. I try and be far more precise in the words I choose. Thug is too generic and has almost no real descriptive meaning. It is a word for the cognitively lazy people in my opinion.

Debating whether thug is the new N-Word is pointless for the simple reason that if it falls out of favor, a new word will come along to take the place. Instead, we need to look at the heart of the person using these words.

Before thug became popular words like hood, ghetto, hoodlum and several more were used to the same effect.  When somebody talks about thugs ruining a place, it is almost impossible that they are referring to somebody with blond hair at least from my observations on articles. As an example I posted an article just a few days ago about a young white guy with a gun that hit his mother in the face and was arrested with methamphetamine and a gun and not one single comment to date. But the articles about the ransacking of a Walmart received a torrent of comments as did almost any other article featuring young black males. This happens all the time on articles but why?

How can we look at a person’s heart or peek into the inner soul of a stranger online to see if they are racist? Well, we can’t so stop trying! Now some are so blatantly racist and obvious there is no question about their intentions, so I am not talking about those folks. They freely admit they are racist so there is no hope for them.

I am talking about other people who like to skirt the lines and get offended if they are called racists. Many of these people honestly don’t think of themselves as racists at all and are shocked and offended when called one and many of these people might not be racists at all and perhaps just chose their words poorly or perhaps were attacked by a hypersensitive agitator. So be careful not to jump on people unless their comments leave no doubt as to their intentions.

This article is not a way for you to judge or determine if someone else is using the word “thug” or any other word in a racist way or not. This article is about looking at the man or woman in the mirror and considering how your comment could be perceived by others. We can’t change other people, but we CAN change how we act and be cognizant of the words we choose to write online. If your comments are frequently perceived as racist when you know yourself not to be a racist, do you think it’s time to maybe choose your words a bit more carefully so you can convey your true meaning?

There are certainly plenty of overt racists on the internet from all races and they won’t be going away anytime soon. Dealing with trolls on the internet comes with the territory and if we stop feeding the trolls and ignore them that would solve that problem quickly. But alas, trolls are hard to ignore and someone is always going to challenge them which is exactly what they want.

Racists, Race-baiters, and agitators want to do their best to stir up angry sentiment among people of all races. As hard as it may be at times, just ignore them or report their comments to moderators to be removed. If you must reply, then keep it very succinct and call them a troll and leave it at that. Don’t call them a racist though because that is exactly the reaction they hope to get! They thrive on getting a rise out of people so keep that in mind when you engage them in pointless dialogue.

Oh, and one more thing… if you’re a white male and took this all as a condemnation of white people you should check your guilty conscience, because I never once said that these were specific to white people. Bigots come from all races and genders. So please stop and think before you comment online no matter what your race. Any race or gender can produce racists,  bigots and prejudiced people so keep that in mind.

“Those who will not reason, are bigots, those who cannot, are fools, and those who dare not, are slaves.”
― George Gordon Byron

Words can hurt and words matter, so choose yours more carefully and try not to be so defensive and always take empathy into account when you post comments online or speak with others. How might your words be taken by someone else? Is there a way you could phrase your comments to convey the same meaning without being perceived as offensive by others? Will you consider taking a two-week vacation from using the word thug and see if your comments are perceived any differently and let us know here?

Do you really need to waste so much time arguing with strangers on Facebook or on news sites when you could be spending time with your loved ones who are probably sitting in the next room?

If we all just used a bit of common sense, work on our empathy and try and avoid loaded words it would go a long way to calming things down. The obvious point is that “thug” remains a contested and highly-charged term, and that the struggle over its meaning and usage isn’t about to go away anytime soon. But if more people choose their words for carefully and empathize how they might be perceived by others, we can at least stop fanning the flames.

Here are some words you can try instead: criminal, ruffian, looter, rioter, murderer, thief, robber, burglar, hooligan, lout, delinquent, bruiser, heavy, goon, rogue, lowlife, loser, lawbreaker and my personal favorite yahoo! Pick terms that are as specific to the crime as possible.

So stop being so cognitatevely lazy and start using new words for a change that will convey your thoughts without inadvertently or intentionally offending other people. This is not about being politically correct it is about not trying to constantly be a shit stirrer just to get a rise our of people or collect Facebook likes. Try posting some cat videos if you want more likes for self-affirmation if you are that insecure.

What are your thoughts? We would love to hear your comments and opinions over the use of the word thug and racism in general. Let us know in the comments below or on Facebook.