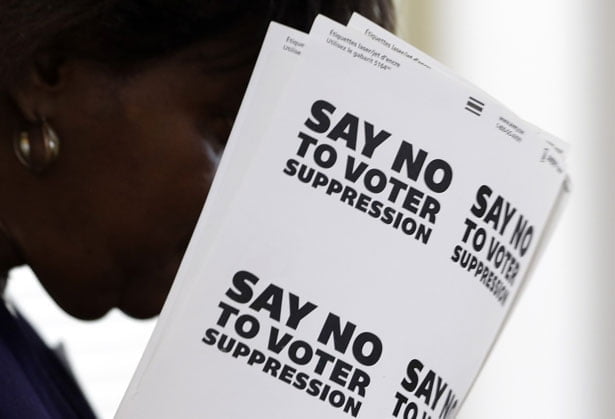 In 1963, only 156 of 15,000 eligible black voters in Selma, Alabama, were registered to vote. The federal government filed four lawsuits against the county registrars between 1963 and 1965, but the number of black registered voters only increased from 156 to 383 during that time. The law couldn’t keep up with the pace and intensity of voter suppression.

The Voting Rights Act ended the blight of voting discrimination in places like Selma by eliminating the literacy tests and poll taxes that prevented so many people from voting. The Selma of yesteryear is reminiscent of the current situation in Texas, where a voter ID law blocked by the federal courts as a discriminatory poll tax on two different occasions—under two different sections of the VRA—remains on the books.

The law was first blocked in 2012 under Section 5 of the VRA. “A law that forces poorer citizens to choose between their wages and their franchise unquestionably denies or abridges their right to vote,” wrote Judge David Tatel. “The same is true when a law imposes an implicit fee for the privilege of casting a ballot.”

Then the Supreme Court gutted the VRA—ignoring the striking evidence of contemporary voting discrimination in places like Texas—which allowed the voter ID law to immediately go into effect. “Eric Holder can no longer deny #VoterID in #Texas after today’s #SCOTUS decision,” Texas Attorney General Greg Abbott tweeted minutes after the Shelby County v. Holder decision. States like Texas, with the worst history of voting abuses, no longer had to approve their voting changes with the federal government. Texas had lost more Section 5 lawsuits than any other state.

The law was challenged again by the Justice Department and civil rights groups. After a lengthy trial, it was struck down, again, on October 9, in a searing opinion by Judge Nelva Gonzales Ramos, who called the law “an unconstitutional poll tax.”

Ramos found that 600,000 registered voters in Texas—4.5 percent of the electorate—lacked a government-issued ID, but the state had issued only 279 new voter IDs by the start of the trial. African-Americans were three times as likely as whites to not have a voter ID and Hispanics twice as likely. The law was passed by the Texas legislature, “because of and not merely in spite of the voter ID law’s detrimental effects on the African-American and Hispanic electorate,” Ramos wrote.

But five days later, the US Court of Appeals for the Fifth Circuit —one of the most conservative courts in the country—overruled Ramos, arguing that striking the voter ID law “substantially disturbs the election process of the State of Texas just nine days before early voting begins.” The appeals court curiously believed that blocking the voter ID before the election would do more harm to voters than preserving a law that could disenfranchise 600,000 voters in the state.

The Supreme Court upheld the Appeals Court decision on October 18. It was the first time since 1982 that the Court approved a voting law deemed intentionally discriminatory by a trial court. Justice Ginsburg dissented, joined by Justices Sotomayor and Kagan. “The greatest threat to public confidence in elections in this case is the prospect of enforcing a purposefully discriminatory law, one that likely imposes an unconstitutional poll tax and risks denying the right to vote to hundreds of thousands of eligible voters,” Ginsburg wrote.

Four major voting rights cases have come before the Supreme Court in the past month—from Ohio, North Carolina, Wisconsin and Texas—and in three instances the court has ruled to restrict voting rights.

The Roberts Court has set a trap for voters. First it paralyzed Section 5 of the VRA, taking away the federal government’s most potent weapon for stopping voting discrimination. Instead, it urged the Justice Department and civil rights groups to challenge discriminatory voting changes under Section 2 of the VRA, even though Justice Kennedy admitted in 2009 that “Section 2 cases are very expensive. They are very long. They are very inefficient.” Then, when a slew of lawsuits are filed under Section 2, the Supreme Court largely sides with those restricting voting rights. It seems like the Court’s conservative majority is planning to eviscerate every important part of the VRA.

The recent decisions show that Section 2 of the VRA is no replacement for Section 5. Earlier this year, members of Congress introduced a legislative fix for the VRA to resurrect Section 5 in states with five voting rights violations in the past fifteen years. One of the states covered by the new law would be Texas.