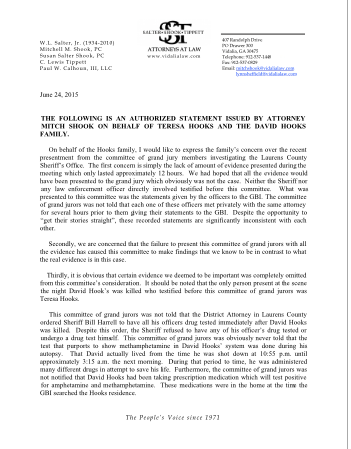 THE FOLLOWING IS AN AUTHORIZED STATEMENT ISSUED BY ATTORNEY MITCH SHOOK ON BEHALF OF TERESA HOOKS AND THE DAVID HOOKS FAMILY.

On behalf of the Hooks family, I would like to express the family’s concern over the recent presentment from the committee of grand jury members investigating the Laurens County Sheriff’s Office. The first concern is simply the lack of amount of evidence presented during the meeting which only lasted approximately 12 hours. We had hoped that all the evidence would have been presented to the grand jury which obviously was not the case. Neither the Sheriff nor any law enforcement officer directly involved testified before this committee. What was presented to this committee was the statements given by the officers to the GBI. The committee of grand jurors was not told that each one of these officers met privately with the same attorney for several hours prior to them giving their statements to the GBI. Despite the opportunity to “get their stories straight”, these recorded statements are significantly inconsistent with each other.

Secondly, we are concerned that the failure to present this committee of grand jurors with all the evidence has caused this committee to make findings that we know to be in contrast to what the real evidence is in this case.

Thirdly, it is obvious that certain evidence we deemed to be important was completely omitted from this committee’s consideration. It should be noted that the only person present at the scene the night David Hook’s was killed who testified before this committee of grand jurors was Teresa Hooks.

This committee of grand jurors was not told that the District Attorney in Laurens County ordered Sheriff Bill Harrell to have all his officers drug tested immediately after David Hooks was killed. Despite this order, the Sheriff refused to have any of his officer’s drug tested or undergo a drug test himself. This committee of grand jurors was obviously never told that the test that purports to show methamphetamine in David Hooks’ system was done during his autopsy. That David actually lived from the time he was shot down at 10:55 p.m. until approximately 3:15 a.m. the next morning. During that period to time, he was administered many different drugs in attempt to save his life. Furthermore, the committee of grand jurors was not notified that David Hooks had been taking prescription medication which will test positive for amphetamine and methamphetamine. These medications were in the home at the time the GBI searched the Hooks residence.