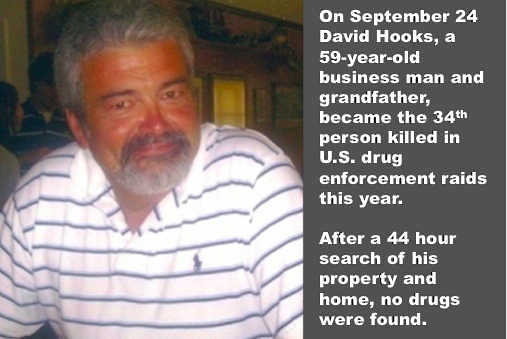 Laurens County grand jurors decided the evidence doesn’t support the filing of criminal charges in the 2014 shooting death of David Hooks. This is no surprise and as soon as I learned Chuck Spahos was the special prosecutor I knew the chance of justice was slim. Spahos is a strong advocate for police officers and  is a former cop. He was also one of the leading opponents of Allen Peake’s medical marijuana bill and his opposition is one reason why we so many diseases were removed from HB-1.  Grand Juries rarely go against the wishes of a prosecutor who develops a special bond with a Grand Jury. He even controls their lunch and restroom breaks!

I expected the version by the deputies to be in their favor. That is certainly to be expected. I was surprised to learn that the toxicology report showed that David Hooks had methamphetamine in his system. But I never claimed David Hooks was a saint and that toxicology report still doesn’t justify the mistakes that were made by these keystone cops. Meth is a stimulant and since Hooks was asleep the likelihood that he was under the influence that night are very unlikely.

Methamphetamine is generally detectable for approximately 5 days, after use in a standard urine test.
However, as to the longest time it’s been detected, the answer is a lifetime. Yes, for some people even one use can cause positive tests long after five days. Certain prescription medications can also cause false positives.

I read the entire report and what immediately struck me was the fact that Mrs. Hooks is deaf in one ear. Does the Sheriff of Laurens County not take into account that sometimes if you serve a warrant that some people might not hear officers yelling outside a door?

I am not deaf but I often use headphones to listen to music or turn the volume up pretty high on my surround system while watching a movie. I can guarantee you that if officers yelled at my door while I had my headphones on or was watching a movie there is zero possibility I would hear them. Did it ever occur to them to call his phone and let them know they were the police outside? How about turning on the police lights?

I think the only time officers should ever break into a home with guns drawn is when there is a life or death situation involving hostages or similar. Otherwise they need to show up with sirens and lights on so there is no confusion or simply do some surveillance and arrest people when they leave the house.

I will have a lot more to say on this report in a future article, but I am not the least bit surprised that no justice was served in Laurens County. Once the Jury heard the toxicology report it was game over and I see no evidence that they asked to examine any of the evidence or ask any detailed questions.