Sam Olens Spent $30.38 Million on Outside Lawyers in AG Budget 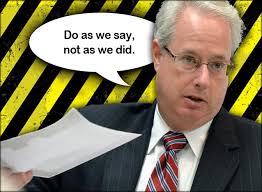 I received an email tip today likely due to a recent article I wrote entitled Meet your Attorney General Sam Olens I was less than kind to Monsieur Olens and suffice it to say he would prefer all voters in Georgia not share that link on Facebook or Twitter or he would likely not fare well in the election.

The latest tip I received contained some very troubling information:

According to the Open Georgia website, in Fiscal Year 2013, Olens had 285 personnel on the state’s payroll that, all total, consumed $16.542 million in legal expenses to staff the Department of Law.

Here is what is troubling. Olens has 285 people on the state payroll. Apparently those 285 people were insufficient to do the tasks required of an AG’s office in Georgia while keeping in mind that Georgia ranks dead last in corruption, Olens was fined $10,000 by a judge for mishandling the case concerning Nathan Deal. So Olens decides, I really need a lot more help because the 285 people I have working here now just aren’t getting the work done. Also keep in mind that citizens in Bibb, Laurens, Spalding, Valdosta and many others have reported to me that they have sent complaints along with very detailed proof of local corruption and all they get is an impersonal form letter that says “Sorry, contact your local authorities”. Now keep in mind it is the local authorities all those people were trying to report to Sam Olens. So he is advising them to contact the people who are accused of being corrupt? Yeah, that makes a lot of sense.

So my question is why would Sam Olens decide 285 people aren’t enough to send out rejection form letters? Exactly what work are they actually doing? They sure as hell aren’t working with the ethics board on cases even though they are massively underfunded and also massively understaffed. I did as much research as I possibly could to figure out what is keeping Sam Olens and his 285 employees so busy and I still do not have a clue.

I took a look at the Press Room of the AG Website. Curious the timing of that lawsuit defending open government to coincide so close to this election don’t you think? He sure has been advertising the hell out of that 2 year old lawsuit that magically was recently won. Aside from a lot of political grandstanding against Obamacare and other social and even medical policy issue he should keep his nose out of I didn’t see any big cases he had won or would justify all this expensive outside help.

In fact most of the press releases seemed to include cases and stories that had no involvement with the Attorney general’s offices at all. Many were local cases where local DA’s and local grand juries were involved not the AG office. Most of the releases I saw where Olens name was mentioned was where he applauded some issue like the Hobby Lobby decision or recognizing national human trafficking awareness day. What actual Cases of fraud did you or your office prosecute Sam?

In addition to those 285 people on the state employee payroll, Olens also spent a total of $30.38 million on outside, contract-vendor legal services.  A total of, oddly enough, 285 vendors (lawyers and law firms).

If Olens has 285 frigging people (lawyers upon lawyers upon lawyers) working (presumably) and getting paid $16.5 million, what the heck is all the $30 million some-odd money doing going to outside legal firms for? Someone is spending money like a drunken sailor in our state government.

And, so, just on a glance of a few of these vendor-contract law firms, I checked the Ethics.Ga.GOV website to see what kind of contributions might be flowing from these contract law firms to Sam Olens’ campaign coffers:

One wonders if when Sam Olens calls these vendors (or Sam Olens’ fundraising personnel calls these vendor-contributors), does the conversation EVER cross to the side of “Well, you know, I gave you a pretty good book of business from MY Department of Law…When can I expect your check to my re-election campaign?”

The Curious case of Burrell Ellis

Now as much as people in Atlanta like to think the rest of the state follows your news I assure you we don’t. People in Macon, Columbus, Savannah, Albany, Augusta, and other cities really have no idea what is all the talk at water coolers inside 285 since we have our own local stories and lives. Few people outside Atlanta have any idea who Burrell Elllis is or why he is on trial. Briefly:  W. Burrell Ellis, Jr. is the suspended CEO of DeKalb County, Georgia and is no longer the acting CEO. Ellis was recently charged with 14 felonies and awaits trial. He was removed from office by the Governor after failing to step down. He has been the target of a grand jury probe for alleged corruption. The investigation and court hearings are ongoing. In March 2013, the county denied his request to set up a legal defense fund. As DeKalb County’s Chief Executive, CEO Ellis was responsible for administering the county’s $1.2 billion annual budget, managing its more than 7,000 employees and delivering services to its more than 700,000 residents.

Burrell is basically on trial for “shaking down” vendors for campaign contributions. Now the $47 million Sam Olens has spent might look like peanuts compared to a $1.2 billion budget but the size of the budgets are irrelevant. Is it possible if not probable that Ellis, even if guilty of what he has been accused of doing, is far from alone in the Peach state? How widespread is this practice at other municipalities or the county or state level? What is Sam Olens doing to fight that?

State budget and Duties of the Attorney General

The Attorney General’s budget for the 2013 fiscal year was $59,813,68. So that $47 million figure is still below that figure but the AG has a lot of various departments as you can see in the chart below. Were these outside firms used evenly among all the various departments or were they mostly used in very specific ways or for certain divisions?

Here are the official duties. Now that list of duties and responsibilities is a long one. I realize much of that work in mundane day to day activities, but I still am having a very difficult time understanding why all these expensive outside contracted firms needed to be hired in the first place. The fact that outside contracted lawyers and firms are eating up over twice the funds as actual state employees is very troubling. What is even more troubling is the number of donators on that list. Is this the modus operandi for Georgia? Do people give a little to get a lot?

Questions that need to Be Asked and Answered before November 4th

Here are the questions I would like to see answered by Sam Olens and his office. These would also make some very interesting open record requests by anyone that wanted to find out the answers. This is an open letter to Sam Olens and if he chooses to answer these questions I will publish his responses unedited.

What is your total budget allocated to you each year by the state legislature? (For 2013 I saw $59.8M so want to make sure)

Have to gone over or under budget these past four years and by what amount?

How were those 285 additional staff selected?

How many of those 285 hired contributed to your campaign or to other high ranking officials like the Governor or others?

Why are the additional 285 staff costing Georgia taxpayers $30.38 million while only doing part-time work. Your full-time staff of 285 are presumably putting in 40 or more hours a week and are only costing $16.5 million. How can you justify paying twice the amount to part-timers putting in far fewer hours. wouldn’t it simply make more sense to hire more staff to save money?

Did you have a personal connection to these outside firms and lawyers that could have influenced your decision to hire them based on that relationship as opposed to simply choosing based on their skills?

Did you at any time try and negotiate for lower rates or simply pay them the invoices they sent you?

Did you at any time during a course of any conversation, email, text, social media, phone call or any other communication ever mention donations to any of the people who were eventually contracted to work for the AG’s office?

What specifically has your office been doing that required you to hire exactly 285 additional staff?

Have you spoken to legislators, senators, or the Governor about the need to hire more full-time staff to work directly for your office if you are that busy since it appears they would cost half as much as outside help.

How many of the outside firms hired were minority or women? How many were known to be Republican supporters and campaign donors? How many were hired outside of Atlanta?

Georgia ranks dead last in corruption, how many cases of corruption or ethics violations has your office prosecuted since this is an important duty of an AG?

How many rejection form letters did your office send out to whistleblowers and citizens from around the state?

Why is your office spending so much time, treasure, and resources to fight against lawsuits instead of investigating actual corruption cases as CBS reports?