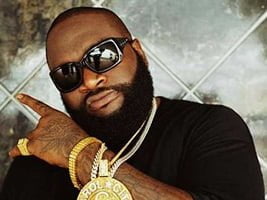 Maybach Music Group founder, Rapper Rick Ross, 39, best known for his 2006 single “Hustlin’,” and his body guard, Nadrian Lateef James, 42, were arrested earlier today on charges of kidnapping and aggravated battery by the Fayette County Sheriff’s Department, assisted by the U.S. Marshals Service fugitive task force. The charges arose from an incident several weeks ago when Ross was having some work done on his home (formerly owned by former World Heavy Weight Champion Evander Holyfield), and allegedly got into a fight with one of the workers, resulting in his restraining and pistol-whipping the worker.

When the officers went to arrest Ross, those inside refused to open the gate, according to Jim Joyner, a supervisor with the Marshals’ Southeast Regional Fugitive Task Force. “Once officers got past the gate, someone inside opened the front door so they didn’t have to break it down,” Joyner said. Ross and the bodyguard were then taken into custody without incident, Joyner said.

Ross, born as William Leonard Roberts II, was also arrested two weeks ago on a misdemeanor marijuana charge in Fayette County. Ross has been arrested on similar charges 3 times in the past, in Miami in 2008, in Louisiana in 2011, and in North Carolina in 2013.”

Ed. Note: Money, fame, adoration, respect, and you still chose to act like you are living in the Hood. You pistol whipped and restrained a worker that was working on your house? You know your mama raised you better than that. My…My.

Young kids look up to you as a role model, and we suspect you would not look good in prison stripes. “Whatcha gonna do” next, Rick? It is up to you…. We suggest that you “Straighten Up and Fly Right,” and enjoy the good life that you worked so hard to achieve. As we said, a lot of people look up to you, and it is up to you to live up to that image. So far you are not doing so good….