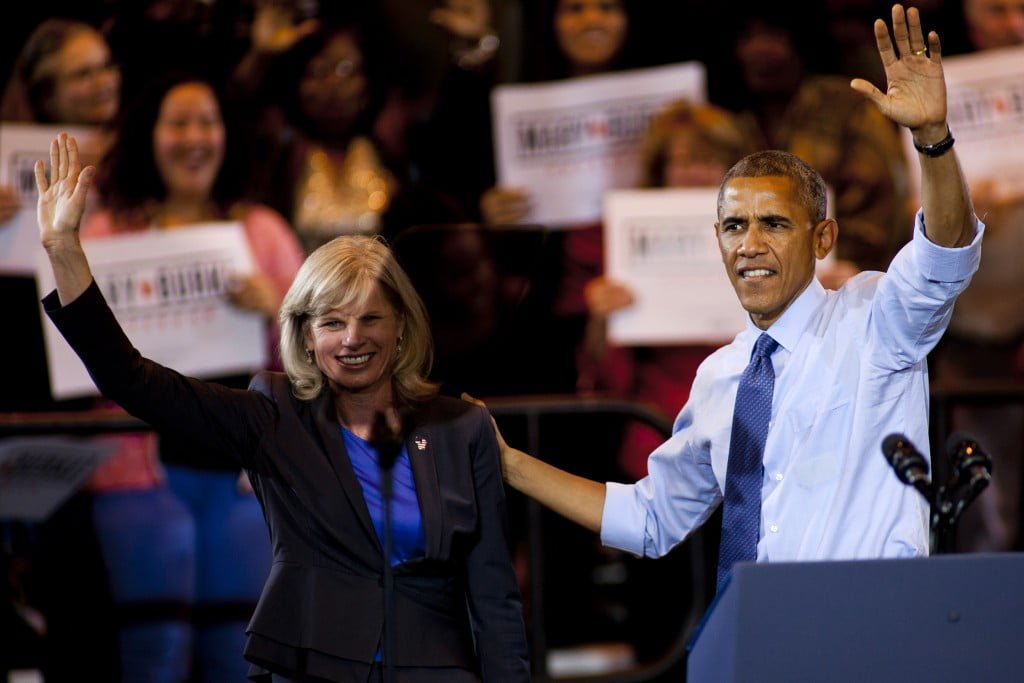 President Barack Obama has been relegated to campaigning in places he is popular, like Wisconsin, where he showed support for Democrat Mary Burke who is running against incumbent Gov. Scott Walker. Photo by Darren Hauck/Getty Images

Today in the Morning Line:

Obama’s blue-state push: President Obama largely has been missing from the campaign trail during this 2014 campaign. His unpopularity, sitting at about a 40 percent approval rating, is at about the lowest point of his presidency. And the places where this campaign is playing out, where the most competitive Senate races are, are in states he lost by double-digits during the 2012 presidential election. So over this last week, the president has been relegated to campaigning in places he is popular — blue states — and mostly for Democratic gubernatorial candidates, not Democrats in close Senate races. Last night, the president rallied at a school in Milwaukee for Democratic gubernatorial candidate Mary Burke, who is in a tight race with Republican incumbent Wisconsin Gov. Scott Walker, a potential 2016 contender. As the Washington Post’s Katie Zezima noted Tuesday, “All of the places [Obama] visits will have at least one thing in common — the same thing all his fall stops have shared: they are places where people like him. Really, really like him.”

Playing it safe: For example, “Of the 850 votes cast in the school’s Milwaukee ward last year, 843 of them were for Obama,” Zezima wrote. “To put Obama’s week in some perspective, the stop on his itinerary where he had the least support in 2012 is Portland, Maine,” where “he got just 75 percent of the vote in that liberal stronghold, in a state that twice elected him.” White House Press Secretary Josh Earnest tried to put his best spin on it before a skeptical White House press corps. “There are so many stops that I have to look up exactly where the President is traveling,” Earnest said. That drew laughter. Just how toxic is President Obama in these red-state Senate races? Hillary Clinton is in Iowa today, and while President Obama is in Michigan Saturday, Clinton will be in Kentucky and Louisiana](http://www.nola.com/politics/index.ssf/2014/10/marylandrieuhillary_clinton.html) before heading to New Hampshire Sunday. Even Sen. Elizabeth Warren, the Massachusetts populist firebrand, was in Kentucky Tuesday, New Hampshire Saturday, and Iowa and Colorado before that. Jon Stewart called all this Democratic distancing from Obama, “POTUS-Partum Depression.” Here’s where the president’s been recently and where he’s going:

Hardly an historical aberration: So what’s going on here? Is President Obama so toxic that he is unlike past presidents? Not quite. First, like we noted above, there are the fundamentals of this election. Despite being reelected in 2012, he lost the most competitive states where the hottest Senate races are being run by double-digits to Mitt Romney. Plus, there is truth to the so called six-year itch. Seven presidents have been reelected since the Great Depression, and in those second terms, a president’s party has lost an average of 26 House seats and seven Senate seats. The worst second midterm for any president since WWII was Dwight Eisenhower’s. And it’s a reminder that, even then, “small-ball” issues dominated news of the day and drove politics. Eisenhower’s “problems included influence-peddling charges against his White House chief of staff, national frustration over Soviet gains in space and missile technology and a bitter economic recession,” [notes the Senate Historical Office]https://www.senate.gov/artandhistory/history/minute/MidtermRevolution.htm) of the 1958 “Mid-Term Revolution.” The 13 seats gained by Democrats was and still is the single-largest gain by one party of Senate seats. That election gave Democrats a 64-36 majority and laid the foundation for the Great Society measures of the 1960s.

Quote of the day: “Because early voting runs through this Friday, you don’t have to wait till Election Day — you can vote all week. I mean, you can only vote once. This isn’t Chicago, now. I’m teasing Chicago. I’m messing with you. That was a long time ago,” President Obama to a rally in Milwaukee, Wisc., for Burke.

Daily Presidential Trivia: On this day in 1901, Leon Czolgosz, the assassin of President McKinley, was electrocuted. Where was President McKinley assassinated? Be the first to tweet us the correct answer using #PoliticsTrivia and you’ll get a Morning Line shout-out. No one guessed Tuesday’s trivia: What document is inscribed on the Statue of Liberty’s tablet and who was the principal author? The answer was: July 4, 1776, representing the Declaration of Independence, written by Pres. Thomas Jefferson.

Sign up here to receive the Morning Line in your inbox every morning.