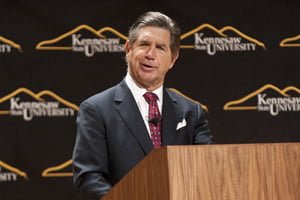 Thanks to an investigative report by Channel 2 Action News out of Atlanta it was discovered that KSU President Daniel Papp received hundreds of thousands of dollars he never worked a day to earn. Keep in mind this happened WHILE professors salaries have remained largely stagnate and tuition at  public universities in Georgia have skyrocketed.

The exact amount was $577,500 and this was paid to Papp by the KSU foundation. One would think a  foundation created to support KSU could find far better uses for that money than paying an already very highly paid multimillionaire university president. Ask various clubs, professors, and KSU students and I am sure they could tell you areas where that money could be put to far better use than lining Papp’s already well-stuffed pockets.

“Retiring now is best for the University — it’s time for us all to move on to the next chapter,” said Dr. Papp. “It is clear that a combination of misunderstandings, miscommunications and mistakes occurred between the KSU Foundation, the University System Office and myself. Internal controls were not sufficient to identify and prevent these mistakes, and it is my understanding that measures will soon be put into place by both the University System and the KSU Foundation to assure that situations like this do not happen again.”

Yeah right…misunderstandings was the cause of the issue? No, it was plain old greed and the good ol’ boy network at it’s finest.  What sort of bizarre world do these wealthy education elites live in where there is any sort of circumstance where a president should receive over half a million bucks while tuition fees have drastically increased and salaries for the people who actually teach have remained stagnant for doing nothing? This was no misunderstanding, it was a case of being caught with your hand in the cookie jar and playing dumb about it.

The Atlanta Journal and Constitution found numerous additional irregularities. Reports suggest that as many as six very high ranking administrators have been placed on leave by Dr. Houston. It is quite amazing how money seems to move around at KSU and indeed all over the USG with no supervision by our elected officials.  I wouldn’t be  surprised in the least if this investigation reveals collusion and numerous violations of federal  and state law. KSU seems to be rotten to the core at the top which is no surprise given how clueless Papp seems to be about his own misdeeds.

As a result of the AJC open record request they discovered many other conflict of interest and ethics breaches.  Going back as far as 2012. These include instances of being compensated for a car allowance, annual leave, and dining hall services. A special review of Randall Shelton, assistant vice president for Auxiliary Services and Programs, found that he did consulting work for one of the school’s current vendors, Ballard Brands. He also traveled to conferences for the company but charged Kennesaw State for the trips. But it gets even better! He also interfered in the bidding process for companies competing for a dining contract, which resulted in an annual donation to the department he supervised. Another top administrator named Gary Coltek resigned from Kennesaw State in late 2015 and has been accused of misusing state resources, conflicts of interest, nepotism and other ethics violations.

Papp is set to retire from Kennesaw State on June 30. I wonder if he will get as generous a golden parachute as Huckaby’s other disgraced pal Ricardo Azziz who resigned as Georgia Regents president with a total severance package worth over $1.1 million.

Likewise, I suspect as the USG churns more presidents at places like Valdosta, Georgia Southern and possibly other institutions the same issues will likely be present that might include irregularities in budgets, missing money, fees. Mind you this is all a theory and I have no proof but after a long pattern of the USG operating like a shell game it is a reasonable hypothesis. I’m not sure when things became this dicey but perhaps the approval for a football program at KSU and GSU and the big dollar student fee games were partially responsible. It’s not just the Athletics fee though since money seems to be shifted between the tuition funds and the fee fund codes. That blends tax dollars with tuition fees which can cause these sorts of scandals that only occasionally seem to come to light.

It also explains why places like UGA are pleased as punch that SB 232 passed. The bill, SB 323, would give all public college athletic associations 90 days to respond to an open records request. The bill covers all Georgia public colleges, including the four most powerful athletic departments – UGA, Georgia Tech, Georgia State and Georgia Southern.

“The amendment is so broadly written, it would make secret contract terms, letters of complaint or inquiry from the NCAA, plans for the expenditure of university and athletic association funds, and even more,” 1st Amendment advocate Manhaimer said. “No other public agency in Georgia is given 90 days to conduct its business in secret.”

Incompetence and scandals are nothing new at the USG. Indeed,  such is the norm with the way Chancellor Hank Huckaby has managed the University system of Georgia. Huckaby has been an unmitigated disaster as chancellor. Huckaby’s only legacy includes merging  colleges under the guise of cost savings while the contrary appears to be true. He also destroyed Georgia Perimeter College by running out a very successful president named Anthony Tricoli who increased enrollment for minority students.  This resulted in $16 million in overspending ($9 million of which has never been accounted for), the loss of 300 jobs, a drop in enrollment by several thousand students per semester, extensive negative publicity for the school, and the destruction of the career of one of the USG’s “rising stars”—Anthony Tricoli, who has never been able to obtain another job in higher education after being publicly blamed by the USG for all this damage. After Huckaby destroyed GPC he decided to just allow Georgia State University to swallow it up which resulted in a negative impact on both schools by most accounts.

It was also recently reported that Huckaby is charged with treating black and white universities very differently. Huckaby has an established pattern of forming search committees to select presidents of majority white colleges but has simply appointed his own choices to serve at Historically Black Colleges/Universities.

I dare you to find anyone familiar with the University system of Georgia who is not one of Huckaby’s well-paid minions who feels his tenure has been a success. The once proud USG is slowly but surely being dismantled before our eyes just at a time when Georgia needs more educational opportunities for the struggling poor and middle classes. Meanwhile the oblivious politicians as always turn a blind eye because they want those box tickets at the UGA games offered by USG lobbyists.

If you wonder how all this collusion, corruption, greed, and incompetence goes unnoticed just remember that a group in Georgia nicknamed “Regents Row” by reporters is the largest lobbying group in the state. An Atlanta Journal-Constitution review of state records showed the system had about 20 staffers who lobby at the Statehouse, excluding visits by college presidents. That team was paid about $2.5 million in 2010.

There is a very large and powerful group of people intent on making sure the dysfunctional Board of Regents who administer the University System of Georgia’s $7 billion dollar budget continue to operate in the shadows. It will take a lot more than a few scandals like this to cause the ol’ boy network at the Gold Dome to take any notice. Let’s hope we have a university system left to save before Huckaby either retires or is  run out of town. If he remains much longer we may only have one public university for the whole state.