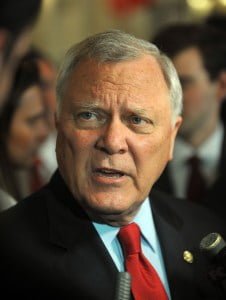 If you have been following the news on the push for medical cannabis in Georgia you are probably aware that it took a major blow when Governor Nathan Deal decided to not allow in-state growing. Despite all the meetings and panels throughout the past year, despite decades of scientific and medical evidence, despite 23 other states that already allow medical cannabis….despite all those reasons Nathan Deal thinks we need one more year for sick Georgians to suffer. I would love for Nathan Deal to tell that to the families suffering and dying every single day and hour in Georgia right now. One year is not only an eternity for many of them but possibly also a year too late to help them.

Nathan Deal also seems to either be unaware or simply doesn’t care that the side effects of prescription meds used to treat so many of these debilitating illnesses are completely inefficacious or can cause more harm. Or perhaps it is simply a case of old fashioned politics and donations. His two allies in the Georgia House and Senate Cooper and Unterman like Nathan Deal received big donations from GW Pharma. This company is opposed to loosening  medical cannabis laws or allowing people to grow their own plants because then they wouldn’t be forced to spend thousands on Epidolex which is a medicine they produce.  Profits over People.

Republican representative Allen Peake from Macon, GA has been the face of HB1 which is know as Haleigh’s Hope Act.  If you click that link you will see a lot of lines crossed out. In 1980 the Georgia legislature passed something known as The Controlled Substances Therapeutic Research Act. HB1 essentially cancelled much of this out  and renamed it Haleigh’s Hope Act. Named for Haleigh Cox a young girl that suffers from epileptic seizures.

The Atlanta Journal just published a debate of sorts. It features a letter from Allen Peake and an opposing letter from Sebastien Cotte. Allen Peake writes a very optimistic letter about HB1 and the changes by Nathan Deal to disallow in-state growing.  I also recommend you read the comments below the article as well which have some very good insights.It was a comment by James Bell that inspired me to write this article.

Mr. Peake takes the “Pro” position that everything is still peachy and this extra year and more studies is not a setback. He refuses to blame or criticize Nathan Deal and tries his best to put a positive spin on very bad news.

Below the letter by Mr. Peake is the one by Sebastien Cotte. Sebastien Cotte, his wife Annett and son Jagger lived in Stone Mountain before moving to Colorado as medical refugees for their son Jagger who has seizures.

The letter by Mr. Cotte does not mention Allen Peake by name even once. Alen Peake has been very supportive of these medical refugee families. I suspect that even though many of these families are extremely upset about removing in-state growing they also want to keep the blame and focus on Nathan Deal and are reluctant to directly fault Allen Peake. Mr. Cotte takes the “Con” position. He is extremely diplomatic but you can sense a lot of anger, frustration, and shock at Nathan Deal’s decision to disallow in-state growing. He writes that few medical refugees will be helped by this neutered down version of HB1 and few will be able to return to Georgia.

I have experienced this hardship first hand. My wife and I moved our son Jagger to Colorado to gain access to cannabis oil to control his severe pain and seizures resulting from terminal mitochondrial disease. Leaving Georgia was extremely difficult: there was a possibility Jagger wouldn’t survive the six day road-trip. However, we made it and are providing Jagger with life-saving cannabis oil which has significantly reduced his seizures and pain episodes. Since starting on the oil, Jagger has also shown significant improvements in his cognitive abilities and for the first time in the past three years, he is smiling again.

In order to bring Georgia families home, we must have in-state growing in Georgia in 2015. Telling families and patients that they will not be prosecuted if they come home but not providing life-saving cannabis oil in Georgia, may be well-intentioned, but once again it leaves families with little hope of helping their sick children. And it leaves adults suffering from debilitating illnesses little hope of finding relief.

There is much more in his letter so I hope you will read his impassioned plea to Nathan Deal to change his mind.

The Unreasonable and Unscientific Fear of Tetrahydrocannabinol

Conservative Republicans seem to be terrified of THC. Even Allen Peake who has led the charge for HB1 seems opposed to more than trace amounts of THC and has called for a limit of 5%. It is important to remember than THC which can give people the “high” effect is an essential component towards treating many illnesses.

It is also important to remember that Morphine and Heroin are essentially the same thing. Heroin is diacetyl morphine. That is, heroin is simply morphine with an acetyl molecule attached. In terms of effects, they are exactly the same — and medically interchangeable — except for dosage. In fact, they are both converted to the same form of morphine when they get into the body.

The only significant difference between them is that the acetyl molecule allows heroin to cross the blood-brain barrier more quickly than ordinary morphine. The result is that, in terms of dosage, heroin is about three times stronger. That is, one grain of heroin equals about three grains of morphine. Otherwise, they are nearly identical and yet one is perfectly acceptable and the other is pure evil incarnate. If they will allow heroin to be used to treat pain by another name then why won’t they allow marijuana to treat over a dozen ailments by another name as well? Why are they so terrified of the so called “high” effect?

Tetrahydrocannabinol, or THC, is just one of the roughly 85 cannabinoids found naturally in marijuana and causes the euphoria or high. Clinical trials and the experiences of hundreds of thousands of patients have shown that THC, and strains of marijuana that include THC, provide important medical benefits for individuals suffering from pain, multiple sclerosis, nausea, and wasting disease. THC is also the cannabinoid most responsible for marijuana’s psychoactive effects. While THC does cause marijuana’s “high,” patients use marijuana for relief, not for euphoria. Patients who inhale marijuana can titrate their dosage precisely to use only as much as they need, reducing or eliminating the euphoria. Some use marijuana only before bed.

Studies have shown that marijuana that includes THC can alleviate a host of debilitating conditions, including:

You can view the entire 1980 Act HERE as a PDF. The parts about medical cannabis begin at page 62 as Article 5. Here is the link for the 2015 version also known as HB1 also Known as Haleigh’s Hope Act.  Basically they seem to have simply taken the Act passed in 1980 and put lines through most of it. I bolded what was not struck through and gave it a red font to stand out a bit more.  So exactly how is the 2015 version moving us forward when people in Georgia 35 years ago passed a much more reasonable and comprehensive Act than the version in 2015? How is this not a step backwards?

Georgia’s medical marijuana program faced a major problem when the legal pot supply dried up soon after the 1980 Act was passed. In 1982, the National Institute on Drug Abuse and the Drug Enforcement Administration stopped delivery of the country’s sole source of legal cannabis. Georgia’s program had effectively ended without ever supplying a single patient with the medical marijuana promised. Subsequent Georgia governors had the authority to reappoint the board, but never acted. As a result, the law has lingered on the books for the last 35 years. I would love to know how HB1 can possibly be considered a step forwards when the law from 1980 was already in place and simply needed a source of legal cannabis and a Governor with some backbone and no ties to big Pharma.

The law from 1980 certainly needed to be updated.

The law relied upon federal cooperation and supply, therefore rendering the law cumbersome and ineffective in accomplishing its goal to further the research into the benefits of medical marijuana. But instead of simply updating it to allow a supply of Georgia grown cannabis many of the best parts of the law were struck down and instead we have a new version with far less potential to help nearly as many people as the one in 1980 had hoped to accomplish.

Take a look for yourself: Parts in red are HB1 and Parts with line strikethrough is the version passed in 1980