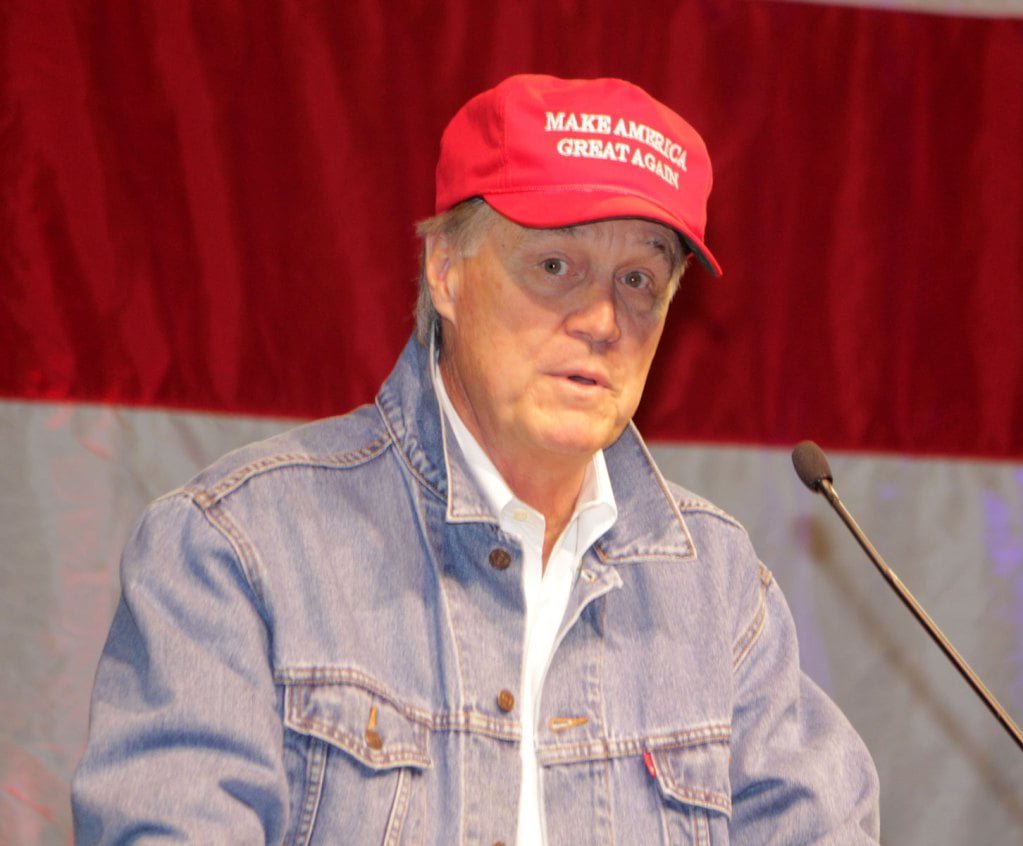 Sen. Perdue tells Faith and Freedom attendees to pray for Obama. “We should pray like Psalm 109:8 says: Let his days be few”

Perdue smiled after using invoking the “days be few” passage as the audience chuckled which you can observe in the short video clip here.

This is often called the “Obama Prayer” as the Atlantic points out below.

“Perdue didn’t make this up. In fact, this verse—sometimes labeled “the Obama Prayer”—has been circulating for years among conservatives. Gawker’s John Cook noted the prevalence of the reference on internet message boards and in CafePress t-shirts and bumperstickers back in November 2009. Other cases have popped up over the years, from the Manatee County, Florida, sheriff’s office to the Kansas House, where the speaker forwarded an email involving the psalm.”

The full Bible verse being referenced states: Let his days be few; Let another take his office.
Let his children be fatherless And his wife a widow.
Let his children wander about and beg; And let them seek sustenance far from their ruined homes.
Let the creditor seize all that he has, And let strangers plunder the product of his labor.
Let there be none to extend loving kindness to him, Nor any to be gracious to his fatherless children.
Let his posterity be cut off; In a following generation let their name be blotted out.
Let the iniquity of his fathers be remembered before the LORD, And do not let the sin of his mother be blotted out.
Let them be before the LORD continually, That He may cut off their memory from the earth;
Because he did not remember to show loving kindness, But persecuted the afflicted and needy man, And the despondent in heart, to put them to death.

Senator Perdue’s press spokesman issued this statement after the outrage started pouring in:

Senator Perdue said we are called to pray for our country, for our leaders, and for our president. He in no way wishes harm towards our president and everyone in the room understood that. However, we should add the media to our prayer list because they are pushing a narrative to create controversy and that is exactly what the American people are tired of.

Regardless of what the press release states, the message from that Bible verse was crystal clear and the chuckles from the audience confirmed they understood his true meaning. President Obama isn’t running again and the months in office he has left are very few. There is no doubt what this Biblical passage meant and why Perdue chose to use it. There was no misunderstanding and this is no conspiracy by the media.  The “Obama Prayer” is widely known and clearly understood. It wasn’t even coded language, it was blatantly praying for Barack Obama to die. A sitting United States Senator just asked people to pray for the death of a sitting President and the audience laughed!

Can you imagine the outrage this would cause had the president been a Republican and the Senator a Democrat! David Perdue has been a complete embarrassment to Georgia but we were used to that, but it appears he really wants to be Trump’s selection as VP. Perdue has been Trump’s biggest cheerleader in the state, so maybe he thinks he needs to start saying outrageous and increasingly outlandish remarks to get noticed by The Donald.

Only recently Perdue was quoted saying ‘It’s time to let Trump be Trump’.

In a rambling and mostly incoherent rant recently, Senator Perdue published this letter.

The antiquated tactics that were used unsuccessfully against me have been deployed against Mr. Trump, and the voters responded in similar fashion. They ignored the preachy pundits, the ideology police, and the Washington establishment. They chose a different type of candidate because they believe to get different results, you have to send a different type of person to Washington.

Mr. Trump’s nabbing of the presidential nod embodies a dramatic shift in the political paradigm. Many voters are now more motivated by their frustration with Washington than their ideology. As I’ve said all along, this movement is bigger than party or ideology, or even, dare I say, Trump himself. However, I’m not dismissing the incredible skill set our nominee possesses…

The negotiation strategy outlined by Trump the Dealmaker in his signature book gives key insight into Trump the Campaigner. He is focused on the American people’s shared frustration with politicians, bureaucrats, and the media. He is bold and unpredictable, always keeping the opposition off balance. And he is a master of earned media.

Let’s not forget some other reasons Trump and Perdue seem to be a match made in Heaven.  (The kind of Heaven the Faith and Freedom attendees believe in at least) Perdue blocked a Georgia judge simply because he was part of a Latino group. Dax Lopez was a very respected and qualified judge. That will certainly get the admiration and respect of Donald Trump.

As a quick reminder to all of you, Perdue made his millions by taking over companies and outsourcing American jobs overseas. The AJC reports that in 2002, Perdue took over a manufacturing company in North Carolina that closed its doors just months after he came on board. Thousands of workers lost their jobs, but Perdue walked away with a cool $1.3 million for his trouble.

Years later, another company he led had to shell out tens of millions of dollars to settle lawsuits claiming Perdue made over $40 million in a buyout deal, while stockholders were cheated out of better profits.

I wish I could say I feel bad for the GOP, but Trump is exactly what they deserve.  For decades the Republicans have used a socially conservative agenda with wedge issues to bash gays, the poor, minorities, women, illegal immigrants, and now Muslims  to dupe working class whites into voting for them and supporting their market capitalist agenda. The very same  economic agenda that screws over people who work for their money and has created the greatest economic inequality since the Great Depression.

I want to ask David Perdue what exactly he has done that is so different from any other rich empty suit GOP senator? Is calling yourself an outsider and then voting along with everyone else in your party almost all the time a thing? Exactly what waves has he made in D.C. besides a lot of empty rhetoric and claiming to help veterans while he does the opposite?

David Perdue won a GOP Primary because of who is is not, not who he is. Georgia would have voted for pretty much anyone with an R behind their name in 2014. When exactly does he stop patting himself on the back and actually start doing his job?