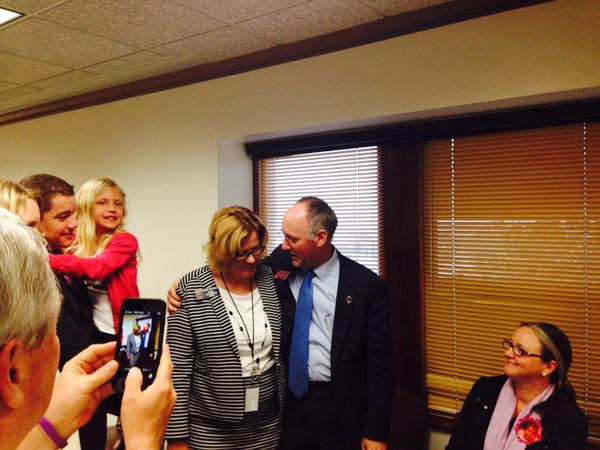 The Georgia Senate’s version of medical marijuana just passed committee a short while ago. It excludes fibromyalgia but adds traumatic head injuries. It also includes cancer and sickle cell disease for a total of nine included conditions. It also adds adults to the list of people able to take the oil. This is a big change from last week where it was limited only to children with epileptic seizures.

The photo on the left shows Allen Peake embracing Senate Health and Human Services Chairwoman Renee Unterman, R-Buford. This is the woman that was behind defeating this bill last year and also the one that fought to remove Fibromyalgia and weaken HB-1. A lot of pressure was brought to her and the Senate to pass the HB-1 unaltered.

The exclusion of Fibromyalgia was a devastating blow to Katie Crosby who suffers with this condition and has been fighting hard for others in the state with fibromyalgia as well. She along with so many other Fibromyalgia sufferers will need to continue to seek relief outside of Georgia. She and many others in the state are not celebrating today and probably are angered to see Allen Peake embrace the lady most responsible for all these delays and hurdles.

In complete and utter despair that #Fibromyalgia was cut from #HB1 by GA Senate. No words – only many tears and more #pain. #gapol #mmj

The original version of HB-1 in the House had already been whittled down to appease the fringe Republican right that are out of step with most Georgia voters in polls. Removed from the original HB-1 are : Glaucoma, AIDS, ALS, Alzheimer’s disease, Muscle spasticity disorder, PTSD, Autism, Tourette syndrome, and terminal illnesses that involves severe pain, nausea or wasting.

You can now add Fibromyalgia to that list. This is what happens when you let part-time legislators  make medical policy instead of simply allowing doctors to do their jobs and prescribe it when they deem it appropriate. Politicians should never try and tie the hands of doctors when it comes to picking and choosing conditions or dosages. Having listened to some of their speeches, I not only question their IQ’s but am also keenly aware of their ties to lobbyists from pharmaceutical companies that are opposed to allowing marijuana to be used as a medicine. It would result in lower profits if patients can grow their own medicine instead of relying on companies for treatments. Follow the money as they say.

I dare you to try and find even one other example of other medications where legislators not only micromanaged which conditions are allowed but also dictated the strength of a key ingredient as well as the delivery method. The reason I dare you is there are no other examples where this has been done. It is precedent setting and a very bad one at that.

There are dozens of others conditions where cannabidol oil could be efficacious. Not to mention promising delivery methods like skin patches, vaporizers, edibles, and many others that aren’t allowed under this revised HB-1. It seems Georgia legislators are bound and determined to keep Georgia behind other states.

Another reason people need to have measured enthusiasm is all the hoops and hurdles patients will need to jump through to ever become eligible for a prescription card. And once they navigate all the government red-tape there is the expense. This will not be covered by insurance and some patients could be looking at out-of-pocket expenses into the thousands. Well, assuming they can even buy any of the oil in Georgia. Nathan Deal in his infinite wisdom decided to axe in-state growing which means procurement will be extremely difficult for many. Buying it from another state is easier said than done and means breaking laws if you can even manage to buy any from other states which often have residency requirements.

Even though this is a small victory, it is also a pyrrhic one.  If you are among the people that could benefit from marijuana oil but your condition is not listed you have no other choice but to wait longer or move to another state. And even for those on the approved list you will have a long, arduous, and expensive journey ahead of you before you will be able to ever buy any in Georgia.

Until Georgia joins other states and allows the use for any all medical conditions that doctors feel warranted, allows patients to grow their own plants, fully decriminalizes it, and eventually just legalizes it for recreational use as well…I would hold off on the celebration. We still have a long fight ahead of us. But luckily blue and no-haired Republicans in Georgia will be dragged kicking and screaming into the 21st century whether they like it or not as even younger Republicans think their opposition is untenable and frankly a little crazy.