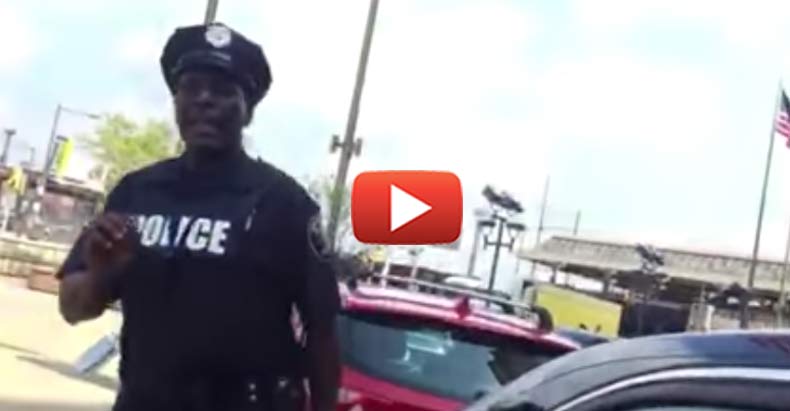 Philadelphia, Pa — A woman on her way to a conference session about surveillance by police got some great material as she was harassed by a cop for parking the wrong way.

The Rhode Island resident was in Philadelphia for the International Society for Technology in Education conference, waiting for a friend in her vehicle. A police officer noticed that she was parked in the wrong direction at the Amtrak 30th St. drop off.

Not satisfied with simply writing a ticket, the cop went into irrational authoritarian mode. Perhaps he was agitated at being filmed, or enraged at the audacity of a person who dared to say the street signage was poor.

In the cop’s mind, this was enough to radio in a “hostile vehicle” call, which prompted eight other officers, a K-9 unit and Homeland Security to arrive.

The cop then demonstrated his ignorance of the law by saying, “I don’t want you videotaping me, and it’s against the law.”

Of course, as we know, filming things that are plainly visible from public spaces is everyone’s right.

At this point, another officer approaches and tells him, “Just write it real quick,” referring to the parking ticket. He must have seen the embarrassment developing and was trying to put a quick end to the situation.

But Mr. Authoritarian was having none of it. As the driver exited the vehicle, she gave the phone to her friend to continue filming. The officer marches around the car and begins saying, “Miss, unless you turn off the recording device…”

He must have finally realized his folly, so he switches to “Can you please turn off the recording device?” repeating the question in several different intonations.

The irrational cop could have saved a lot of embarrassment, and the cost of calling for backup, by simply performing his revenue collection duty and moving on.