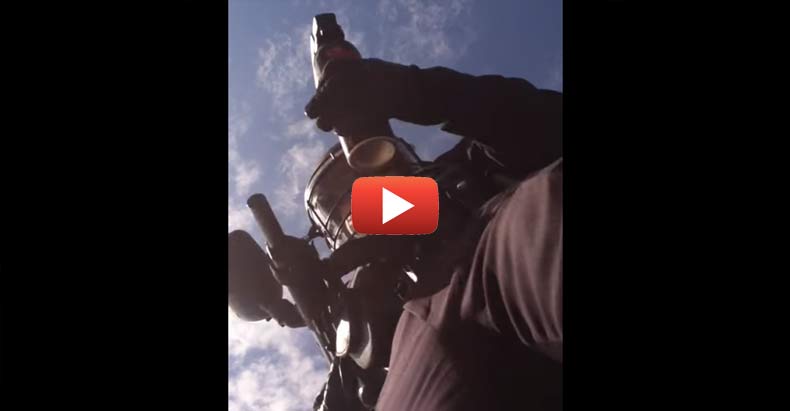 Amherst, MA– University of Massachusetts Amherst student, Thomas Donovan, who is majoring in legal studies and had planned to become a Massachusetts State Trooper, has filed a lawsuit alleging his civil rights were violated after he was pepper sprayed, assaulted, and arrested for filming police brutality.

The officer also repeatedly stomped on his cellphone in an attempt to destroy the evidence and cover up the crime- but the video survived.

The incident took place last March during his neighborhood’s Blarney Blowout parties, an annual tradition attended by thousands and held the weekend before St. Patrick’s Day where Amherst and neighboring towns are full of informal St. Patrick’s Day drinking and festivities.

Last year saw 58 people arrested, 21 of which were UMass students after police in riot gear violently moved in.

During the commotion, Donovan noticed an officer using excessive force while making an arrest, so the student pulled out his cell phone to exercise his First Amendment right to film the incident. Donovan was on the other side of a fence, a safe distance away, and was not interfering with the brutality at all. At this point. an officer wearing full riot gear and carrying a pepper-ball gun— believed to be Officer Andrew Hulse—approached Mr. Donovan to prevent him from filming, the lawsuit states.

Despite the police intimidation, Donovan did not stop filming. He was then pepper-sprayed at close range by another officer. Donovan requested the officer’s name and badge number, but the officer would not identify himself.

Moments later, Officer Jesus Arocho knocked the phone out of his hand and threw him to the ground face first. The phone landed flat on the ground with the camera pointed up and continuing to film.

“Arocho, assisted by Defendant Andrew Hulse, placed Mr. Donovan under arrest. Meanwhile, Mr. Donovan’s phone, which had landed on the ground with the camera facingup, continued to film. It captured the actions of another police officer, Defendant John Doe 3, who walked over to the phone, stood over it, then stomped on it with his boot, several times, in an unsuccessful effort to destroy it.” the lawsuit continued.

Thankfully, Donovan’s phone was inside a shock-resistant protective case and the phone was unharmed. The video, and evidence of this blatant misconduct, was preserved.

Arocho then arrested Donovan on bogus charges of “disorderly conduct” and for “riot, failure to disperse.” These charges were ultimately dropped.

Arocho lied in his police report, stating Donovan was pepper sprayed “as he began to close the distance between himself and the officers.” The complaint points out that this claim is blatantly false as the incident was captured on video.

Donovan ended up spending 5 to 6 hours in a cell, falsely imprisoned, and was denied any assistance removing the pepper spray from his eyes.

Due to the officer’s insane actions, Donovan was suspended from the university, until he contested and won after he was found not to have committed any wrong-doing.

“Defendants knew that it was wrong to stop a civilian from filming police officers in public when the civilian did not interfere with police activity.

Defendants knew that it was wrong to use force against a civilian for filming police officers in public when the civilian did not interfere with police activity.

Defendants knew that it was wrong to arrest a civilian for filming police officers in public when the civilian did not interfere with police activity.

Defendants knew that it was wrong to try to destroy a civilian’s phone merely because it contained video of police officers performing their duties in public.” the complaint asserts.

This year’s Blarney Blowout parties are expected to begin on March 7, but students will be prohibited from hosting guests who are not UMass Amherst students. The University will also be offering “school sanctioned” events this year to monitor the amount of fun being had.

Perhaps a more reasonable course of action would have been to have the militarized police stand down and not bring violence and chaos to celebrations.