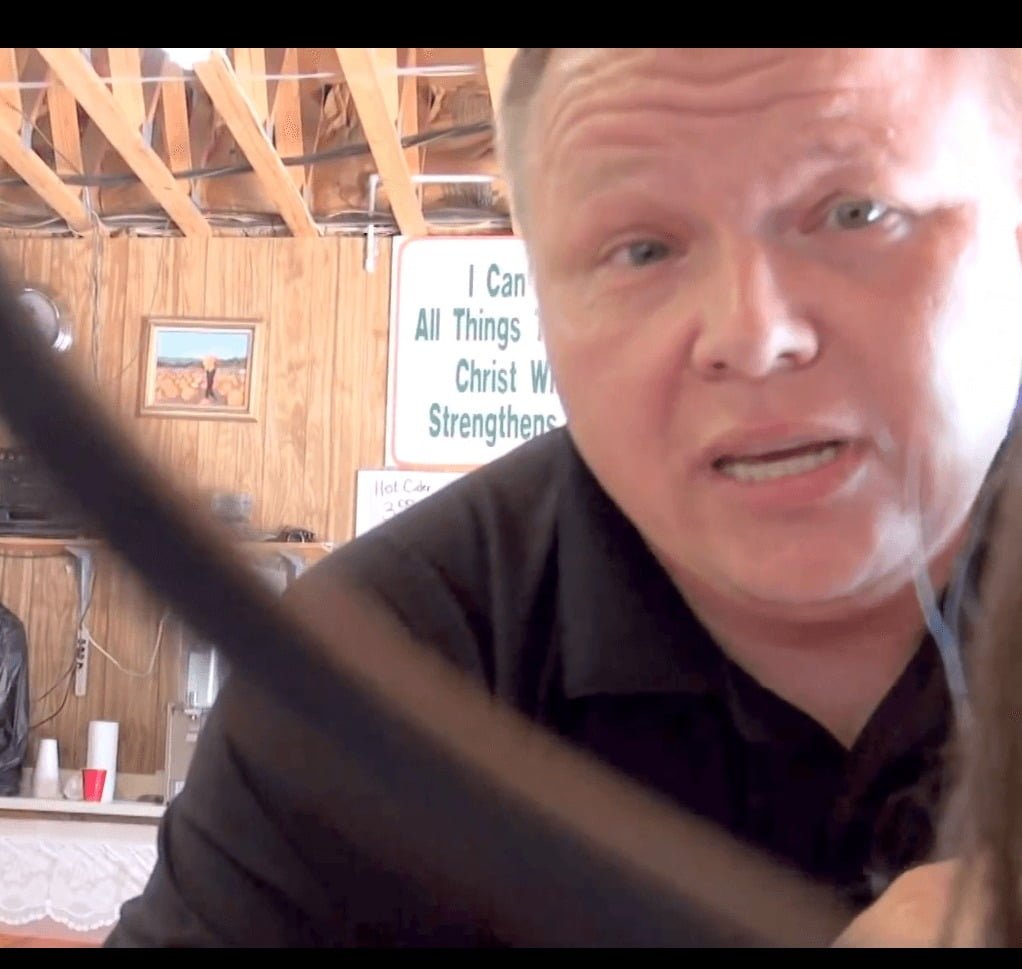 There are so many disturbing aspects to this story. An off-duty deputy manhandled a female citizen journalist and slammed her against a table. She still has bruises and pain a week later. He also presses his body into hers while he held her at the table which must have been simply awful.This happened at a PUBLIC political rally in Dawson County, GA at Burts’s farm. No one else was told not to record. The thug officer that grabbed then slammed the woman refused to identify himself or even acknowledge he was an officer of the law or give his name or badge number. The journalist had permission of Mrs. Burt who owns the farm with her husband. You can hear Mr. Burt claim he rescinded her invitation or rather that was not true. The Atlanta Journal Constitution has a very detailed accounting here. The video journalist had moments earlier been told by attorney general Sam Olens she had won a case to allow video recording at public meetings.

Credit at least goes to the Dawson county GOP Chairwoman Linda Clay Umberger to protest that unwarranted brutality. She was in fact so upset that she had to leave.  Nydia Tisdale, the citizen journalist that was attacked, runs a website called AboutForsyth.com.

This kind of absolute thuggish behavior should sicken everyone in Georgia and indeed the country regardless of your party affiliations. When a bozo politician like Ralph Hudgens embarrasses himself then realizes he is being filmed does not then allow hired tough guys to forcibly remove someone simply because they are recording the speech.

They can ask her to leave but having three men drag and then slam her against a table was beyond excessive. She was not even disruptive, she was asked to leave because she was recording the speech! Don’t you love the way crooked cops can justify resisting arrest even when they have no reason to arrest you in the first place. How can it be resisting arrest when the goon dragged her off caveman-style without identifying himself as a law-enforcement officer? And why are “enforcers” with a badge at a political rally to begin with?

With the exception of Linda Umberger I was also shocked no one else tried to object to this senseless brutality. On Thursday,  Atlanta station, WGCL, reported that Tisdale is facing a felony charge of obstructing an officer. The Dawson County Sheriff’s Office said Tisdale attacked the official, who was identified as Capt. Tony Wooten, while he was trying to arrest her. On Sunday, the Gainesville Times newspaper reported that Wooten had been cleared of any wrongdoing. Dawson County Sheriff Billy Carlisle said that an internal probe found that Wooten had followed protocol in arresting Tisdale. Go figure.

She would have probably been fine if she had brought a gun to the rally instead of a video camera. Trackers from both parties frequently attend event trying to catch politicians saying something stupid and this lady doesn’t even appear to be a tract at all but a fellow watchdog blogger. Perhaps a better approach is not to say stupid things instead of manhandling a woman with a camera.

VIDEO: Journalist Roughed Up And Removed From Georgia GOP Event

Deputy placed on leave after woman arrested at political rally

In the event anyone wants to inquire about vacationing or doing business in Dawson:

“To contribute to the enhancement and maintenance of the quality of life for the community.” – Sheriff Carlisle

The violence occurs shortly after 14:00 minutes in the video.

One thought on “Citizen journalist Violently Restrained at Public Event”