Carson’s campaign is kaput: Smart people can be crazy too 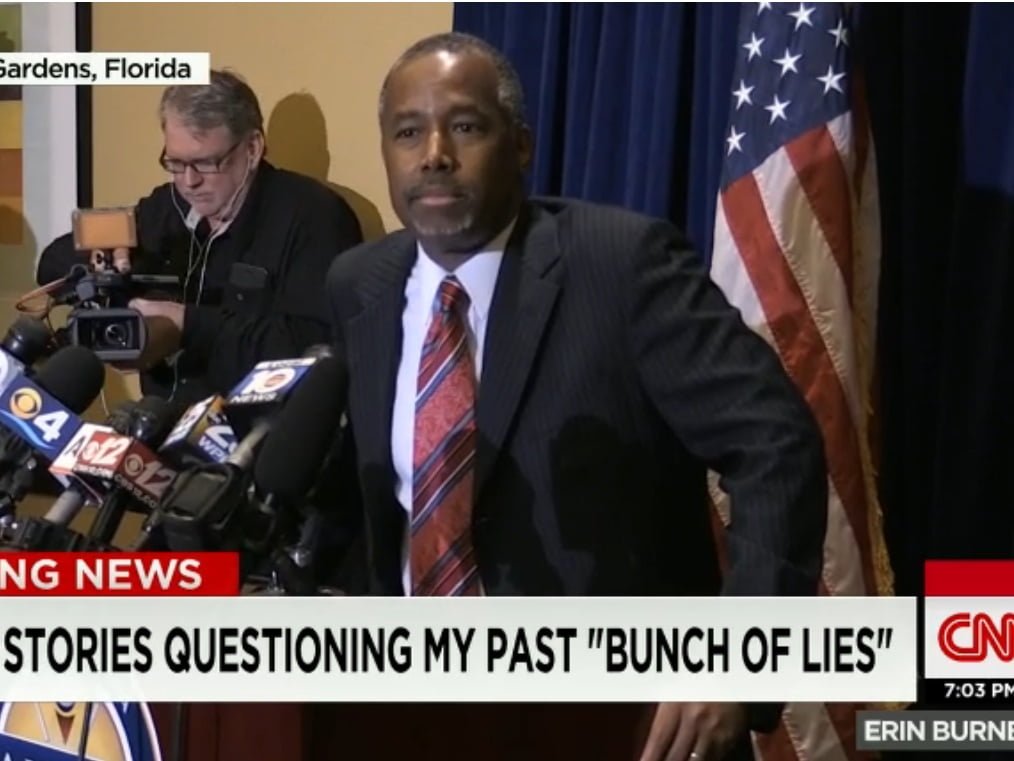 So Long Dr. Ben, we hardly knew ye. I am sure some of his evangelical devotees will continue to stick with him a while longer, but his campaign is for all intents and purposes as dead as the walkers on “The Walking Dead”. But unlike Glen’s death (or fingers crossed near-death. We will all find out Glen’s fate on November 8th ) I doubt too many people will shed a tear when Dr.  Ben eventually drops out of the race. There was always something just a bit “off” about Carson with so many outlandish statements he has made in the past. Here are just a few highlights of the some of his more outrageous comments.

7. The Big Bang is a “fairy tale” and the notion of evolution was encouraged by the devil.

There is no more telling evidence that the “man of science” in the Republican race not only cherry-picks his science to gel with his fundamentalist Christian beliefs, but denies the most basic science out there. While there is no word yet on whether Carson believes in gravity, it’s worth quoting Carson’s insane Big Bang ramblings at some length:

I find the Big Bang really quite fascinating. I mean, here you have all these highfalutin scientists and they’re saying it was this gigantic explosion and everything came into perfect order. Now these are the same scientists that go around touting the second law of thermodynamics, which is entropy, which says that things move toward a state of disorganization. So now you’re gonna have this big explosion and everything becomes perfectly organized and when you ask them about it they say, ‘Well we can explain this, based on probability theory because if there’s enough big explosions, over a long period of time, billions and billions of years, one of them will be the perfect explosion.’ … So I say what you’re telling me is if I blow a hurricane through a junkyard enough times over billions and billions of years, eventually after one of those hurricanes there will be a 747 fully loaded and ready to fly. (Carson adds that the Big Bang is “even more ridiculous” because there is order to the universe.) Well, I mean, it’s even more ridiculous than that ’cause our solar system, not to mention the universe outside of that, is extraordinarily well organized, to the point where we can predict 70 years away when a comet is coming. Now that type of organization to just come out of an explosion? I mean, you want to talk about fairy tales, that is amazing.

10. Charles Darwin was inspired by Satan. “Interestingly enough, this [evolution theory] is a relatively modern science concept,” said Dr. Carson at the conference Celebration of Creation. “Before Darwin came along, it wasn’t.”

“You know, scientists like Sir Isaac Newton – considered one of the most scientific minds ever, inventor of calculus, so many things – had a strong belief in God, big mission outreach,” said Dr. Carson.  “Einstein!  When you think about genius, what is the word you come up with?  Einstein. He believed in God.”

“A lot of people believe in God,” said Carson, “but I personally believe that this theory that Darwin came up with was something that was encouraged by the adversary [Satan].”

12. Says dead bodies preferable to any gun control “Dan, I grew up in the slums of Detroit. I saw plenty of gun violence as a child. Both of my cousins were killed on the streets. As a Doctor, I spent many a night pulling bullets out of bodies. There is no doubt that this senseless violence is breathtaking – but I never saw a body with bullet holes that was more devastating than taking the right to arm ourselves away.”

There is no question he is a very smart man and talented surgeon, but sometimes people can be very smart in one field and really dumb in pretty much everything else. His embarrassing interview on CNN today sealed his fate. There is also the problem that certain smart people become famous and because of that fame and social status they think they know more than experts in other fields. I have no explanation for all Carson’s really weird and ludicrous statements that fly in the face of science, facts, and just commons sense. I also have no explanations for his embellishments or outright lies about West Point and all his other childhood fabrications including the fib about an incidents at Church’s chicken. I do know that right-wing ideologues are often prone to conspiracy theories and are very gullible because of their distrust of what they call “lame-stream” media.

There seems little doubt now that many of his outlandish tales are either completely fabricated or he took a small kernel of truth and added many extra details in the hopes of making it “juicy” to the point that it was complete fantasy after a fashion. There is the additional possibility that he has told these fabricated stories for so long that he actually now believes them to be true himself through self-delusion. Tell a lie often and long enough and it is not impossible you even begin to believe it yourself.

The human memory is really not very good and we can manipulate our own memories. That is why eyewitness reports of crime scenes offer differs vastly depending on who you asked at the scene. In fact 75% of wrongful convictions are a result of unreliable visual memory! I seriously doubt that is the case with all of Dr. Ben’s tall tales but is at least a plausible theory. My personal opinion is that he just wasn’t prepared for the thorough vetting he received as a presidential candidate and has decided to double-down on the yarn he has been spinning. But now that very same yarn that built him up as the darling of the tea party is going to asphyxiate his campaign now that the truth is coming out.

Who knows why Dr. Ben Carson lied. He also was denies getting money from Mannatech which is also a lie. Additionally it appears several sections of his recent book were also plagiarized. There is also another example of him lying about a psychology test at Yale. His reasons for lying may have been intentional or not. It matters not due to all his other whacko statements and simply bizarre beliefs. His monotone almost robotic voice is annoying enough because it makes people almost fall asleep, but mix in a dash of loony tunes with a forked tongue and Dr. Ben’s campaign is now officially kaput….. whether he knows it or not.

2 thoughts on “Carson’s campaign is kaput: Smart people can be crazy too”