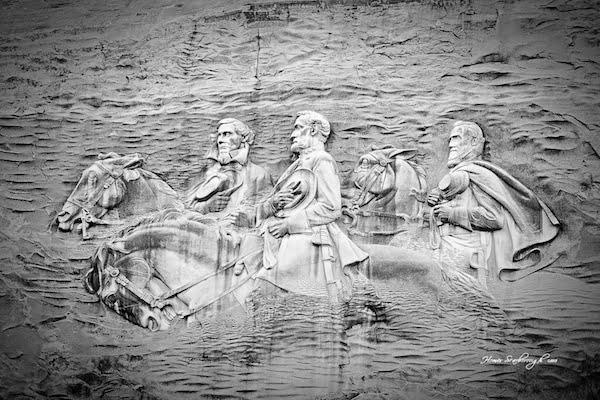 Have we begun the South’s new “Reconstruction” period? This seems to be the intent of Atlanta’s NAACP branch. The organization is calling for the removal of all symbols of the Confederacy from the Stone Mountain Confederate Memorial park, as well as any other state-owned buildings, parks and lands. (We are certain they will follow through on federal lands as well.)

President of the Atlanta Branch of the NAACP, Richard Rose said, “Those guys need to go. They can be sandblasted off, or somebody could carefully remove a slab of that and auction it off to the highest bidder.”

The Confederate Battle Flag needed to go, and that has been done, or is in the process of being done, and Georgia News Online understood why and supported that movement. We understood that the Confederate Battle Flag had been misappropriated by hate mongers, and that when we looked at it and black organizations and its members looked at it, we each emotionally saw something entirely different. Therefore, we agreed, without hesitation, that it had to go.

However, even after all races, black, white, etc., agreed that the Confederate Flag had to go, somehow we suspected it would not end there. Therefore, we are not surprised, although disappointed, that now the black organizations are going after the carving on Stone Mountain which lies in the Stone Mountain Confederate Memorial Park, just as they have previously gone after the Confederate memorial statuary that sits in almost every town Courthouse Square in the state, and, indeed, the South. It was only a matter of time. We feel certain that it will not be much longer before the book and movie of “Gone With the Wind” will be the victim of the present movement of “political correctness” and its goal to “remove all vestiges of the Confederacy and slavery from the land. Is this really the beginning of the new age of “Right Think,” as interpreted by a relatively small group of people?

We suspect the next “icon” to fall will be the beautiful painting and statuary of the Cyclorama’s “Battle of Atlanta” which will likely either be sold into private hands, or placed in a dank dark cellar so that in time the moisture can turn it to rot…. We understand that it is in the process of being moved from Grant’s Park, where it has been for longer than we have been alive, to another location. Would it not be strange if it never arrives at its new location, but, rather, the move provide a good opportunity to dispose of it…quietly? Out of sight, out of mind?

Book burning? Elimination of the articles of historical fact? The substitution of truth for “Right Think,” perhaps? Is “Right Think” going to take the place of our past history with new textbooks and monuments to the virtues of “Right Think. This is the same thing that ISIS is doing at every opportunity with its destruction of historical artifacts in the Middle East (where they had slavery, and we understand still do).

We suspect that there is already legislation being prepared by the legislative counsel’s office to this effect at the request of a Democratic member of the legislature. We have now, strictly because of what happened in Charleston, SC, witnessed the beginning of the implementation of “political correctness” and “Right Think” beyond all bounds, with no line of demarcation, while our streets run wild with gangs, and all respect of others and other people’s opinions go by the wayside. All of this is being done in the name of “making things right.” The world has truly gone mad…. To some, there is no such things as “going too far.”…

Interestingly the movement is led by the NAACP with, we suspect, other groups promoting the well being and, in many cases, the legitimate rights of black people, although we think not in this one, to follow shortly. Of course right up there in lock step are the ultra ultra liberal, guilt ridden faction of white people, who feel that the sins of the father truly falls on the back of the son and so he (or she) must make up for it by paying penance, while adorned in sack cloth and ashes.

We predict that this movement to destroy the monuments of the past, destroying or placing them in hidden corners will be costly politically, as well as emotionally and financially. There are relatively few white Democratic party members in the state house and state senate, and we suspect that there will be less if this continues. We strongly suspect we will see some party switching next year as a result of this new age of “Right Think” being adopted by some of those that identify as Democrats.

There has been no Democratic Governor or U. S. Senator elected from Georgia in quite a few years. As a result of the knee jerk reaction of the NAACP and other organizations to destroy it all, following their success of the Confederate Battle Flag issue in South Carolina and other states, we predict this continuous drive to destroy history will continue the downfall of the Democratic Party in the South, insofar as state and national elections are concerned until such time as the state population is overwhelmingly black, and black voters can take it by the numbers, although not necessarily by the issues.

Sorry folks, that is just the way that it is. This sentiment, however unpopular, does not lose its validity because it is unpopular. We can only hope that the legislature will not buy into the madness. Being primarily Republican, and therefore immune from any form of guilt, be it deserved or not, it may very well not do so, which would be a blessing to all Georgians of whatever race. However, no action, right or wrong, will heal the wounds that have now and are now being opened, much of it by opportunistic “personalities.” These new wounds will be difficult to close. Only the good will of all of us, directed to all, of whatever race, can accomplish that goal.

To think that all of this is the result of one mad and insane Klu Klux Klan loving man in Charleston, SC, coldly taking the lives of a group of people that wanted only peace for themselves and for him. The next 18 months is going to be a wild ride, with much venom spread on all sides before it is over, a mini-civil war, if you will. However, in this one there will be no winner, but, rather, everybody loses. It will be a period that in the years to come we will look back on with regret. A period in which future generations will wonder why we did such a thing….