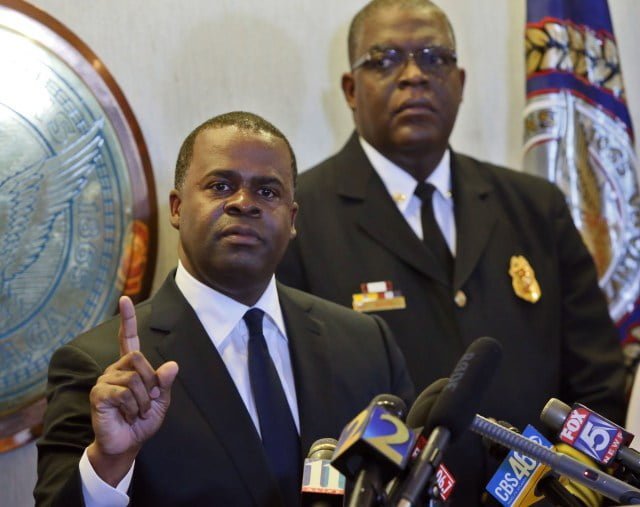 Atlanta Mayor Kasim Reed just fired Chief Kelvin Cochran on Tuesday. Cochran claimed that his PRIORITY (his word) as Fire Chief of the AFD was to “cultivate its culture to the glory of God.”  That right there is his problem.  That was most certainly should not be his priority in that job. If he wants to be a preacher on his own time, that’s fine. But not as Fire Chief.  Kasim Reed did the right thing, this time.

A fire chief’s first priority is the safety of the city he/she is sworn and employed to protect.  It is none of the chief’s business what the employees think or believe in their own time, and it is obviously not in any way his business to create a culture “to the glory of God”.  Would you support a civil servant who wanted to create a culture to the glory of Allah or Budda?  Didn’t think so. How about one that ridiculed and mocked your religious beliefs and called you a pervert? Again, didn’t think so.

Cochran is welcome to think, say, write or believe whatever he wants to in his private life as long as he does not inflict it on other people.  He was happy to take his very generous salary and benefits – remember that big illegal payoff for his unused vacation time? – with money collected in part from gay Atlantans, but he felt that disrespecting his employers was protected because he did so under the cover of the Bible.  He was wrong.  He stepped over the line and became fireable when he “gave” – i.e., inflicted – his book to a wide range of subordinates in the department and disobeyed orders and protocols by not seeking approval for the book or following his gag order while suspended.  As the boss, he knew that was tantamount to making them follow his own beliefs and prejudices, and was far outside the line.

There was also the Fire Chief’s insubordination in holding a news conference after the Mayor had expressly told him not to discuss the matter publicly. Now I would think that was grounds for firing right there alone.

A public employee who couldn’t help exposing his medieval unreason as an avocation has been afforded the liberty to pursue it as his vocation. Now, that’s “religious liberty”! His job was to PUT OUT FIRES….not insult those who were his subordinates. Who cares what his religious beliefs are. The work place is not where you tell others about it!

The mayor said his fire chief had failed to get the formal — and required — city approval necessary before publishing the book. More important, Reed told those gathered at a recent press conference, a man who reported directly to the mayor had not discussed the contents of the book with his boss prior to publication.

“If you work in an organization, you check in with the person who writes your check. That did not happen here,” the mayor said. “I deeply resent the emails and phone calls to my wife, literally calling me an anti-Christ. And I don’t mean one time, or two times. This is what Chief Cochran brought to my door.”

Georgia Religious Liberty Legislation is Anything But

This all comes on the heels of the so-called “religious liberty” legislation which is nothing of the sort. A Tea Party member from Columbus named McKoon first introduced his extreme legislation during the 2014 legislative session. His attempt failed, in large part, due to Georgia-based business leaders like Coca-Cola, Delta, Home Depot, Intercontinental Hotels & UPS stepping up and speaking out for the rights of all citizens.

Now, McKoon and his cohorts are introducing the bill again with a potential compromise that’s just as damaging.

Not only would McKoon and Teasley’s law further protect bosses who distribute books filled with hate speech to taxpayer-funded staff at work, but a restaurateur could deny service to an out-of-wedlock mother. A cop could refuse to intervene in a domestic dispute if his religion allows for husbands beating their wives, and a hotel chain could refuse to rent rooms to Jews, Hindus, or Muslims.

It would allow physicians and nurses to refuse medical care, such as blood transfusions, that they find religiously offensive and allow government employees who adhere to extremist religions to refuse service to a person of a particular race.

Under McKoon and Teasley’s law, even parents who let their children die of malnutrition, abuse or medical neglect would be even more protected —  just so long as they claim that their actions are justified by a “deeply held religious belief.”

The New York Times just published a great editorial called God, Gays, and the Atlanta Fire Chief I will end this article with a small snippet from their article which I think sums it up very nicely.

The First Amendment already protects religious freedom. Nobody can tell Mr. Cochran what he can or cannot believe. If he wants to work as a public official, however, he may not foist his religious views on other city employees who have the right to a boss who does not speak of them as second-class citizens.