Will ‘security moms’ shift women voters away from Democrats? 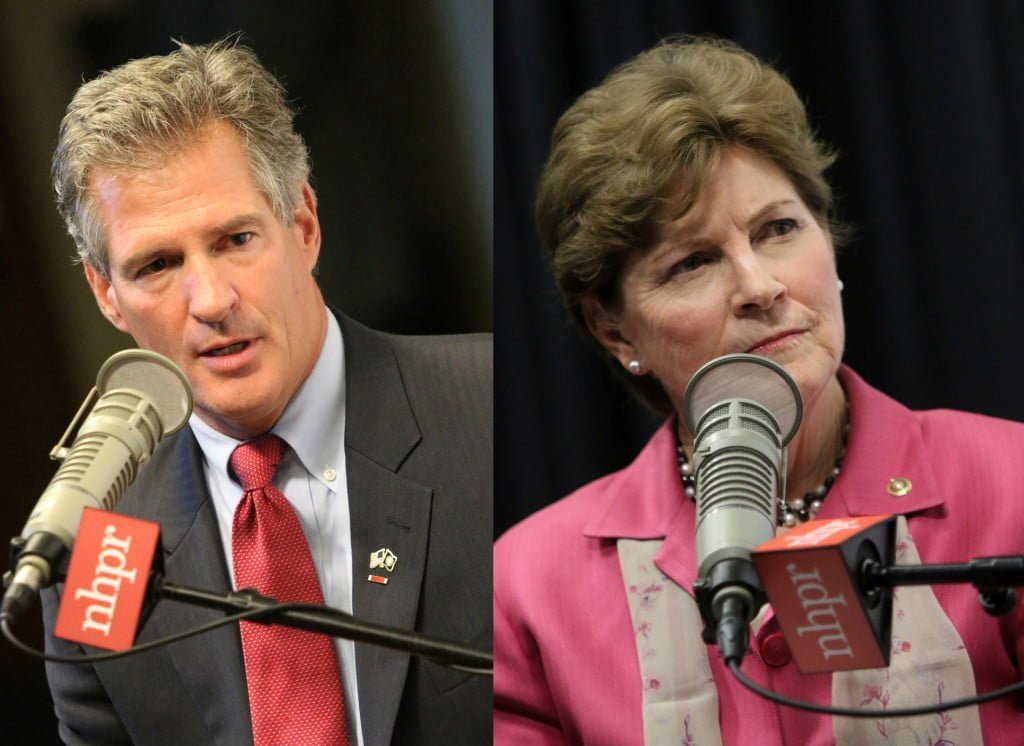 Democratic Senator Jeanne Shaheen and Republican challenger Scott Brown are in a tight race in New Hampshire, where women voters will likely choose the victor. Photos from NHPR

Editor’s note: In many closely-watched U.S. Senate races this fall, women are being courted as a key voting block. Traditionally, Democrats have exploited the gender gap, by appealing to so-called “soccer moms” on social and economic issues. But this year, Republicans think they have a chance of narrowing that gap by appealing to “security moms” — women who are concerned about national security issues in the face of escalating conflicts and terrorism abroad. Fred Bever of New Hampshire Public Radio reports on how that’s playing out in the race between Democratic Senator Jeanne Shaheen and Republican challenger Scott Brown.

Democratic Senator Jeanne Shaheen is making a big push for the women’s vote, which for three decades has tilted toward her party. But this year, GOP challenger Scott Brown is trying to exploit what may be a new vulnerability for Democratic candidates – women’s disenchantment with the way President Obama is handling the threat of the so-called Islamic State.

The race could come down to what’s highest on women’s minds come election day – social and economic issues such as abortion and pay equity, or… national security.

At what was billed, somewhat generically, as a “women’s event” in Exeter last week, Jeanne Shaheen made clear who she believes will make the difference in what is shaping up to be a tightening race.

Shaheen listed the issues which she says will win the women’s vote: her support for pay equity, for abortion rights, even, from back when she was governor, funding she pushed for kindergarten. And in response to a question from her mostly female audience, she focused on one particular group that reliably votes Democratic… yet isn’t so reliable about actually showing up at the polls in years, such as this one, that do not feature a presidential election.

“It’s those unmarried women, those non-college educated women who we need to make sure come out and vote. And we need to let them know what’s at stake in this election,” she said.

Recent voter surveys demonstrate why Shaheen might be anxious to reach such voters. They put Brown even with her – or within striking distance among voters in general. But they also found that women favored Shaheen by better than 10 percentage points – one poll released today giver her an edge of more than 20 points among women.

That’s “the gender gap.” First observed at the national level in the 1980s, the gender gap tends to favor Democrats, and it could be pretty hard for Brown to overcome.

Concord resident Joellen Isabelle is a Shaheen supporter, and a supporter of abortion rights. She provides a pithy sum-up of why the gender gap could be hard for Brown to overcome.

Isabelle’s support for Shaheen does go beyond simple anatomy. She says Shaheen will do a better job protecting women’s access to contraception, to health care, and funding for mental health treatment. And she doesn’t trust Republicans with a budget, either.

But with a race that conceivably could be decided by a percentage point or two – fewer than 10,000 votes — it’s worth Brown’s time to try to narrow the gender gap. Last week he released an online ad, titled “Women for Brown”.

Kelly Ayotte, New Hampshire’s Republican Senator appears in the ad and says, “You know I’m the mother of a nine-year-old and a six year old and I support Scott Brown…”

Ayotte obliterated the gender gap four years ago, when she handily beat her male Democratic opponent, Paul Hodes. She was favored by 55 percent of women. (Although it is worth noting that women with no children at home were one of the few groups that stuck with the Democrat – the kind of voter Shaheen wants to make sure turns out this year.)

And while Ayotte may help Brown bridge the gap, he appears to be working another angle too: women’s unhappiness with President Obama’s foreign policy, unhappiness that’s beginning to show up in national surveys.

“We saw this phenomenon back in 2004, with what was known as the security moms,” said Patrick Murray, who directs the Polling Institute at Monmouth University

Murray says what happened to John Kerry in 2004 is hurting President Obama now: The president’s getting increasingly negative reviews from women who are concerned about the threat posed by Islamic radicals abroad. Murray’s watching three close Senate races, including New Hampshire’s, which pit a Democratic woman against a Republican man.

“The Republican is looking at a fairly close race, the ability to catch up, but the Democratic nominee has a double-digit lead among women,” Murray said. “And the question is how do you cut into that lead and it appears that they are going to use this terrorism scar.”

Here’s a salvo from Brown – one of many he’s launched in personal appearances and through advertising. His ad begins: “Radical Islamic terrorists are threatening to cause the collapse of our country. President Obama and Senator Shaheen seem confused about the nature of this threat. Not me.”

“They are using a language that has subtle gender clues – ‘confused, soft, turning a blind eye.’…It’s all about turning these women voters against their fellow-women who are running for Senate.”Pollster Patrick Murray says ads like that here and in other battleground states, such as North Carolina and Georgia, feature words and phrases specifically tailored to undermine the Democratic candidates’ credibility, based on their gender.

“They are using a language that has subtle gender clues – ‘confused, soft, turning a blind eye.’ Things that they hope will play into prejudices about a woman not being able to be a strong leader or take decisive action,” Murray said. “It’s all about turning these women voters against their fellow-women who are running for Senate.”

And whether it’s a reflection of national trends, a response to Brown’s campaigning, or a direct response to Shaheen’s senate record, there are women in New Hampshire, women like Amie Lupabngo, who voted for her in the past, who are voting for Brown this time.

“I voted for her, but I’m changing my mind about that,” Lupango said. She says she agrees with Brown on the need to secure the country’s borders. And she’s worried about the way Obama is handling the Islamic State.

“He’s dilly-dallying on his response to them, and he’s just not responding aggressively,” Lupango said.

The tug-of-war over women’s votes continues this week. Jeanne Shaheen on Monday named her women’s PR campaign “A Senator New Hampshire Women Can Trust.” And on the other side, a super PAC headed by national security hawk John Bolton, the former U.N. Ambassador, has filed papers showing he is buying some quarter million dollars’ worth of ads to support Scott Brown.

The post Will ‘security moms’ shift women voters away from Democrats? appeared first on PBS NewsHour.