Will Ms. Lindseybelle Graham Declare For the Presidency? 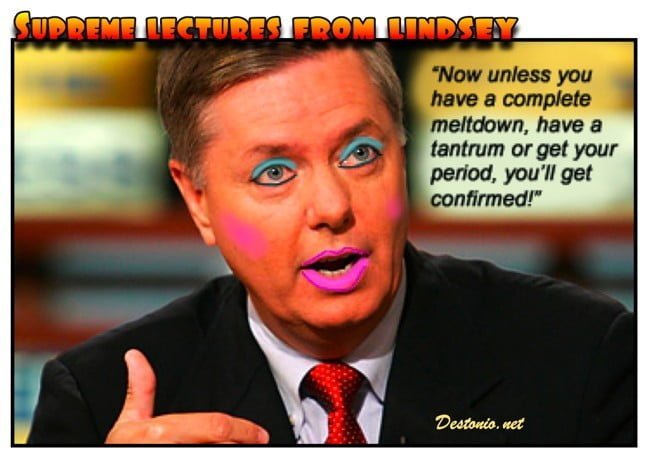 In a recent humorous article by Shane Paulson on the National Report , it was a bit heavy on the sexual innuendo to the point that it crossed innuendo and became a smoking gun with a very sizable muzzle flash.

The writer continues with this jewel.

“Senator Cotton, 37, author of the infamous open letter to Iran, may be the perfect candidate to help Governor Walker “Bone Up” as President Obama recently said, on his foreign policy knowledge.”

But the author didn’t stop there….

“A veteran of the United States Armed Forces, the Arkansas Senator has the background, the resume, and most importantly, the ability to stimulate conservatives and arouse curiosity with Independent voters.”

“This past winter, the Wisconsin Governor invited the young Senator out on an ice fishing trip to northern Wisconsin. According to their fishing guide Bob Neilson, the two spent over an hour picking out matching outfits and shining each other’s poles before heading out on the lake. “

That hoax article gave me an idea for another Republican who I think needs some love and attention. I actually hope Ms. Lindsey will run for President because I can’t wait to see all the skits Jon Stewart would surely come up with in his terribly bad but funny Blanch DuBois accent.

I bet Lindsey Graham came down with an “unexplained” case of the vapors when he read that article about Senator Cotton and Governor Walker.  She’s having to steady herself against the balustrade at this very moment. A lace hanky dangles precariously from those impossibly pale fingers of hers so often used to wag at handsome strangers.

Ms. Lindsey is just so overcome with a desire to declare war that she is close to a feinting spell if that mean old president won’t oblige her soon.  Of course the real reason Ms. Lindsey is so anxious to start a war is because she really likes to have her borders invaded. Again, and again, and AGAIN!

A new war would also make her BFF John McCain very happy since chasing kids off his wife’s lawn is becoming tiresome and he just doesn’t have the energy or the passion to take care of the lawn like he once did.

Somewhere a clock chimes…It must be nigh on 10 o’clock and that handsome young gentleman caller Paul Ryan is due any minute! “I swear I must look a terrible fright in this old muslin suit” Mammy hurry up now and fetch me something proper to put on. I think I will wear the blue bombazine to match Mr. Ryan’s eyes and pot rouge on my delicate cheeks. I hope Paul is pleased as punch.

Heavens to betsy…What am I to do with all these handsome young senators and governors vying for my attention.

Mammy, I feel the vapors coming ….bring me a mint julep and the fan.

Come out of the closet Lindsey. You aren’t really fooling as many people as you think you are. 😎

Here are just a few that deserve mention.

Steve Wiles – North Carolina Republican Senate candidate Steve Wiles campaigned heavily on his anti-gay beliefs and his support of the state’s same sex marriage ban. However, in May 2014, news broke that just over a decade ago, he worked as an openly gay drag queen and drag-show emcee at Club Odyssey, a gay-friendly Winston-Salem lounge.

George Rekers, a man who helped start one of the most powerful anti-gay lobbying groups in the U.S. during the 80s and has written published papers such as “Growing Up Straight: What Families Should Know About Homosexuality,” had a recent surgery, so during a lecture tour when he was unable to lift his own luggage, he hired some help – which is perfectly reasonable.

Georgia Pastor Eddie Long is a Baptist and famed televangelist in his area. In 2004, he led a march to Dr. Martin Luther King’s grave in the name of defining marriage as between a man and a woman. He has also been quoted as saying that his church can “deliver” people from homosexuality. He is currently being sued by four young men (ages 21, 20, 23, and 22) for using his fame and influence to coerce them into sexual relationships. The relationships lasted months and occurred during the boys’ late teens. The age of consent in Georgia is 16, so it was legal, but it was still wrong of him to use his power to get the boys to do sexual favors for him.

Alabama Attorney General Troy King, plays itself out in beautiful symmetry. Known for his vocal opposition to gay rights and for his attempt to outlaw sex toys, King was caught by his wife while having sex with a local homecoming King (see what we did there?) from – wait for it –Troy University.

Known as Pastor Ted to his congregation at New Life Church in Colorado Springs, Colorado, Ted Haggard was outed by prostitute and professional masseur, Mike Jones, in November 2006 for paying him to engage in sex with him for three years.

Former Idaho Republican, Larry Craig, who served 18 years in the U.S. Senate, supported the Federal Marriage Amendment, which banned marriage rights to same-sex couples and has a 0 rating from the Human Rights Campaign group. His rating for lewd conduct, however, was raging high when he was arrested at the Minneapolis-St. Paul International Airport on June 11, 2007 for cottaging an undercover police officer.

Mark Foley -A man formerly in charge of the House Caucus on Missing and Exploited Children (which dealt with legislation protecting Americans against sexual predators, and made stricter guidelines for tracking them) was caught having unlawful Internet conversations via IM and email with two former pages (aged 16 and 18… oh, the irony).

Phillip Hinkle -The Indiana State Representative, who voted to pass a constitutional amendment defining marriage as solely something between a man and a woman, was caught trying to bribe an 18-year-old male teen he met on Craigslist for sexual favors.

Feel free to add more in the comments as there is no shortage of self-hating closeted gay Republicans.  And yes, I realized the National Report article I linked at the top was a spoof in case you are wondering.

One thought on “Will Ms. Lindseybelle Graham Declare For the Presidency?”