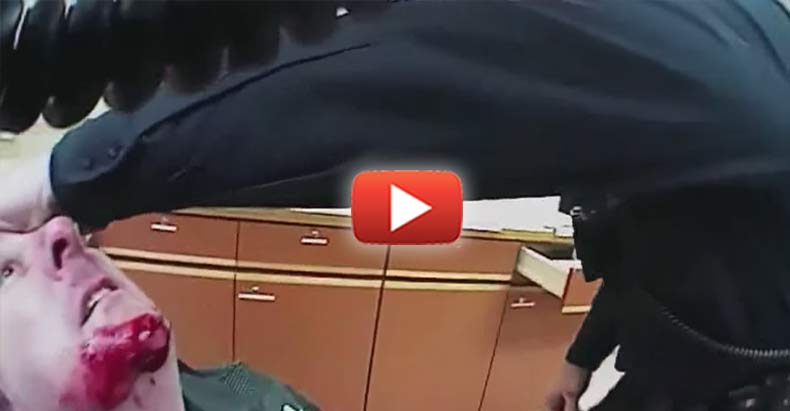 Federal Heights, CO — Officer Mark Magness is no stranger to police brutality. In 2009, after being on the Federal Heights police department for a year, Magness was convicted of misdemeanor assault after he broke an innocent man’s arm while investigating the popping of illegal fireworks.

Despite pleading guilty to assault, Magness was never fired.

Now, 6 years later, we are witnessing the horrid negligence of this department for allowing a monster like Magness to remain in a position of power.

The 9 minute and 30-second long video begins as Magness yanks the handcuffed man from the car and smashes his face into the wall. The man immediately starts bleeding profusely from the mouth.

“Stand up!” yells Magness to the man he just threw down. In the background, the man can be heard apologizing as he’s thrown around like a ragdoll.

The man, who is now fairly agitated after being assaulted while in handcuffs is thrown into the cell. He then makes a mistake and raises his open hand toward Magness.

At this point, Magness jumps on the man and begins pummeled him. Magness, knowing that his body camera is recording this abuse, continues to yell out, “Stop Resisting!” throughout the abuse in an attempt to justify his torturous ways.

One of the officers points at Magness’ chest in an apparent attempt to warn this maniac that his actions are being recorded. “F**k that! F**k that!” yells Magness as to imply that he has no intentions of stopping this assault, regardless of being recorded.

The man, who is now in handcuffs again, is thrown into a restraint chair by Magness, again apologizing the entire time.

“I don’t care, strap him to the chair,” Magness replies.

Then the man yells “ow!” as Magness gouges his temple. Magness replies, “no this is ‘ow,’” as he jams his finger underneath the man’s ear.

What the man was being arrested for and the totality of his injuries were not released by the department.

However, court records show that on June 17, Magness pleaded guilty to attempted third-degree assault for this attack which happened in December.

Magness’ status with the Federal Heights police department has yet to be released publicly.