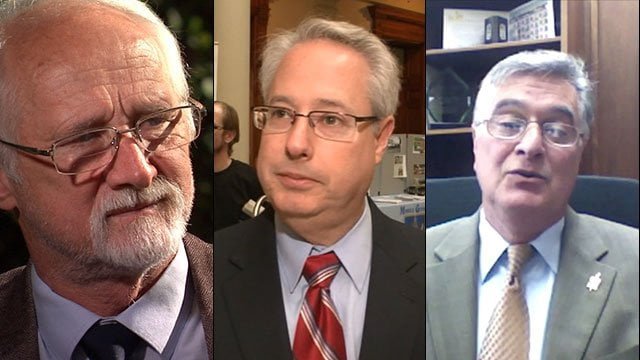 Special thanks to Channel 4 NBC Atlanta, and CBS Channel 46 Atlanta for this special watchdog report

The lawsuit alleged University System of Georgia officials and GPC budget officials colluded to falsify budget reports to frame Tricoli and that Attorney General Sam Olens is protecting them.

At a news conference Monday, a representative of Georgia Watchdogs drew parallels between Tricoli’s case and the lawsuit brought by the former head of the state’s ethics commission, Stacey Kalberman, who won a whistleblower lawsuit for being unfairly forced from her job as retribution for investigating Gov. Nathan Deal’s  campaign.

“This is coming on the heels of the Ethics Commission lawsuit in which Georgia taxpayers ended up having to pay over $3 million because of wrongdoing by state employees,” said Sabrina Smith.

Judge Daniel Coursey will consider the arguments from both sides. It’s unclear when he will announce a decision.

Tricoli, who says he was framed for financial mismanagement and forced out of his job, said the allegations against him have destroyed his career.

“At 56 years old, I was basically black-balled thanks to the USG (University System of Georgia) and their decision to eliminate me and keep all of this on my shoulders when in fact I was the person who the crime was committed on.”

The office of attorney general is constitutionally required to prosecute public corruption within government and defend state agencies in litigation.

When asked why the office had not investigated the allegations, Olens’ spokesperson Lauren Kane said “[n]either Benedek nor Tricoli have made any credible allegations that warrant action by this office.”

“I think this is corruption on a level I can’t even quantify,” Benedek told CBS46 investigative reporter Jeff Chirico during an interview in 2013. “The [UGA] administration reserves the right to cheat and lie and do whatever they please.”

Benedek survived an attempt by UGA administration to revoke his tenure in 2010. According to his lawsuit, a dean manufactured evidence to frame Benedek. In doing so, the lawsuit alleges he shared private student information with a third party.

The lawsuit, which is filed in Fulton County Superior Court, goes on to allege an assistant attorney general who prosecuted the tenure revocation withheld evidence that disproved a major allegation in her case. She’s accused of moving forward with the hearing anyway, telling witnesses their lies would be protected by sovereign immunity.

A panel ruled that Benedek could keep his job but Benedek said the accusations have ruined his reputation. He wants to clear his name by proving university officials conspired to oust him because he openly and regularly criticized the university administration.

“[The attorney general and university administration] attempted to take away [Benedek’s] job, take away his pension, destroy his life and livelihood based on charges they knew were false,” said attorney Stephen Humphreys, who represents both Benedek and Tricoli.

Tricoli claimed he was forced from his job over false financial mismanagement allegations.

Tricoli’s lawsuit contends finance officials manipulated the college budget to frame him. The budget director allegedly told Tricoli GPC’s budget had a surplus while telling the Board of Regents officials that GPC was “careening…into the red.”

It goes on to allege that Rob Watts, USG Chief Operating Officer and Two-Year College Sector Head, withheld budget information from Tricoli “in order to bring about Tricoli’s demise.” Watts assumed Tricoli’s position after he left in 2012 and currently still serves as interim GPC president.

Humphreys said Olens should have investigated the cases instead of defending them.

Olens’ court filings don’t dispute facts in the two complaints but has requested that the court dismiss the complaints because state workers are immune from civil lawsuits.

It is still not clear how Olens’ office determined the allegations didn’t warrant an investigation.