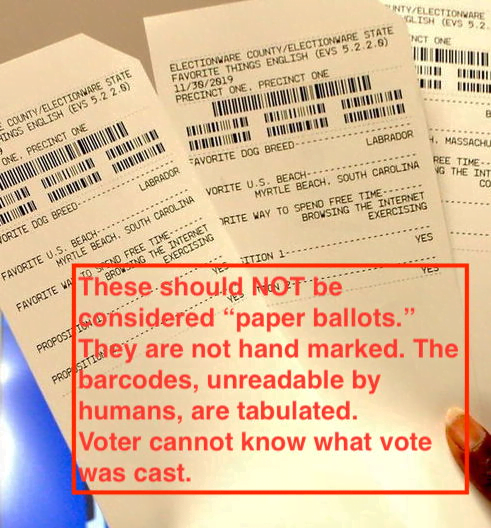 The following article is a Twitter thread converted into an article with the permission of the author Marilyn Marks. It covers the sneaky attempts by politicians to delay using paper ballots with Senate Bill 403. Ms. Marks is a Republican election integrity activist as well as an expert on voting procedures and vendor influence.

GA voters—never forget how @ and @buzzbrockway misled lawmakers and public to push through their barcode balloting bill #SB403 by claiming that it was needed to “make paper ballots legal!” And “simply create a committee. Nothing more!”

Setzler claimed at the podium that he was merely making paper ballots “legal” in Georgia, never mind that paper ballots have been legal since 1777. For 241 years. Rep. Setzler, check out old Article IX.

Buzz Brockway had tweeted hours before the close of session that his amendment “replaced” the bill with a study commission. Sounded safe enough. Some activists were relieved, but others, less trusting, sent me photos of the purported “study commission only” bill to review.

Nine (!) of the 11 pages of the purported “study commission bill” were provisions to permit the immediate implementation of electronic ballot marking–barcode balloting. See for yourself.

I challenged Buzz Brockway on Twitter about his claim that his amendment REPLACED the bill contents with a study commission. Not happy that he was caught in a lie, he attacked my credibility, because I wasn’t “in Georgia.” (Pro tip–Tarheels read, too. We even have internet!)

Still maintaining guise of “it’s just a study commission bill,” sponsors asked for a YES vote in House at 10:45 pm. No member (D or R) rose to object. No member would debate. The Dems declined to give their minority report. No one would go on the record with the truth.

“AYES” had it. 112 to 60! See how your rep voted. Reps “not understanding the bill” is NO EXCUSE. These are your fundamental voting rights they are choosing not to understand!

Vendors must have been dancing in the Capitol lobby at 10:50pm when barcode balloting bill #SB403 was being transferred from the House to the Senate for a pre-midnight vote.
After all, only one week before, the feds allocated $10.3 million to GA for upgrading election security. And the vendors and sponsors don’t want paper ballots that voters demand, but instead, the expensive barcode balloting and want it NOW.

Things needed to happen for $10M of barcode machines to be purchased immediately–1) change the definition of “official ballot” to include barcode balloting; 2) change the law that all voting equipment be uniform, 3) change law that SOS provide machines to ALL counties.

Shocker–the “study commission only” bill accomplished ALL three things in the 9 pages of text about electronic ballot markers. #SB403 obviously did not “make paper ballots legal” in GA, given that they have been legal since 1777.

Would Senate cave in to such nonsense too, when bill sponsor Bruce Thompson was sure to continue to embrace vendors’ demands to force barcode balloting into the law, and ask for the “yes” vote? After all, he lied about it in House Rules Comm earlier.

Now for the mystery. In the last hour of the session, after #SB403 made it to the Senate, it did not come up for a Senate floor vote. Someone spiked it. Why? Will the media investigate? After all, the Senate had voted for the full version 50-1 in February.

Citizen activists who fought relentlessly against the bill celebrated a hard earned and unusual victory over a vendor-driven bill, #SB403 as the gavel came down.But citizens are left to wonder about the vendors, the sponsors, the silence of the minority, and the motives behind this underhanded attempt to double down on more unverifiable, un-auditable voting.

As Buzz Brockway runs for Sec. of State, voters & press must demand answers about this sordid affair. As Bruce Thompson and Ed Seltzer run for re-election, they need to come clean on this. This is not a partisan attack. (I am a Republican, but NOT a happy one!!   😡 )

This experience proves that citizens voices CAN be heard if they are relentless and insistent and call on friends across the nation for help locally. Thanks for all the hard work of those who worked the halls of the Capitol and those who messaged from afar!