Cosmetic surgery can be a Symptom of Psychological Issues 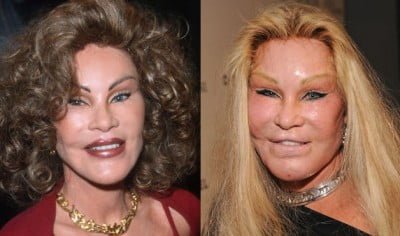 This inspiration for this article came from a TV commercial I was just watching while having dinner that featured Marie Osmond for Nutri Systems. At first I wasn’t quite sure who it was. Not only had her lips

grown, but it appeared she had a lot of other work done as well. In the TV ad she said she had recently lost 50 lbs. As a person currently struggling with weight loss myself,  hats off for that accomplishment because losing weight is tough. But why do certain people and most notably celebrities choose to go to such extremes that it almost gives them a clownish appearance. That I simply could not understand. It reminds me of those candy wax lips I used to buy as a kid.

I understand the desire of people at all ages to try and look their best. But do the people that get things cut, nipped, tucked, augmented, and twisted beyond actual recognition honestly believe these expensive surgeries are an improvement?

I am not against all plastic surgery. Certainly for many people  that suffer from serious burns, skin cancer, and many other medical issues it can allow them to live normal lives again. I am not even against cosmetic surgery to try and shave off a few years. That boost in confidence and self-esteem might make them happier at least for a while if they can limit it to minor things that does not drastically alter their appearance. The old adage that sometimes less is more would seem rather apropos to lip augmentation at a certain point however.

I imagine some of these people likely suffer from something known as body dysmorphic disorder or simply BDD for short.  This is a mental illness that gives people a distorted or exaggerated view of their body. They might fixate on flaws that other people might not even notice and become obsessive about hiding or fixing their perceived flaw and view surgery as their only remedy.

Signs can include constant mirror checking, constantly asking for reassurance that they look OK, trying to hide their flaw, and a strong insistence that they are correct about their flaws regardless of overwhelming evidence to the contrary. I have a great deal of sympathy and compassion for anyone with a mental disorder like BDD so it is not my intention to make fun or light of these people. I have no idea if Marie Osmond or any other of the famous celebrities that choose to mutilate their faces and often their bodies as well suffer from BDD. For anyone considering plastic surgery please do yourself a favor and make sure you do not suffer from BDD before your surgery and not after. Because if that is the case your money would be far better spent seeing a competent psychologist or psychiatrist as opposed to a plastic surgeon. No matter how many surgeries a person with BDD has, it will never be enough. That feeling of a flaw will not go away with surgery. It certainly is not limited to women either.

If you have a friend or family member that shows signs of BDD, please do not encourage plastic surgery since you will likely make the problem worse by agreeing with their sense they are flawed and instead try and get them into see a therapist instead. Here is a gallery of some plastic surgeries gone wrong. It is not meant to mock but simply educate and serve as a warning.

For people that do not suffer from BDD and still choose to simply mutilate themselves you would get a lot more bang for your buck with enough sleep, a healthy diet, exercise, and to keep your skin looking years younger simple acid peels can work wonders and can now be bought from Amazon. Do those common sense things and not only will you look younger you will also feel younger and likely live far longer as well. Sometimes people simply have far more money than sense.