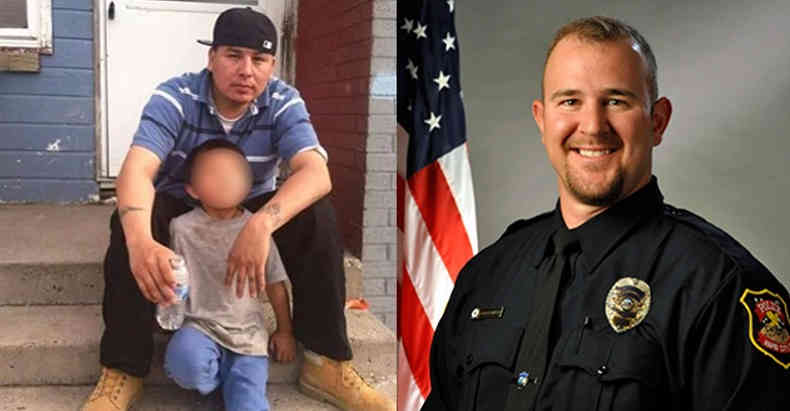 Rapid City, North Dakota – This Saturday evening, 30-year-old Allen Locke was shot and killed by police, just one day after attending a protest against police brutality. Locke is a Native-American man who attended a #NativeLivesMatter rally that was being held locally, according to his family.

The police claim that Locke charged the officer who shot him with a knife, however, this cover story is often used by corrupt cops when they kill someone, and the police have not yet put forward any evidence to verify their claims.

It was reported by Indian Country Today, that Locke was shot roughly five times, possibly more, and was pronounced dead at the scene when an ambulance eventually showed up.

The name of the officer responsible for the shooting is Anthony Meirose, and it is not clear whether he had any knowlege of Locke’s involvement in police accountability activism. However, Police Captain Dan Rud did say that ” Locke is no stranger to the Rapid City Police Department,” but did not elaborate any further about the prior interactions that Locke had with the local police.

On Monday, Locke’s family released a statement saying that that there are details that have not been made public through the media, but they will be waiting until after the funeral services and grieving process to re-engage with the fight against the police state.

The statement read in full:

In light of the recent tragic events that have transpired at Lakota Homes and that have claimed the life of our son, brother, father, partner, grandson, uncle and loved one, we feel it imperative to issue a public statement asking the Rapid City and Native community at-large to bear with us as we grieve our loss and make arrangements for our loved one.

We genuinely appreciate the prayer vigils and ceremony circles that are being organized in Allen’s memory; this is a crucial time for our family as Allen is making his spirit journey.

We feel the community’s hurt; we know you are angry, we know you are sad and we know everyone is on edge as a result of Allen’s violent death coming off the heals of his participation in the #NativeLivesMatter Anti-Police Brutality Rally and March a day before this horrific incident. There are many details that we will share in time but we are trying very hard to hold it together and to be strong and peaceful in order to send our loved one off and to give our children an appropriate holiday’s memory.

We ask that everyone respect the families privacy at this time. There are critical issues currently pending including an autopsy, internal investigation, a meeting with the Mayor and Rapid City Police Chief and a prayer gathering outside the mayor’s office during that meeting at 10am MST, Monday, Dec. 22, 2014.

Allen was many things to many people and he would want us to remain peaceful and prayerful during this most trying time for our family. Again, we sincerely appreciate all the love, feelings, prayers and energy that you are sending our way. This makes the difference and it is our hope that we can end this violence against our Native people here in Rapid City. Allen was a Sun Dancer and we want all prayer families, medicine men, spiritual leaders and sundancers to come and pray for our family and to keep Allen and his loved ones in your prayers.

Few details have been made about the nature of the interaction between Locke and the officer, aside from the official statement from the police department. A spokesperson for the Rapid City Police Department said that Officer Anthony Meirose was responding to the Lakota Homes to remove an unwanted person from a residence, but they did not say whether that unwanted person was Locke, or if Locke just happened to be at the wrong place at the wrong time.

Officer Anthony Meirose has been placed on paid suspension pending an investigation.

The racial group most likely to be killed by law enforcement is Native Americans, followed by African Americans, Latinos, Whites, and Asian Americans.