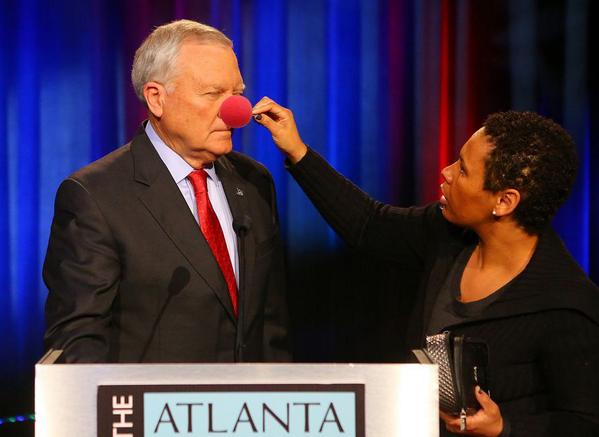 Unlike the circus like atmosphere of the previous debate in Perry, GA with thousands of raucous supporters, this debate was what you tend to normally expect with a much quieter and more reserved atmosphere. However, that did not stop the barbs or fireworks from flying.  The too-close-to-call contest between Republican Gov. Nathan Deal and Democrat Jason Carter is shaping up to be a referendum on the incumbent’s handling of education, the economy as well as Deal’s numerous ethics problems. The fact that an incumbent Republican governor in Georgia is in a close election at all speaks volumes about just how many Republican voters in Georgia are unhappy with Nathan Deal.

The “Ethically challenged” Governor came across as very defensive and was on the ropes much of the night. The 72 year old governor looked far older than his years which is why he likely tried to paint Carter as young and inexperienced in the earlier debate. That comment may actually backfire however because people in Georgia are ready for some new leaders with fresh ideas and a younger and far more energetic Governor could prove to offer a very fresh and compelling contrast. Deal seemed desperate and it showed. He also even seemed positively angry.

In the previous debate I scored it as a tie. The noisy crowds and disorganization of the debate offered no clear-cut winner. However, in tonight’s debate it was not even close.  Andrew Hunt was the clear winner and he definitively destroyed Nathan Deal. In all honesty, Deal probably inflicted as much damage on himself as did Hunt or Carter by insinuating that all Republicans are church going Christians who can vote after church and intimating Libertarians and Democrats weren’t. Carter came in a close second but needs to brush up on his delivery. I liked his answers but he needs a bit more polish and articulation at times. Dr. Hunt also made a few minor mistakes but he can more easily be forgiven as a political neophyte and also is not a lawyer. However, he did present himself as someone capable of doing the job as Governor and likely won over a lot of votes tonight with his performance.

I will post the best highlights of the debate as covered by Tweets in order to get this article to people that may not have been able to view it on TV or the web. I will also update this article with more info later.  Nathan Deal certainly though feisty at times was simply outclassed, outwitted, and outmatched by his younger and more nimble opponents tonight. He didn’t even seem to be drinking the kool-aid he was trying to get others to drink with his answers on the unemployment rate and ethics charges.

When pressed by Carter about the state’s stubborn unemployment rates — pegged at 7.9 percent for September — the governor called it an “outlier” statistic. “Unemployment rates are only good for political advertising,” Deal said. “Economists don’t pay any attention to them. (Yeah, keep telling yourself that Nate. I guess he believes if you tell a lie often enough even you start to believe it.

Deal later defended the 2013 sale of a salvage yard he co-owned to a Texas-based firm locked in a dispute with the state over as much as $74 million in back taxes. He called a TV ad by Carter’s campaign deriding the sale as a “typical illustration of the way that some liberals look at private enterprise.”

Carter stated that Deal’s resignation from the U.S. House that ended an ethics probe into the salvage yard.

“This exact business is the business that Governor Deal was using his position in Congress to make better,” Carter said. “He was run out of Congress to avoid an ethics scandal. It is a pattern. It is a practice.”

Hunt, a technology entrepreneur and also a PhD. from Georgia Tech said Deal lacks the firsthand knowledge to lead Georgia’s response. Hunt’s first question to Deal was the highlight of the debate and I am honored that he chose to take my advice and list off all those metrics and hit Deal with stats where Georgia is doing so poorly.

Andrew Hunt to Nathan Deal: “Mr. Deal, what we have is the highest unemployment rate; we have the highest poverty in the nation, poor education, expensive healthcare, ninth highest income tax — you promised a cut to the income tax — a corrupt state, high incarceration rate, $1,500 decrease in the income (of average Georgians), terrible Atlanta traffic. You promised limited government, but tax revenues have actually increased by $2 billion during your term,” Hunt charged. “You’ve dutifully glossed over this, but can you acknowledge these facts?”

Deal replied, “I reject your facts. I think they’re factually incorrect.” Well Mr. Deal, my facts Dr. Hunt quoted  are listed in the next section and I would love to see your links to counter them.

Deal scolded  Carter for not voting for this year’s budget in the Senate when it included a $547 million increase.

“If you really do support public education, you should have voted for the largest increase in K-12 funding in seven years,” Deal said to Carter.

To that, Carter said the budget still was $750 below the level specified in the state law known as Quality Basic Education.

“I could not vote for that,” he said.

My disappointment with Carter came from this quote. “With respect to marriage, I believe in both religious liberty and personal, and I don’t believe any government should tell a church or religious organization who it can marry,” Carter said. “But I do believe that when it comes to doling out rights, it should do it equally. I also take an oath to the constitution of Georgia and the United States. I would certainly continue to uphold the constitution as law as it remains valid under the law.”

I agree that no church should ever be forced to marry anyone which is a moot point since no one has ever asked for that. No one would expect Carter as Governor to violate the constitution but he could at the same time say that he would use the pulpit of his office to usher Georgia into the 21st century as around 30 other states have now done. He could follow the state constitution while still advocate for change instead of trying to straddle the fence with that answer.

I honestly do not understand the timidity of some of these Democrats that seem to try and woo homophobic and xenophobic voters with these Republican-lite type responses. Quite frankly if people like Barrow are so desperate to distance themselves from the party they should go ahead and switch parties. Yes I understand Obama is extremely unpopular right now but you also need to understand that unless you excite your actual base you will not win. All the people you are trying to sidle up to with these carefully worded or evasive responses are not going to vote for you.

Both Hunt and Carter also criticized Deal for not expanding Medicaid where the bulk of the added costs would be borne by the federal government. Carter said it would create 35,000 jobs and would allow Georgia to get money it is entitled to.

Deal noted that the money isn’t coming from Georgia taxpayers but from money the federal government is borrowing from China and other countries and that the state budget increased $350 million this year to comply with the Affordable Care Act. He then blasted Hunt for accepting $37 million in Medicaid grants to keep his company afloat.

Hunt adroitly replied  that Georgia is sending our money already to other states. Deal realizes that but has to cut off his nose to spite his face to keep his rabid anti-Obamacare base happy regardless that it is hurting our state. Georgia is missing out on an estimated $40 billion to our economy by not expanding Medicaid as well as keeping many poor uninsured. Hunt also mentioned that he was proud of the grants his company had won and they were badges of honor. Deal also had the audacity to challenge if Hunt was an actual Libertarian. Perhaps he would like to question the Republican credentials of John Kasich (R) of Ohio or Jan Brewer (R) of Arizona as well since they smartly chose medicaid expansion. They are also far more popular in their states than  Deal the Diddler.

There was also bizarrely a question thrown in about Todd Gurley and NCAA sports which seemed a bit out of place given the mountain of problems Georgia is facing.

All the candidates had a few strong and weak moments during the debate but as I said earlier I think Andrew Hunt stole the show with his question to Deal and his Ebola response. Deal diddled, ducked, and dodged as is his nature and Jason Carter got in a few good lines but desperately needs a debate/speech coach before the next debate. He is certainly not being properly prepped as he should. If he wants to win he will need to get a smother delivery down and have a lot more stats and zingers memorized to bash Deal over the head as Andrew Hunt demonstrated tonight.

Why did @NathanDeal wait until today to make an #ebola committee? Politics much? #gapol #WeKnowNathan

.@NathanDeal: I reject your facts and I bring forth these “facts” that I just made up! #APCDebates #gapol

Carter: Deal's business was why he was run out of Congress. Other ethics issues cost Georgians taxpayer dollars. GA deserves better. #gapol

Stunned @NathanDeal can talk about his business interests with a straight face. There are too many facts that counter his statement #gapol

Deal is bombing big time. No one is buying his snake oil anymore. He is floundering up there #APCDebates #GaPol #GaGov

“Unemployment rates are only good for political advertising, as a general rule.” – @NathanDeal

“Republicans can vote on Sundays too, just after they go to Church.” – @NathanDeal

Stop using facts. I reject them. RT @brythomas: How many times has Gov. Deal switched his position? Ebola and Sunday voting? #gapol