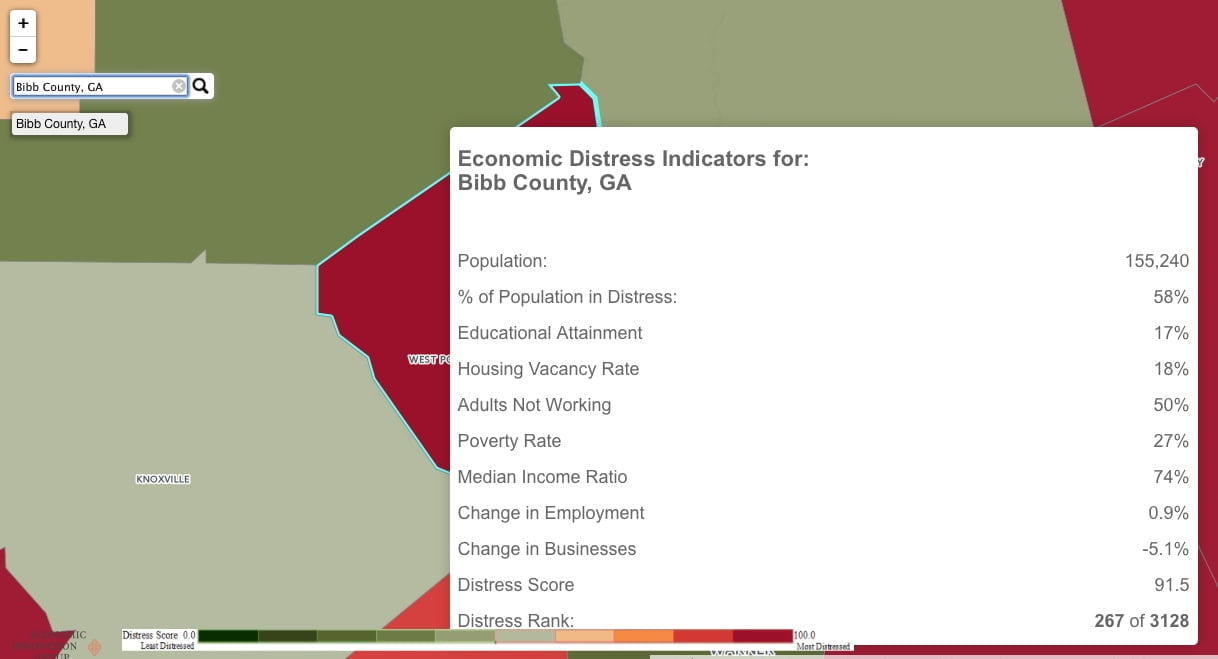 A follower of this blog sent me a very intriguing email with an article from one of the most widely quoted socio/urban planners in the U.S. by the name of Richard Florida. It happens to include an interactive map that allows you to zoom down to any county in the entire country for some very specific economic indicators. I have taken the liberty of posting a snapshot of  Bibb County which is the county that encompasses Macon, GA. Please note that you can zoom down even further by entering zip codes and seeing the same data specific to your zip code.

When you first click the link to the interactive map you will see the entire country. Areas of green are doing substantially better than the areas of the map colored in darker shades of burnt orange. This map is an eye opener when you can visualize the areas of desperate poverty which are to a large degree focused in the deep South.

In addition to this email I also received a second email from someone else coincidentally that addressed this very same concern about the direction of Bibb County. I will not disclose their name since this was presumably sent only as a comment to me privately and I do not not want to publish their name without their explicit approval. However, their comment was very salient and I thought it worth sharing within this article.

Comment:
Thank you for your logic on Macon’s predicament. Mayor Reicher has not helped, by endorsing every new tax on the table. Today my garbage bill is double, and splosts have reduced my living standards; appraisals are out of line with reality, forest hill is destroyed, and now a truck stop will be approved on in South Bibb. I truly believe this administration has been duped by the chamber of commerce. Residents are just a pain In their necks and no longer wanted. The middle class that can are moving just outside the county lines and so business follows. All that will be left is the very old, students, and the very poor. Now, how does this help Macon? It won’t.

You can see all comments on this post here:
https://gwmac.com/macon-5184/#comments

The remainder of this article is the report issued by Richard Florida who is the co-founder and editor at large of CityLab and a senior editor at The Atlantic.

Mapping  among the Most Distressed Communities in the U.S

Despite the economic recovery, the nation’s pattern of concentrated inequality has actually gotten worse, according to a new report.

More than 50 million Americans live in economically distressed communities, according to a startling new report from the nonprofitEconomic Innovation Group. The report, which examines economic distress across tens of thousands of ZIP codes, finds one-fifth them to be in economic distress. In the average distressed ZIP code, around 25 percent of adults lack a high school diploma, and a whopping 55 percent are not working.

The map below paints a stark picture of neighborhood distress and spatial inequality across the United States. Dark red shows the most distressed neighborhoods, light red reflects distressed places, relatively prosperous communities are in lighter green, and the most prosperous communities are in dark green. In the period of recovery following the Great Recession, the authors find, jobs in the median U.S. ZIP code grew at less than half the national rate. While some communities are currently enjoying the fruits of the recovery, others have sunk further into poverty. According to the authors, this pattern of distress vs. prosperity not only “diverges between cities and states but even more starkly within cities at the neighborhood level.”

The report’s findings are based on a new Distressed Community Index, which maps community well-being in the U.S. down to the neighborhood level. It covers over 26,000 ZIP codes, 3,000 counties, and nearly 800 cities based on data from the U.S. Census Bureau. Areas are scored based on an equal weighting of seven variables, including poverty rates, housing vacancy, unemployment, and changes in the number of local businesses.

Very few large U.S. cities have both high levels of prosperity and low levels of spatial inequality—meaning that advantage is generally concentrated in a select few areas. Just nine out of the nation’s 100 largest cities enjoy what might be termed inclusive prosperity, where the gains from economic growth are distributed broadly among residents. These are mainly smaller, more affluent places such Arlington, Chesapeake, and Virginia Beach, Virginia; Chandler, Gilbert, and Scottsdale, Arizona; Irvine, California; Madison, Wisconsin; and Plano, Texas.

The table below identifies the top 10 most distressed cities in the nation. As one might expect, the report again finds that “struggling Rust Belt cities in the Northeast and Midwest register the highest levels of economic distress.” Camden, New Jersey, takes first place with a distress score of 100, followed closely by Cleveland, Ohio; Gary, Indiana; and Youngstown, Ohio. Hartford, Utica, and Harlingen, Texas, secure the next three spots, while cities like Albany, Flint, and Detroit round out the top ten. All 10 of these cities have a distress score above 98.

The next table shows the top 20 most unequal counties in the U.S. This list mostly consists of Southern counties that include cities like Atlanta, Birmingham, Houston, and Fort Worth, as well as those in Rustbelt cities like Detroit, Cleveland, and Columbus, Ohio.

Ultimately, this important report goes to show that the geography of inequality across the U.S., even in the midst of recovery, is extremely spiky and characterized by areas of concentrated advantage and disadvantage. While some communities have been able to recover nicely from the Great Recession, others are in fact worse off than before. When all is said and done, too many Americans live in distressed neighborhoods and too few cities combine growth with inclusive prosperity.

2 thoughts on “Mapping Macon, GA among the Most Distressed Communities in the U.S”