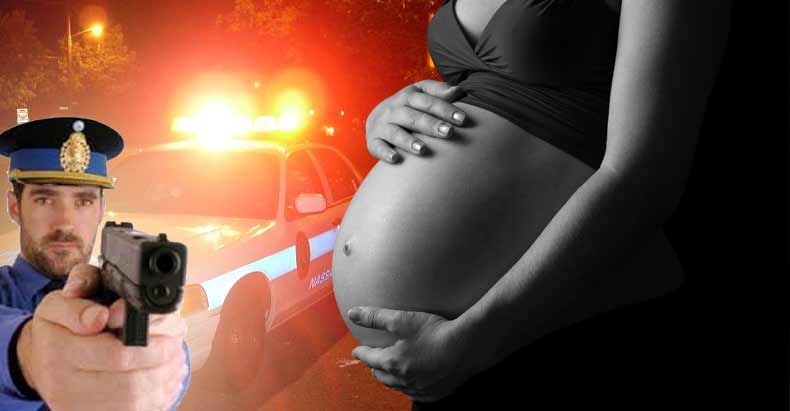 Cleveland Heights, Ohio– Samuel Taylor was almost to his home when Cleveland Heights Officer William Robinson pulled this father-to-be over and held him at gun point with his finger on the trigger. The man was driving 38 in a 25mph zone, only 13 mph over the speed limit, to get home to his wife who was in labor after a high-risk pregnancy.

When the officer attempted to pull Taylor over, he slowed down and put on his emergency lights, to indicate that there was an emergency. Taylor then turned onto his street and did not pull over until he reached his home since all of the street parking was full and there was not a safe place to stop.

“Officer Robinson approached me yelling at me to put my hands up and holding me at gunpoint as if I was threatening his life,” Taylor told Cleveland.com. “His finger was on the trigger,” he continued.

Taylor was threatened with felony charges for calling the police department as he plead with the officer for 20 minutes to allow him to go check on his wife, even inviting the officer in if he would just holster his weapon.

The officer searched Taylor and told him to remain in the vehicle then approached Taylor’s home, still holding his weapon. He was greeted by Taylor’s tearful wife begging for her husband and saying she needs help.

“My wife said, ‘I need my husband to come here,’” Taylor said. “‘I’m going into labor. Please tell me what is going on. I need help.’”

Taylor was handed a speeding ticket and a failure to yield for an emergency vehicle citation.

His wife ended up hospitalized due to complications and the police are of course, defending the officers actions and saying he followed protocol.

Just this week we reported on a dashcam video that was released of the death of Wisconsin man Casey Kressin. The officer involved was also “following protocol” as he stopped the car rushing Kressin to the emergency room for an asthma attack and refused to escort them or drive the man to the hospital. Kressin repeated “I can’t breathe” several times as he fell to the ground dying infront of the unsympathetic officer.

If this is protocol, then protocol needs to change.

As we pointed out in Kressin’s story- this is far too common.

Officers seem to have no problem “breaking protocol” if they feel their “lives are in danger”, so there is only one thing to say- if you will not break “protocol” to actually help instead of hurt in an emergency situation, don’t you dare call yourself a “good cop”. You can’t even call yourself a good person.

The Free Thought Project consulted a 30 year veteran of the California Highway Patrol on why cops would ever keep people from the hospital, just to write a ticket. Below is his analysis on the discretion that should be applied but is often not, during these kind of stops:

Painfully and regrettably, some officers:
A. Do not have good judgement
B. Are SO self-limiting with their Department policy . (Policy probably dictated that
all medical emergencies would be transported by ambulance)

You run into situations like this about once a month. You see a high speed driver, or the car is weaving through traffic at ten or more mph than the others.

You stop the car.

All are racing to hospital

Does it qualify for reckless driving and a citation? Yes–BUT

As a police officer/Law Enforcer, you should:

A: Ask yourself– What if that was me.. or my family?
B. What is public opinion going to be about this?

The answer I would have, is to put the patient in your patrol car and take him/her to the hospital ER. Instruct the driver –if there is one–to drive to that hospital, observing all traffic laws.
No driver? Lock it up, leave it there.

If this 30 year veteran can ask the question, “What if that was me.. or my family?” why can’t all of these other officers?