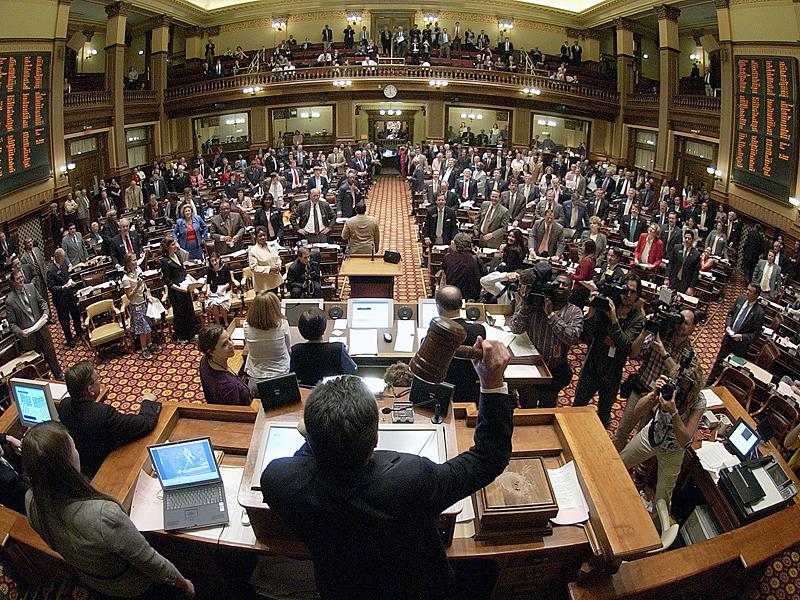 Below is a joint press release covering the accomplishments of the Georgia General Assembly this year after adjourning Sine Die.

Atlanta, GA – Today, Lt. Governor Casey Cagle and Speaker David Ralston (R-Blue Ridge) led the General Assembly to adjourn Sine Die for the 154th legislative session. This marks the end of a legislative year in which the General Assembly advanced reforms and investments that will benefit every Georgia family, and concludes the final session of an administration that has consistently delivered for Georgians by leading on the most important issues facing our citizens, creating nearly 700,000 jobs as the nation’s best state to do business, and generating a rising economic tide that has left our entire state better off than we were eight-years-ago.

Lt. Governor Cagle and Speaker Ralston joined the full House and Senate in honoring and commending Governor Deal for his leadership, recognizing his legacy and the many accomplishments they have advanced together for Georgia families. During the 2018 legislative session, Cagle and Ralston led the House and Senate to advance legislation to cut taxes, strengthen rural communities, invest in 21st century infrastructure across all of Georgia, make our state a national leader in education reform, and improve access to affordable health care.

“Leading together, we’ve been able to cement Georgia as the number one state to do business, deliver a historic $5.7 billion income tax cut, and create almost 700,000 jobs. By combining education reform that brings true local control to our schools – and building a climate that allows job creators and entrepreneurs to thrive in communities statewide – Georgia is driving a new kind of economic growth that has set us apart,” said Lt. Governor Cagle.

“Serving alongside Governor Deal and Speaker Ralston as Georgia’s Lt. Governor has been one of the greatest honors of my life. Concluding my final day presiding over the Senate, it’s never been more clear to me that Georgia is rising – not only as the best state for business – but by every measure as a nationally dominant beacon of opportunity. Governor Deal’s legacy will be defined by his unending devotion to building a strong economy that includes everyone who is willing to work for something better – understanding that all Georgians deserve to live with purpose in a free and fair society where hard work is rewarded. Governor Deal leaves behind a hell of a legacy – and I couldn’t be prouder of everything we’ve accomplished together,” said Lt. Governor Cagle.

“Whether it is making it easier for people to adopt children or encouraging job growth in rural Georgia, we’ve taken substantive action to make Georgia’s future brighter this legislative session,” said Speaker Ralston. “We have cut taxes on Georgians, fully funded K-12 education and invested in critical projects like deepening the Port of Savannah and supporting transit systems across the state. I appreciate the strong partnership with Governor Deal, Lt. Governor Cagle and my colleagues in the General Assembly which has allowed us to get these important measures to the Governor’s desk.”

“Governor Nathan Deal’s impact and legacy will be felt for generations in the ways that matter to Georgians,” said Speaker Ralston. “His was not always the easy or politically popular path. He has not only endured but triumphed over those whose political vocabulary knows only negativism. I want to thank him for 8 of Georgia’s greatest years. Wherever I go in Georgia, I hear people say – we are going to miss Nathan Deal. And we will.”

Highlights of the 2018 legislative session include:

•    Historic Income Tax Cuts: Because of a strong commitment to balanced budgeting and fiscal responsibility, Governor Deal, Lt. Governor Cagle, and Speaker Ralston enacted the largest income tax cut in Georgia history and the first rate cut since the individual income tax was established in 1937. This significant tax cut will be equal to nearly $6 billion in tax relief, representing an individual income tax cut that is more than $1 billion greater than the projected “windfall” from the federal Tax Cuts and Jobs Act.

•    Adoption Reform and Strengthening and Supporting Families Act: For the first time in a generation, Speaker Ralston and Lt. Governor Cagle advanced comprehensive adoption reform to modernize our state’s laws, streamline the adoption process for families, and provide safe and loving homes for children in every community. The Strengthening and Supporting Families Act puts families and communities first, allowing those closest to children in need to step up and provide short term care for individuals who need their love and support. As a result of these reforms, our state will be closer to giving every child the opportunity to succeed in a loving home.

•    Investing in 21st Century Infrastructure: To meet the needs of Georgia’s growing economy, the House and Senate led to enact a comprehensive infrastructure package that will significantly expand transit throughout Metro-Atlanta. This transformative transit plan – establishing the Atlanta-region Transit Link Authority (ATL) – will streamline and serve the needs of hardworking Georgians, respond to the demands of our employers and workforce, and reduce traffic congestion.

This legislative session marks the final legislative session during Governor Nathan Deal’s tenure as Georgia’s 82nd Governor. Thanks to Governor Deal’s leadership and collaboration with Lt. Governor Cagle, Speaker Ralston and the General Assembly, Georgians have benefitted from many conservative reforms and initiatives over the last eight years.

•    Criminal Justice Reform: Criminal justice reform has been key to reducing recidivism and getting non-violent offenders back to productive lives with their families. Through a combination of executive action and legislation, these reforms have expanded access to accountability courts, provided judges with greater discretion in sentencing and removed barriers to employment, housing and education for rehabilitated offenders.

•    Sound Fiscal Management: In 2011, when Governor Deal took office, Georgia was still dealing with the impacts of the recession and the state’s budget had to be cut dramatically as a result. Through conservative budgeting and strategic investments, the state’s depleted rainy-day fund has been replenished to a balance of more than $2.5 billion. This was achieved while maintaining Georgia’s AAA bond-rating – which saves taxpayers money and demonstrates the state’s sound fiscal position.

•    Transportation Infrastructure: Georgia has also reformed funding for its transportation infrastructure. Through the reforms in the Transportation Funding Act of 2015 (HB 170), Georgians are benefitting from the acceleration of several key projects designed to relieve congestion, improve freight logistics and further economic development. HB 170 was the product of a great deal of input from the business community as well as collaboration between the legislature, Governor Deal’s Office and the Georgia Department of Transportation.

•    #1 State in the Nation for Business: Perhaps most notable of all the achievements accomplished between Governor Deal and the General Assembly, nearly 700,000 private-sector jobs have been created in Georgia since 2011. Through a combination of robust economic development programs, pro-jobs tax environment and business-friendly regulatory reforms, Georgia has earned the title of “#1 state in the nation for business” for the last five years.