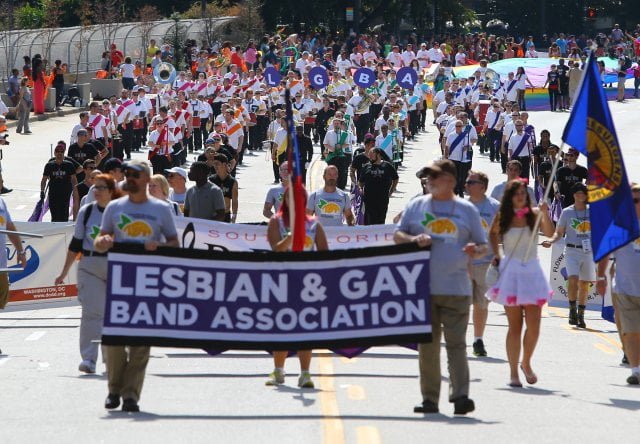 The Lesbian & Gay Band Association takes up the width of Peachtree Street in the Pride Parade earlier this month. Curtis Compton, ccompton@ajc.com

We try to stay away from newspaper endorsements, unless they are of the man-bites-dog variety. The editorial published Friday by the Georgia Voice, a newspaper and website directed at gays and lesbians in Atlanta, may fall into that category.

The newspaper advises its readers that neither Nathan Deal, the Republican incumbent governor, nor David Perdue, the GOP candidate for U.S. Senate, is worth their ballots. But the newspaper also specifically refused to endorse Jason Carter, the Democratic candidate for governor, or Michelle Nunn, that party’s U.S. Senate candidate. Read the entire editorial here.

The GA Voice has not and will never endorse candidates without speaking to them first. It is simply not fair to you, our readers, to do so. That is why we cannot endorse Jason Carter in the governor’s race. His campaign has ignored and denied numerous requests for an interview over several months.

This is not about sour grapes. It’s about not being able to ask him his thoughts and opinions on issues important to our community. We don’t know how he feels on issues such as HIV funding, employment non-discrimination, transgender rights, or a hate crimes law. Georgia is one of only five states in the nation without a hate crimes law.

There is major confusion about Michelle Nunn’s views on marriage equality. She and her campaign denied or simply ignored requests from the GA Voice for interviews to discuss marriage and other issues important to LGBT people.


She began her campaign by saying she supported states’ rights when it comes to same-sex marriage. Supporting the idea that it is okay to put equality up to a vote is not something we cannot accept or endorse.

Neither Nunn, nor Carter, showed up at Atlanta Pride, where they could have greeted tens of thousands of prospective voters. Having supporters carry their signs in the parade is not enough to earn our votes in 2014; not even in Georgia.

The newspaper’s only endorsement? Greg Hecht, the Democratic candidate for attorney general:

Hecht is the only major Democratic candidate in this race who has both talked publicly to the gay media and stated publicly his support for marriage equality. He also promises not to defend the state’s same-sex marriage ban if elected.