Cops Are Scanning Social Media to Assign You a “Threat Rating” 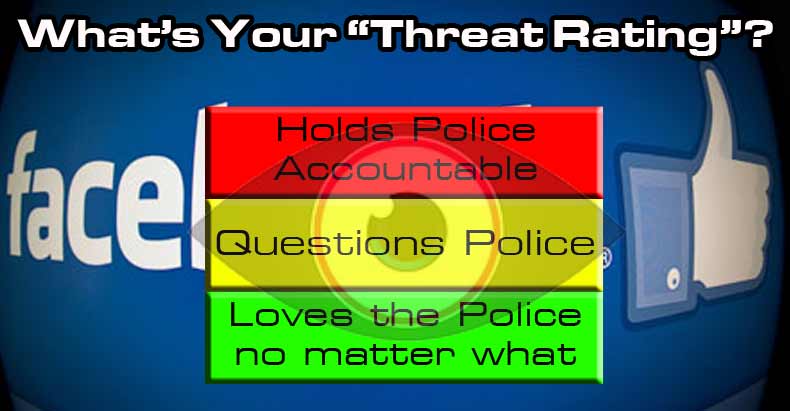 Online activity, purchases, and “comments that could be construed as offensive,” all contribute to your threat score.

Police State, USA — Imagine the following scenario: You are on your way home from work, driving down the road, when you notice police lights in your rear view mirror. You are being pulled over.

As you sit their, on the shoulder, adrenaline rushing, simultaneously angry and nervous, the police officer, in his patrol car behind you, is sizing you up based on an algorithm that determines your “threat rating.”

The officer enters your license plate into a mobile application on his laptop. In a matter of seconds, this application crawls over billions of records in commercial and public databases, including all available social media engagement, recent purchases and “any comments that could be construed as offensive.” The application then determines if your “threat rating” is green, yellow, or red.

Your rating just came back red.

Up until this point, you have never committed a crime, you have never called for violence, you have never even so much as run a stop sign. However, this police officer now knows that you made a comment about him punching the (insert handcuffed and helpless victim example here) on facebook, and he literally sees red (your threat rating).

What happens next? Does a routine traffic stop for driving 10 miles over the speed limit morph into a situation in which you now have a Smith and Wesson M&P 9mm pistol with Streamlight TLR-2s laser site being aimed just above your left ear?

Do you receive multiple erroneous citations because this officer now has access to your personal life? Do you get cited where the officer would have otherwise let someone else go?

The reality is, that any number of unimaginable things can and would happen next. And now, thanks to a particularly ominous product, by a company named Intrado, and the Orwellian nature of police in this country, those unimaginable situations are now a reality.

Intrado is one of many corporations thriving here in the US, from the creation and growth of the police industrial complex. The hypothetical “application” mentioned in the above scenario is a real product of Intrado, called Beware. Police departments nationwide have been purchasing and using this application since 2012.

Intrado is one of many companies who cater to the police state, giving police these ostensibly helpful tools which actually erode civil rights and leave a huge opening for corruption and abuse.

Private companies are currently, and have been acquiring large portions of your tax dollars from federal grants. These funds are in return being used to build and implement actual “Pre-crime” technologies.

No, not the psychic-based sci-fi pre-crime like in Minority Report, but actuary based mathematical and statistical assessments designed with the explicit goal to reduce future instances of criminality. This means that instead of sentencing people for crime already committed, sentences based on these risk assessments are instead sentencing people for crimes that they, or people like them, might commit.

In a society that claims justice to be blind, how does judging someone on what they might do fit in to the idea of freedom? The answer to that question is simple, it doesn’t.

Even if these “threat ratings” showed a statistical correlation to actually lower some instances of crime, which we have not seen, it’s not the right way to go about policing a people. Reason Magazine’s Peter Suderman sums this logic up quite eloquently:

By a roughly similar logic, we could lock up everyone—or even just everyone with the right risk profile, regardless of what crimes they have or have not already committed—from a high crime neighborhood, and call it a success when crime goes down.

The notion that this “surveillance grid” approach by police and their higher-ups, is for the safety of the people, is a total farce. It does little to nothing to protect society from a rogue criminal. What is does do, however, is protect the government by deeming large groups of people an enemy of the state; regardless of whether or not the individuals in these arbitrary groups are peaceful or have committed a crime.

The bright side of this Orwellian nightmare of a total police state that locks us up for crimes we didn’t commit, is that it’s preventable. All we have to do is show this information those who have yet to see the encroaching blue leviathan that is Orwell’s proverbial “boot stamping on a human face — forever.”

Depsite the Bellingham police department receiving a $25,000 federal grant to cover some of the $36,000 annual cost of Beware, the citizens still said “nay.” At a mandatory hearing about the purchase from Intrado, Bellingham citizens discovered how Beware worked and opposed the purchase.

Bellingham is a beautiful example how we win this assault on freedom and prevent the continued expansion of the total police state.

The choice is ours to make. The police state didn’t suddenly pop up overnight. It’s a product of society, more accurately, it’s a symptom, of a sick society, that we are all complicit in creating.

Our only means of changing this sick society, is changing ourselves. We have to remove our dependency upon a group of people who use violent coercion to achieve what they refer to as “order.” When enough of us do this, the police state becomes irrelevant.

To quote Butler Shaffer from his eye-opening book, The Wizards of Ozymandias, “We will not become free when the state goes away. Rather the state will go away once we are free.”