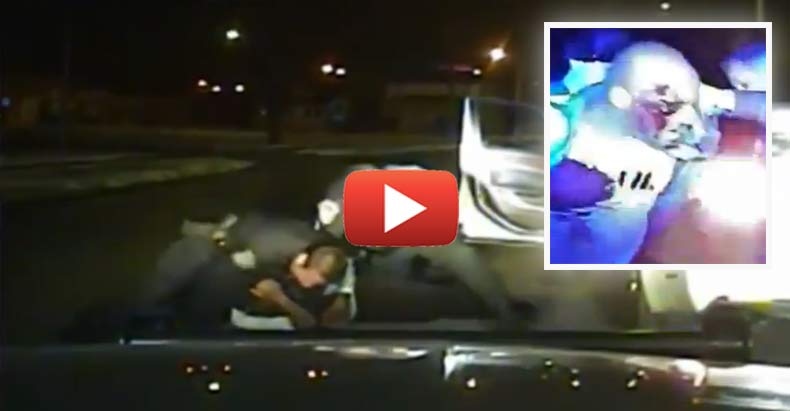 The incident began after police said 57-year-old Floyd Dent, improperly stopped at a stop sign, so they pulled him over.

When Dent stopped, two officers approached with guns drawn. He was yanked from the vehicle, thrown to the ground, choked, and severely beaten.

“The next thing I know, the officer runs up to me with his gun, you know, talking about blowing my head off,” Dent said. “Then he grabbed me out of the car and started beating on me, you know. I just couldn’t believe it.”

As the original two officers choked and beat Dent, “back up” arrived to join in on the lynching. Dent was subsequently tasered, three times.

“I’m lucky to be living. I think they was trying to kill me, especially when they had choked me. I mean, I was on my last breath. I kept telling the officer, ‘Please, I can’t breathe,’” Dent said.

Police originally claimed that they were acting in self-defense and charged Dent with resisting arrest, assault on an officer, and fleeing police. All of these charges would later be dropped after the judge watched the video. However, police claim they found crack in Dent’s car and he still faces a possession charge.

Dent claims that cops planted the crack in his car, and he has evidence to back this up.

Unfortunately for police, Dent, who recently retired after 37 years with the Ford Motor Co., has no criminal record at all. He also asked for a blood test at the hospital to confirm that he does not do drugs. The blood test confirmed that Dent was indeed telling the truth.

“I don’t have to sell drugs. I don’t sell drugs,” Dent said.

The officer who had Dent in the chokehold has previously been accused of planting drugs and lying. In 2003, he was charged by the U.S. Attorney’s Office for planting evidence and falsifying reports. However, being that cops are rarely found guilty of anything, he beat those charges.

But this is not stopping Dent from fighting the drug charges. The county offered Dent a plea deal that included probation and expunging the incident from his record six months from now. But he turned it down. Dent refuses to plead guilty to something he did not do.