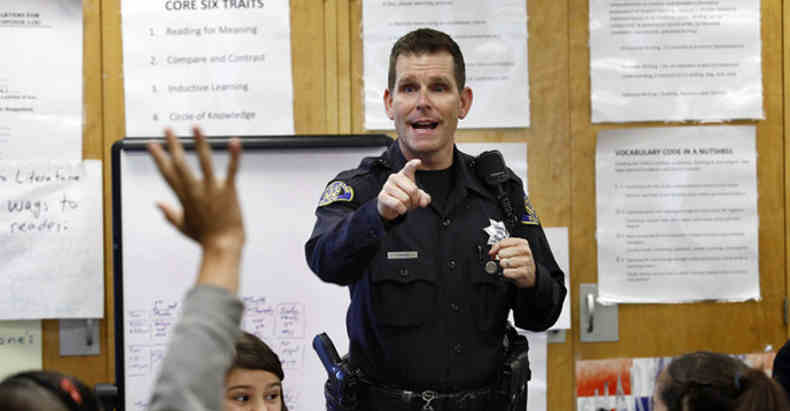 San Jose, Calif. – In another callous display of cop logic, San Jose police officer Phillip White made threatening tweets directed at those protesting the recent non-indictment of officers this past weekend.

The response from social media was swift, with strong condemnation of his threats. White is learning just how far reaching words on social media can be, as an online petition demanding his firing has garnered 15,000 signatures.

White, has been engaged in a protest bashing and seemingly racist twitter storm for some time now.

After community leaders became aware of the threatening tweets they called on city officials to fire the officer. In short order, White was placed on administrative leave (paid vacation), as furor over his tweets reached a fever pitch.

“It is extremely important for the community to know the comments made on Officer White’s private social media account do not reflect the thoughts or feelings of the men and women here at the San Jose Police Department,” San Jose Police Chief Larry Esquivel said, according to CBS News..

In addition, White’s police union also spoke out against his social media threats, without naming him, releasing a statement that read,

“Offensive, disrespectful and inappropriate social media comments have no place in the public discourse surrounding the tragic loss of life from recent officer involved incidents. We condemn these comments.”

White also criticized and insulted the basketball players from the University of California, Berkely, for practicing their free speech.

Ironically and ignorantly White tries to tell the students that it is his tax dollars and those from other cops which pay for their college. Apparently he doesn’t realize that his entire paycheck is funded off of the backs of taxpayers.

White had also been a basketball coach at Menlo College but since this incident, he has been released from those duties.

One of the most ironic parts of this entire episode is that White had been involved in a gang prevention and education course for school children, in which he stressed personal responsibility, according to the Huffington Post.

Perhaps White should have taken his own advice when in one of those courses, which was video uploaded on October 31st, he said,

White’s actions are indicative of the all too common us vs. them mentality that is prevalent in U.S. law enforcement.

Perhaps if cops proactively looked for potential solutions to the problems being demonstrated against rather than taking a tough guy stance and threatening people, they would most likely have better results and less of a public relations nightmare on their hands.

But as we’ve seen from the recent lashing out by police unions across the country, the act of diplomacy on behalf of law enforcement is all but non-existent.