Broadband findings you may have missed 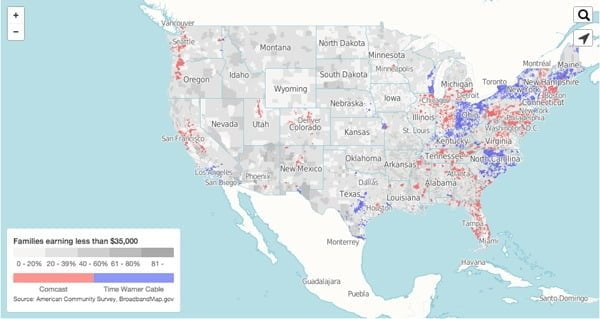 2014 was a big year in Internet governance.

The debate surrounding network neutrality heated up and voices from all over the political spectrum made themselves heard. With those developments in mind, the Center for Public Integrity began investigating the political power of companies in the information technology industry in late 2013.

Here are some of the most interesting findings that will help determine America’s digital future:

In exchange for control of about 40 percent of U.S. Internet users, Comcast Corp. offered to extend its low-cost service, Internet Essentials. The problem, activists say, is that the program’s results aren’t all that impressive. Only 12 percent of the eligible population was participating as of earlier this year. Comcast’s $18.8 million in lobbying in the year prior may prove more effective in convincing the FCC to approve its purchase of Time Warner Cable Inc.
Keep reading

When the city of Tullahoma, Tennesee, wanted to offer its high-speed Internet option to areas outside the city limits, lawmakers first had to deal with a law from 1999 that restricts the power of municipalities to offer Internet service. That law, combined with pressure from telecommunications lobbyists, has so far blocked expansion.

20 states have similar laws that ban or restrict city-run networks, despite the fact that many private providers do not offer the full range of services to the areas in question. This is thanks to the influence of the telecommunications industry, one of the most powerful lobbying groups in the country.
Keep reading

Improved relations with Iran through Clash of Clans