An Explanation On Why Being Poor Can Be Very Expensive 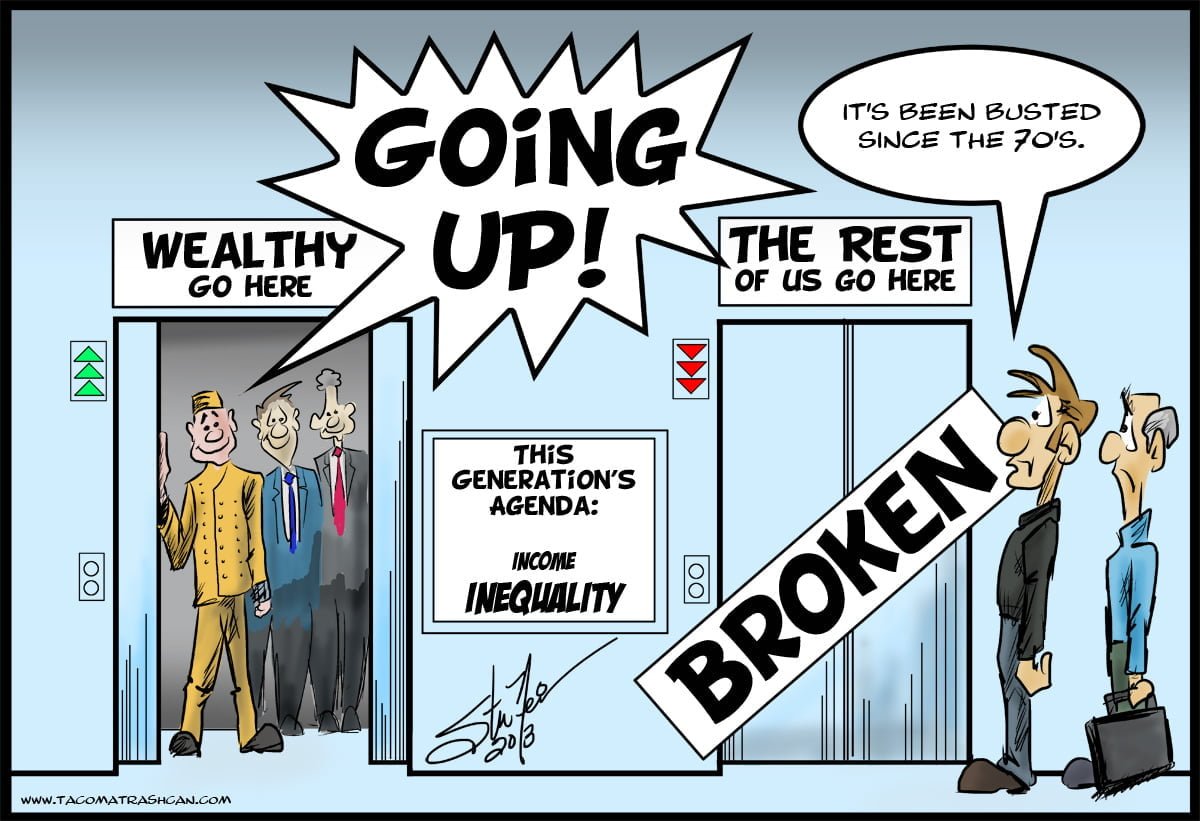 I read an op-ed piece on the New York Times today about this subject and it got me thinking. A few of the reasons he cited included taxes and the fees for being “unbanked”. As today is MLK day I decided to write my own article and assessment with a completely open mind. Martin Luther King Jr.  fought for more than just civil rights. He also hoped both poor black and white people would have a chance to climb their way out of poverty which is the biggest enemy to all of us. He also understood education was the key. Increasingly that has been much harder to do. After his death in 1968 the income inequality gap has grown rapidly and is now the highest it has been since 1928 which preceded the Great Depression.

A tax institute conducted a study and found the poorest fifth of Americans will pay on average 10.9 percent of their income in state and local taxes, the middle fifth will pay 9.4 percent and the top 1 percent will average 5.4 percent.

“Virtually every state’s tax system is fundamentally unfair,” the report concludes. “Unfair tax systems not only exacerbate widening income inequality in the short term, but they also will leave states struggling to raise enough revenue to meet their basic needs in the long term.”

It explained the reasons for this unfair burden on the poor on regressive systems that rely heavily on sales and excise taxes that are applied to things like gas, alcohol, cigarettes. It is the same rate for billionaires or for the desperately poor trying to just put food on the table. Another area that hits the poor hard is property tax. A poorer families biggest asset will be their home. By contrast the wealthier families largest assets will likely be their stock portfolio, bank account or other investments.

This tax study looked at the bottom 10 “worst offender” states and determined the bottom 20 percent of wage earners pay around seven times as much of their income in taxes as the top 1 percent. In Washington for example the poorest wage earners had to use around 16.8% of their income in taxes while the wealthiest used only 2.4% when you include all local, state, and federal taxes together. That is a substantial gap.

The Biggest Income Inequality Gap Since 1928 Income inequality has become a major issue over the last decade after it became widely known that the U.S. has among the largest disparities of income inequality in the world and also far higher than our own recent history. In fact the 1950’s where we have had some of the highest tax rates ever saw our economy boom and we also had some of the lowest disparity in income between the very rich and very poor.

Wealth in the 1950s was far more evenly distributed than it is today. That’s no surprise, of course. But what should shake us somewhat is the fact that hardcore conservative activists ranting against socialism and communism back in the 1950s were compelled to defend the virtues of the American system by pointing to its equitable distribution of wealth.

Rising Democrat star Senator Elizabeth Warren had this to say: “starting in the 1980s Republicans took the country in a different direction, beginning with the decision to “fire the cops on Wall Street. “They called it deregulation,” Warren said, “but what it really meant was: Have at ’em, boys. They were saying, in effect, to the biggest financial institutions, any way you can trick or trap or fool anybody into signing anything, man, you can just rake in the profits.”

Americans used to think you could always work your way out of poverty and that still sometimes happens. But on average the poor will live in more dangerous neighborhoods and their children will attend much worse schools that makes that climb infinitely harder than in the past where even poor neighborhoods could count on a decent school. That is no longer the case as our education infrastructure crumbles and we fall further and further behind other countries. The American Dream is now much less attainable than it used to be.

Former White House Council of Economic Advisers Chairman Alan Krueger estimates that “the persistence in the advantages and disadvantages of income passed from parents to the children” will “rise by about a quarter for the next generation as a result of the rise in inequality that the U.S. has seen in the last 25 years.

The U.S. was ranked the 41st worst among 141 countries (30th percentile) on income equality measured by the Gini index. The United States had one of the highest levels of income inequality among similar developed or high income countries. But what may be even more troubling is the comparison to our own historical record. U.S. income inequality has been increasing steadily since the 1970s, and now has reached levels not seen since 1928. In 1928, the top 1% of families received 23.9% of all pretax income, while the bottom 90% received 50.7%. But the Depression and World War II dramatically reshaped the nation’s income distribution: By 1944 the top 1%’s share was down to 11.3%, while the bottom 90% were receiving 67.5%, levels that would remain more or less constant for the next three decades.

Why is being “Unbanked” or “Banked” Expensive When You Are Poor

As the St. Louis Federal Reserve pointed out in 2010: “Unbanked consumers spend approximately 2.5 to 3 percent of a government benefits check and between 4 percent and 5 percent of payroll check just to cash them. Additional dollars are spent to purchase money orders to pay routine monthly expenses. When you consider the cost for cashing a bi-weekly payroll check and buying about six money orders each month, a household with a net income of $20,000 may pay as much as $1,200 annually for alternative service fees — substantially more than the expense of a monthly checking account.”

Even when the poor can manage to open a checking account they will often be hit with fees they can ill-afford. For example, failure to maintain a minimum balance results in a hefty monthly charge. Re-ordering checks, ATM fees also can add up fast when every penny counts. Bouncing a check can result in a fine of around $35 or even higher even though it costs the bank nothing to determine their are insufficient funds.The poor are also the ones most like to bounce a check as they struggle from paycheck to paycheck. One sick child for a few days and staying home from work to care for them can easily have a cascading effect resulting in bounced checks.

The poor are also more likely to be fined for moving traffic violations and other minor offenses. The poor are disproportionately  targeted by the police at much higher rates than the wealthy. Expensive fines and court fees for a broken taillight for example can be nearly impossible for a poor family to pay which can result in the loss of a driver’s license. Having no driver’s license is among the biggest barriers to getting and maintaing a job.

The great equalizer in the U.S. and the way to move out of poverty has always been education. You work hard, get good grades, and you climb the ladder out of poverty. That has always been the conventional wisdom, but that is much harder to do than it used to be. As the Institute for College Access and Success noted last March: “Graduates who received Pell Grants, most of whom had family incomes under $40,000, were much more likely to borrow and to borrow more. Among graduating seniors who ever received a Pell Grant, 88 percent had student loans in 2012, with an average of $31,200 per borrower. In contrast, 53 percent of those who never received a Pell Grant had debt, with an average of $26,450 per borrower.”

There are many other hardships associated with a life in poverty. Lack of adequate healthcare, a higher rate of diabetes and high blood pressure, depression, higher rates of alcoholism and drug addiction to escape the depression, more peer pressure to go off the path towards bettering yourself in school, more singe-family homes, the list goes on and on. Kids growing up in poverty have a very hard time ever escaping. Some fortunate few do manage to escape but they are the exception and not the rule.

The lesson to be learned here is that It is very expensive to be poor.