Monroe County Georgia Not Known For Open-Mindedness or Toleration 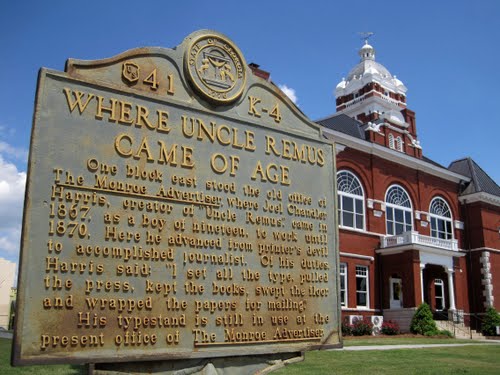 Editor’s note: The following article was written by a retired African-American teacher of 31 years that taught at Mary Persons High School in Forsyth, GA which is in Monroe County. It was written after the local homophobic newspaper editor named Will Davis of the Monroe County Reporter began a yellow journalism crusade to “out” the gay superintendent and presumably garner public sentiment towards having him fired.

I worked under Mr. Pack the last year I taught in Monroe County and found him to be a very capable and professional administrator. If anyone knows Monroe County from an outsider’s perspective, I do. I taught high school at Mary Persons for 31 years, but I never lived in the county. I commuted from Macon, via 475 and I-75, and the reason I did was because of people like Will Davis. Monroe County has some nice people, but it isn’t a place known for open-mindedness or toleration. Most who live there are typical tea party types who are afraid of expressing any opinion that varies from GOP/Fox News talking points.

The worst day of my 31 years at Mary Persons occurred the day after Barack Obama was elected to the presidency in November 2008. The atmosphere at MPHS was downright funereal. Most of the teachers, office and lunchroom staff were in mourning. These were people I thought accepted me as their equal because after all, they were quick to talk about how “Christian” they were. Well, on that Wednesday, I discovered that my being black mattered to them, a whole lot.

They weren’t speaking to me and avoided looking at me. It was as if Obama’s election was something to be ashamed of, and because I’m also black, I was being held responsible for his winning the presidency. Some of the black students approached me quietly and told me that some other teachers were saying ugly things about Obama, and that they weren’t hiding it.

I’ll never forget the woman in the serving line in the lunchroom, and the way she looked at me, turned her eyes to slits, shook her head and glanced away from me. I saw the hatred toward People of Color in her eyes and mannerisms. Now, I knew this woman. I went through her lunch line everyday and we had a short chat every frigging day. She sold cakes to supplement her income, and I would buy them from her, not because I needed them (I’m diabetic,) but to help her out. None of this mattered after Obama won the presidency. I stopped going through her line, and after a few months, she “invited” me to return to her lunch line. I did, but I will never forget the way she revealed her true feelings to, and about, me. She showed me that in spite of what I had thought was a decent relationship between the two of us, to her, my race made a huge difference in her ability to accept me as a human being and her equal.

I was glad that the 2008-’09 school year was my last year working in Monroe County. I remember that shortly after I began working there in 1977, my dad offered to build a home for me on Pea Ridge Road. His plan was to build a home for himself and my mom, and one for me next to it. I told him that I never wanted to live in Monroe County. I knew soon after I started working there that Christianity was only something they used to justify their homophobia, hate, prejudice, bigotry, stereotyping, scapegoating, and discriminatory practices.

Will Davis, editor and publisher of the Monroe County Reporter,  has lot of supporters in Monroe County, and even if some of them know what he’s doing to Mr. Pack is wrong, they’ll never open their mouths to defend Mr. Pack, and that’s the thing Monroe Countians should be most ashamed of.

Editor Note: This was a comment left under this article. Monroe County Reporter Editor’s Homophobic Twitter Feed If you are unfamiliar with the impetus for this comment, the editor of the local and only newspaper in Monroe County, Georgia appears to be a homophobic right wing radical based on his tweets and recent actions. He decided to “out” Anthony Pack the local superintendent of schools by way of sleazy journalism. He published an article based on innuendo and anonymous sources. The articles was not published because it was news, but rather because of his contempt for gay people in general it would appear. Will Davis also appears to be a big supporter of Erick Erickson and the Religious Hate bill known as S.B. 129.