Georgia “Religious Liberty” Bill is Anything But 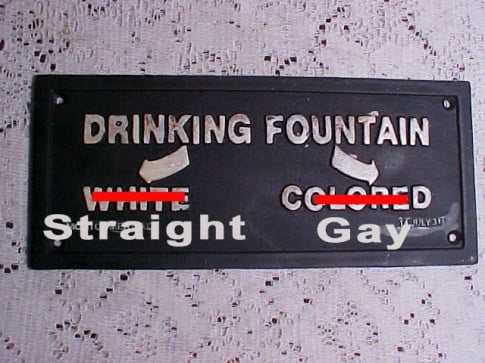 A so-called “religious freedom” bill is back on the table after failing to get traction last year. Even many Republicans including the speaker of the House David Ralston tends to think it would do more harm than good. This bill is nothing more than pandering to the fringe right. What does this bill do that the Constitution doesn’t do? Although that is a rhetorical question, the answer of course is it does nothing, well besides weaken it.  The bill sponsors, Sen. Josh McKoon (R) from Columbus and Rep. Sam Teasley (R) must think they can improve the Bill of Rights.

Today the AJC reported that Nathan Deal also tacitly supports this bill. As I said in my tweet in response to this news, you cannot be partially pregnant. You either are or you aren’t. There is no in-between. The same applies to this bill. Words like “tacit” attempt to soften the severity as if you support something but have reservations. This is not an issue where you can be ambiguous. Either Nathan Deal supports an anti-gay bill or he doesn’t. But just like his reluctance to tell where he really stood on the medical cannabis bill until the last minute it appears he wants to continue to lead from the sidelines on this issue as well until he finds out which way the wind is blowing.

A similar bill in Arizona was vetoed by their Governor Jan Brewer but Deal seems to be suggesting he would sign this into law if passed here. After her veto she gave the following statement.

“To the supporters of the legislation, I want you to know that I understand that long-held norms about marriage and family are being challenged as never before. Our society is undergoing many dramatic changes,” she said. “However, I sincerely believe that Senate Bill 1062 has the potential to create more problems than it purports to solve. It could divide Arizona in ways we cannot even imagine and no one would ever want.”

The true intent of this bill in Georgia

is to legalize anti-gay discrimination with a catchy name that includes “liberty” in the name and allow bigots to openly discriminate. This same bill was introduced last year and met opposition from many business and even religious groups because of these very concerns. Both the Georgia and the Atlanta chambers of commerce spoke up strongly against this bill last year because they knew it would have a serious recruiting penalty for Georgia trying to attract new companies.

Companies would be reluctant to move to a state that codifies the ability to discriminate against gay citizens at a time when marriage equality will soon reach all 50 states including Georgia. Would Mercedes-Benz for example have come to Georgia with this bill given their corporate policies on equality for their gay employees? Doubtful. It is no longer a question of “if”marriage equality will happen but “when”. This bill is a step backwards. It casts a negative shadow over the entire state and reinforces the stereotype that Georgia is a backwater state controlled by bigots after Georgia has tried hard to fight  to change that image that began with the movie Deliverance.This bill would be a step backwards towards our banjo days.

This bill has already been defeated twice. Just recently the Atlanta Fire chief was justifiably fired. The fringe groups that support this bill are now making him the poster child to get this bill passed. I guess they must think the third time is the charm. The fact that the anti-gay, anti-women, anti-semitic fire chief also disobeyed direct orders and protocols and was fired for those reason is inconsequential to his supporters. They are trying to portray Cochran as a victim, hero, and martyr when in point of fact he was simply insubordinate and a bully. He was not fired for his religion, he was fired for his insubordination and failure to follow orders.

The U.S. Constitution has done a pretty fine job of protecting religious rights and liberties for a very long time. We should all be extremely leery of the likes of McKoon and Teary trying to add their own spin. In point of fact, if they are allowed to get their way and Muslims, Buddhists, and others could then use it to discriminate against Christians. They would then likely see the folly of this bill when it can be used against them. We need bills that unite not divide us as a state or as a nation.  This intolerance bill ( a much better and more accurate name)  would open a Pandora’s box in terms of the ability of businesses to operate under their own isolated tents of discrimination. Supporters also count on the fact that Christians will forever be the majority in the U.S.which is not likely in the long term.

Everyone already has the freedom to practice and speak out about your religious views. All this bill is attempting to do is impose a type of sharia law with a Christian spin and a snazzy name. Don’t be fooled. This bill would be just as harmful to Christians as to homosexuals which are the ones they hope to target.

Contact your Georgia state rep or senator and let them know you support true religious liberty because you oppose this bill. Don’t let Georgia become the laughing stock and fodder for national media. This bigoted bill must be stopped  for the third and hopefully final time.

This chart below shows the slippery slope and what harm the fringe have already done to weaken the constitution and in turn their own religious liberty.

View as PDF: The Never-Ending Spiral of Extreme Religious Liberty